The landscape of China today is rich with the archaeological remnants of its ancient past. For example, China is home to such archaeological and architectural wonders as the Great Wall of China and the great Terracotta Army built to guard the tomb of the first imperial emperor of dynastic China. But what dynasty commissioned the Great Wall of China and other grandiose structures? The Great Wall of China was built over many dynasties throughout 2000 years; however, it was first commissioned by the first Qin Dynasty ruler. The focus of this lesson is the rise and fall of the Qin dynasty. First, a simple Qin Dynasty definition is the first dynasty of Imperial China that followed the Warring States period and previous dynasties of Ancient China. It lasted only a short period from 221 BCE to 207 BCE. The Qin dynasty dates saw many notable events such as Ying Zheng proclaiming himself Shi Huangdi or the '' first emperor,'' and the introduction of legalism in China.

The Ruler of the Qin Dynasty

Ying Zheng was the first Emperor of Imperial China who is formally called Qin Shi Huangdi or the '' First Qin Emperor.'' Ying Zheng obtained his seat on the throne by unifying China after defeating six other competing states within China during the Warring States Period which lasted from as early as 481 BCE to 221 BCE. During the latter years of this period, Ying Zheng ruled over the southwest portion of China at the time. The other regions were broken up into states under the Han, Chu, Wei, Zhao, Yan, and Qi. Ying Zheng defeated the Han in 230 BCE, the Zhao in 228 BCE, the Wei in 225 BCE, Chu in 223 BCE, Yan in 222 BCE, and finally the Qi in 221 BCE. Upon doing so, Ying Zheng proclaimed himself Shi Huangdi and established the first Imperial Dynasty in China - the Qin Dynasty.

Although many changes increased the innovation, economy, and construction throughout China, Qin Shi Huangdi also had a tyrannical legacy. Although Qin Shi Huangdi encouraged innovation and science in many aspects, he also suppressed all aspects of freedom of speech, burned books, and executed scholars with whom he disagreed. 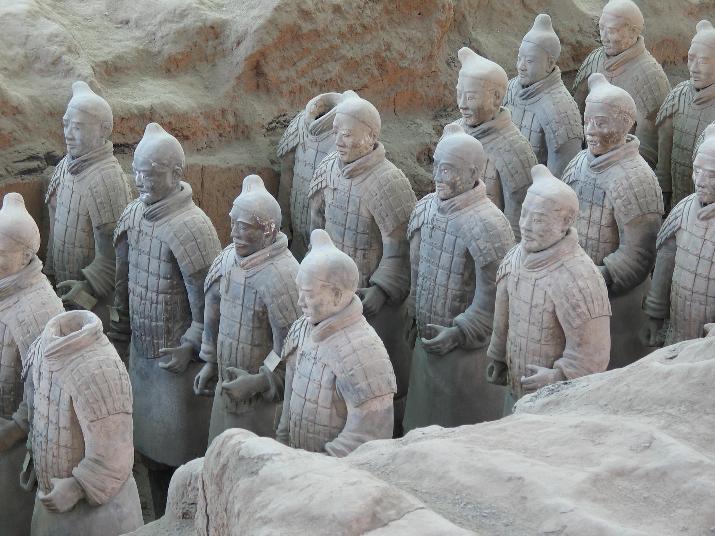 Coming up next: The Han Dynasty in China: Characteristics, Wu Ti & Xiongnu

What Dynasty Commissioned the Great Wall of China?

Qin Shi Huangdi's tyranny is critiqued by historians as coming from some egoism or delusions of grandeur. They describe him as interpreting the Mandate of Heaven in ways that only justify his power and importance. However, Qin Shi Huangdi took up grand architectural projects which would last millennia, such as the initial construction of the Great Wall of China. The construction of such grand projects also demonstrates Qin Shi Huangdi's cruelty, indifference, and tyranny. The Qin dynasty Great Wall today still stands but is greatly eroded. The Great Wall of China as seen today is mostly due to later dynasties that built upon the Qin Dynasty's initial idea.

Qin Shi Huangdi ordered thousands of workers to begin construction on the Great Wall around 218 BCE as a means to defend his borders from northern invaders. Those who worked on the Wall and other public projects, such as canals and roads, were paid little. After a while, the workers were just absorbed as conscripts who labored for communal lodging and small portions of food. Many died due to the poor labor conditions. Many other aspects of Qin Shi Huangdi's rule were also harsh, such as the laws that were implemented.

Legalism is a philosophy of rule that regards the state as being more important than the citizen or individual. Qin Shi Huangdi implemented a form of legalism that was advocated by previous rulers. The new Qin dynasty legalism dictated how people were allowed to speak, interact with each other, express themselves, and educate themselves.

The legalism philosophy influenced Qin Shi Huangdi's rule by creating harsh and uncertain circumstances for the people living under his rule. Confucian scholars and other intellectuals criticized She Huangdi's regime and compared it to the Warring States Period and the dynasties before it such as the Zhou Dynasty. Though the Zhou dynasty was a feudal system, this created a decentralized government system where states had some autonomy. According to scholars, this led to much prosperity under all social classes in the Zhou period. Qin Shi Huangdi's Mandate of Heaven combined with legalism turned all social classes into slave-like conditions. E.g., nobles, merchants, and scholars alike had their speech suppressed. All sorts of works except books on medicine, science, and agriculture were ordered to be burned. Individuals could face execution if they were caught hiding forbidden books.

Fall of the Qin Dynasty

The Fall of the Qin Dynasty began around 213 BCE as a few attempts were made on Qin Shi Huangdi's life. Because of this, his behavior began to become more erratic and in the direction of paranoia and anxiety. His policies became stricter, and he increased his guards and security. Qin Shi Huangdi became obsessed with immortality and ordered the construction of his Terracotta Army of 7,000 warriors to be constructed to guard his grand tomb.

On one of Shi Huangdi's trips, he accidentally drank an elixir of mercury, which killed him. Afterward, his prime minister Li Siu attempted to cover up his death by bringing his body back to the capital in a wagon of dead fish which hid the smell of Qin Shi Huangdi's corpse. Qin Shi Huangdi's son Fusu was supposed to be the heir to the throne, however, Li Siu changed Shi Huangdi's will so the younger son Hu Hai was named heir. Li Siu did this because he feared Fusu would replace him if he took power. Hu Hai however could be coddled and manipulated by the chancellor and prime minister. Li Siu was successful and had Fusu eliminated and Hu Hai installed as emperor.

Hu Hai is said to have been a weak ruler, and slowly the government's hold on the people began to loosen. Hu Hai, like his father, was cruel, and would often order the death of messengers that brought bad news. His legacy became the origin of the saying ''don't kill the messenger.'' Hu Hai ruled from 210 BCE to 207 BCE when peasants rebelled and successfully overthrew the dynasty.

Overall, the Qin Dynasty was the first Imperial China that followed the Warring States period and previous dynasties of Ancient China and lasted only a short period from 221 BCE to 207 BCE. Ying Zheng was the first Emperor of Imperial China who is formally called Qin Shi Huangdi or the '' First Qin Emperor.'' Qin Shi Huangdi made many changes to China such as standardizing military equipment like chariots to ensure that his army had the best equipment, building highways from the capital, issuing coinage, and establishing a government based on legalism. Qin Shi Huangdi's legalism influenced his reign through an interpretation of absolute power and the conformity of all individuals to his decrees and wishes.

After Qin Shi Huangdi died in 210 BCE, his prime minister Li Siu tried to cover up the death because he knew his son Fusu, the heir, may replace him once in power. So, Li Siu had his weaker son, Hu Hai written into Qin Shi Huangdi's will. Hu Hai took the throne, but the peasants rebelled and overthrew the Qin dynasty in 207 BCE.

Why did the Qin dynasty build the Great Wall?

Qin Shi Huangdi's tyranny is critiqued by historians as coming from some egoism or delusions of grandeur. As well, the wall was built to defend the Qin Dynasty territory from northern invaders.

How did legalism influence the Qin dynasty?

The legalism philosophy influenced Qin Shi Huangdi's rule by creating slave-like conditions for many of the commoners under his rule. All social classes were reduced and suppressed. The free speech was suppressed, and all sorts of books were ordered to be burned. Scholars could face execution if they were caught hiding forbidden books.

Unification of Northern China under Shi Huangdi of the Qin Dynasty

History of the Persian Empire