What Is a Radian?

A radian is a unit of measurement of an angle that can be defined as the measure of an angle that subtends an arc with a length of exactly one radius. This definition will be explained in more detail below.

What do these terms have to do with measuring an angle? Imagine in that same circle if the radius {eq}\overline{AB} {/eq} is taken and laid it along the circle.

The corresponding angle has a measure of exactly one radian, regardless of the radius of the circle.

Measuring angles in radians can be helpful in finding arc lengths of a circle. The formula for arc length is {eq}l=r\theta {/eq} where l is the arc length, r is the radius of the circle, and {eq}\theta {/eq} is the angle subtended by the arc. 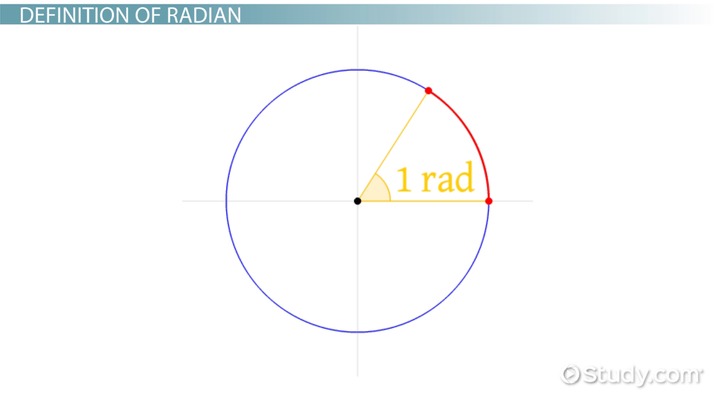 Coming up next: Radians and Degrees: Definition & Examples

How to Find the Radian Measure from a Degree Measure

The following examples will go through using the radian measure formula and converting between radians and degrees.

Example 1: Application of the Radian Equation

In this example, the angle and arc length are given. This time, the radian measure formula can be used to calculate the radius of the circle. Again, the radian measure formula {eq}l=r\theta {/eq} can be rearranged to {eq}r=\frac{l}{\theta} {/eq}. The arc length is {eq}l=5 {/eq} and the angle subtending the arc has a measure of 2 radians. Plugging into the formula gives {eq}r=\frac{5}{2}=2.5 {/eq}. Therefore, the radius of the circle is 2.5 units.

Example 3: What is the Radian Measure of 89 Degrees?

Advantages of Using Radian Measure of an Angle

A natural question that often arises upon learning about radians is why? Why would a mathematician use radians rather than the more familiar degrees?

Both radians and degrees have their place in math, as well as engineering, physics, chemistry, and more. Despite degrees being a more common form of measurement, radians are arguably much more intuitive. Pi is a fundamental mathematical concept, and it is fitting that a straight line has a measure of {eq}\pi {/eq} radians and that there are {eq}2\pi {/eq} radians in a circle. In fact, measuring angles in radians is where formulas like the circumference of a circle ({eq}2\pi r {/eq}) are derived from.

Aside from being intuitive, radians also make certain kinds of math simpler and more precise. As described above, radians are useful because the radian measure formula can only be used with angles measured in radians. Radians also make much of calculus easier, such as deriving trigonometric functions.

How many radians are in a circle?

There are 2π radians in a circle. Since one radian subtends an arc with a length of r, the circle's radius, this means that the circumference of the circle is 2πr.

What exactly is a radian?

A radian is an angle that subtends an arc of exactly one radius. One radian is equivalent to about 57.3°.

The Ambiguous Case of the Law of Sines

Foci and the Definitions of Ellipses and Hyperbolas