Copyright
Maria Airth, Jennifer Beddoe
Learn about the definition of the radicand and its uses in math. Understand what a radicand symbol is. See radicand examples and know, how to solve them. Updated: 01/07/2022

What is a radicand? A radicand is the object of a radical. This radicand definition might have multiple meanings because it is possible to find radicals in social sciences, math, and in political sciences. That leads directly to the next question, 'What is a radicand in math?' The radicand, in a mathematical expression, is the number found under a radical symbol.

In math, a radical symbol is used to indicate that the goal of the problem is to find the root of a number (the radicand). It is the opposite of raising numbers to a power. For example:

What Is a Radicand Symbol in Math?

The radicand symbol is commonly referred to as the radical symbol and it looks like a long division symbol with a checkmark on the front.

Here are a few examples of radical expressions and their meanings:

As you can see, the small number written high and to the left (just over the bend in the symbol) is the index and indicates what root is being sought and the radicand is the large number written under the symbol.

History of Radicand Concept in Math

The word radicand came from the Latin word 'radix', meaning 'root' or coming from. Radix referred to roots of words as well as mathematical roots. The imagery of roots growing a tree helps to show how radicands are larger numbers grown from smaller number roots. The first usage of the word radicand in the English language was in the late 1800s, however, the current symbol for radical expressions was first developed by Rene Descartes in the 1600s. Descartes expanded on the 1500s version of a symbol being used by Christoff Rudolff to indicate taking the square root of a number. It is commonly assumed that the symbol was a form of the letter 'r' to indicate that its purpose is to find the roots of numbers (imagine today's radical symbol without the line going over the radicand).

Radicand vs Exponent vs Index

It is easy to get confused when faced with many new terms. When working with radical expressions, there are three terms that come up frequently: radicand, exponent, and index. These are interrelated but are very different from each other. To understand the difference between these terms, refer back to the diagram of a radical expression:

Radicand
The number under the radical symbol from which the root is being found. It is being broken into a smaller number, which when multiplied by itself the given number of times (given by the index) will result in the original radicand (large number) again. In the diagram, the radicand is number 3.

Index
The index is the root, remember that the word radicand comes from the Latin word 'radix', meaning root. The index indicates what root to take. The most common roots are square roots (numbers that when multiplied by themselves result in the radicand) and cube roots (numbers that when multiplied by themselves three times result in the radicand). The index in the above diagram is number 1.

Exponent
Exponents are small numbers written to the top right of a number to indicate how many times a number should be multiplied by itself to reach the desired result. Exponents are the opposite of an index in a radical problem because an exponent leads to a larger number (multiplying the base by itself to reach a product) while the index in a radical seeks a smaller number than the radicand (the root from which the radicand grew).

It is easiest to understand how these terms differ when seeing them work in a problem. 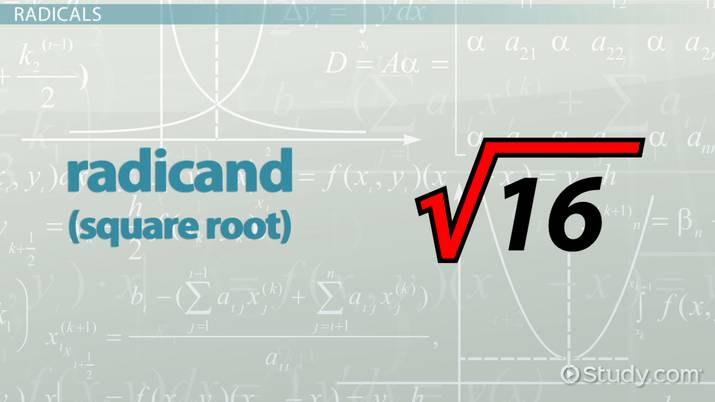 Coming up next: What is a Quadratic Equation? - Definition & Examples

This is a check of the first problem calculated by working backward from the root. The exponent {eq}3 {/eq} indicates that the root, {eq}2 {/eq}, should be multiplied by itself three times to reach the original radicand {eq}8 {/eq}.

To get a better understanding of the concepts presented, work these radicand example problems.

Step 1
Note that the mathematical expression is {eq}\sqrt{121} {/eq}. (Notice that when taking the square root of a number it is not required to use an index of {eq}2 {/eq}. It is understood that a blank index on a radical symbol indicates square root.)

Step 1
The problem was given in mathematical presentation.

Radicands are used frequently in real life. Builders, landscapers, painters, and other construction-type careers require a working knowledge of radicands and radical expressions. Here is an example of radicands being used in a real-life situation.

Step 1
It is best to visualize this problem mathematically with a diagram.

The garden will be a triangle set in the corner of a garden. {eq}a, b {/eq} represent the sides along the existing fence line and {eq}c {/eq} represents the unknown side of the triangle. The Pythagorean Theorem allows Don to express the variables, known and unknown, in a radical expression.

Step 2
Use information from the question to fill in the variables in the problem.

Final answer
The third side of Don's garden would be {eq}15 {/eq} feet long.

The radicand is the number under the radical symbol (the symbol that looks like a long division symbol with a checkmark at the front). A radicand is the large number from which a root is taken. Roots indicate a small number that can be multiplied by itself a number of times (raised to an exponent) to reach the radicand value. The index of a radical expression is the small number set in the space of the checkmark of the radical symbol that indicates the root size desired.

How do I identify the radicand?

What is the example of radicand in math?

Radical math problems deal with finding roots of numbers (a root is a number that can be multiplied by itself to get an original number). The radicand is the original number for which a root is being sought. For example:

What is a radicand?

Cube Root Overview & Examples | What is a Cube Root in Math?

Opposite Numbers | What Is the Opposite of a Number?

Conjugate Math Examples & Rule | How to Find the Conjugate

Complement of a Set: Overview & Examples | What is a Complement in Math?

What is a Solvent? | Solvent Examples & Types

Classical Era Art & Music | When Was the Classical Period?