What is Radioactive Decay? 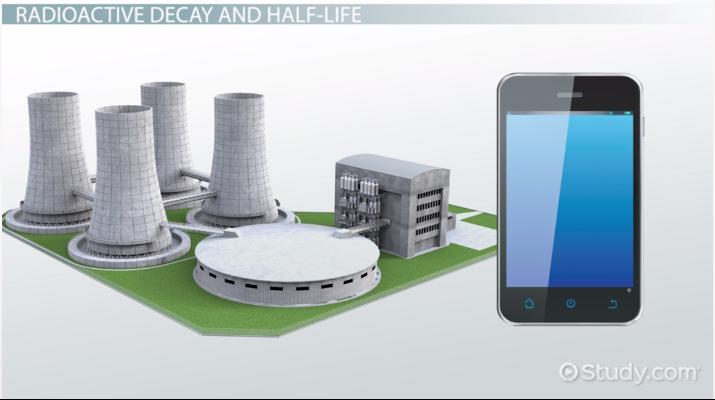 Coming up next: What Are Radioactive Substances? - Examples & Uses

The famous physicists Marie Curie and Ernest Rutherford, among many others, discovered that radioactive decay results in positive and negative particles and neutral rays. Due to the different penetration characteristics, the three results were given the names alpha decay, beta decay, and gamma decay. So, when an unstable nuclide starts emitting radioactive materials, it is called the parent nucleus, and the result new nuclide is called the daughter nucleus. Every nuclide can be represented as {eq}_{Z}^{A}\textrm{X} {/eq} where the symbol of any nuclide replaces X, A is the atomic mass, and Z is the number of protons. Keep in mind that A=Z+N, where N is the number of neutrons.

The helium nucleus {eq}_{2}^{4}\textrm{He} {/eq} is called an alpha particle which is made of two protons and two neutrons. In alpha decay or alpha emission, the unstable parent nuclide emits an alpha particle.

An example of alpha emission is the radioactive Radium nuclide Ra-226 turning to Radon Rn-222 by emitting an alpha particle:

An example of beta-minus decay or emission is the radioactive Cobalt nuclide Co-40 turning to Nickle Ni-40 by emitting an electron:

An example of beta-plus decay or emission is the radioactive Carbon nuclide C-11 turning to Boron B-11 by emitting a positron:

So, in beta-plus or positron decay, the atomic mass number A stays the same, and the atomic number Z is decreased by 1. The daughter nucleus in positron decay has a smaller mass than the parent nucleus.

Recall that a photon is a sack or bundle of energy with no mass and no charge, which makes up electromagnetic waves. For example, light is believed to be dual-natured, one of which is looked at as photon waves. Gamma rays are another name for photons. In gamma {eq}\gamma {/eq} emission or decay energy is released as gamma-ray photons or electromagnetic waves when an excited nuclide moves to a more stable or less excited state. In general, other decays involve releasing energy or emitting gamma rays.

An example of gamma decay or emission is the excited radioactive Protactinium nuclide Pa-234 turning to less excited Protactinium Pa-234 by emitting a gamma-ray photon:

Notice that star (*) refers to the excited state. Also, both parent and daughter nuclei are the same element since gamma rays have no atomic mass or atomic number.

The radioactive decay formula is given by:

where N(t) is the number of remaining nuclei at time t measured in seconds (S), N(0) is the initial number of nuclei at time t=0, and {eq}\lambda {/eq} is the decay constant that differs for different nuclides and is measured by 1/seconds or 1/S (S^{-1})

To know how to calculate radioactive decay, use the known values of the initial amount to nuclei at t=0 and the decay constant of the unstable element, then at any time t by substituting all values in the formula, one can find out how many of the element's nuclei are left N(t).

In particle physics, lifetime is the life of an unstable particle or nucleus while it is still active. In general, lifetime is referred to as {eq}T_{mean} {/eq} which is equal to {eq}\frac {1}{ \lambda} {/eq} or the reciprocal of the decay constant.

{eq}T_{1/2} {/eq} is called the half-life decaying time it took the decaying radioactive material to lose half its initial mass.

So, half-life radioactive decay formula is given by:

Dating the archaeological and geological specimens are radioactive decay examples. To know the age of a specimen, the unstable isotope Carbon fourteen {eq}_{}^{14}\textrm{C} {/eq} is widely used.

1- What is the carbon-14 decay constant?

The half-life of Cobalt-60 is approximately 5.7 years. How much is left of 20 mg of cobalt-60 is left after ten years?

Recall that in gamma emission, energy is released when radioactive material is in an excited state. So, an example of gamma decay equation is:

where the star refers to an excited state of the radioactive nuclide.

where {eq}_{0}^{0}\textrm{ \gamma} {/eq} is the gamma rays that have no atomic mass and no atomic number but are bundles of photons or energy. In general, gamma rays are written as {eq}\gamma {/eq}.

Radioactive decay is defined as the particles or electromagnetic waves emitted once an unstable nuclide move to a less excited or more stable state. There are three well-known radioactive decays: alpha decay, beta decay, and gamma decay. In both alpha and beta decay, the daughter nucleus is different from the parent nucleus. However, in gamma-ray decay, both parent and daughter nuclei are the same element, but the parent is in a more excited state. When a radioactive material starts decaying, its mass is reduced exponentially and can be calculated by the formula of radioactive decay: {eq}N(t)=N(0)*e^{-\lambda *t} {/eq} where {eq}\lambda {/eq} is the decay constant. The mean lifetime is how long an unstable nuclide stays radioactive. Lifetime is calculated by the formula: {eq}T_{mean}=\frac {1}{ \lambda} {/eq}. Half-life is the time that an initial amount of radioactive material takes to reduce it half as much and is given by the formula: {eq}T_{1/2}=\frac {0.693}{\lambda} {/eq}.

What does radioactive decay mean?

What is the formula for calculating half-life?

Half-life is the time it takes an initial amount of radioactive material to be reduced to its half. The half-life formula is given as:

where \lambda is the decay constant

Carbon Importance in Organic Chemistry Compounds | Is Carbon a Compound?