Copyright
Amanda Ferguson, Amy Troolin
Who is Raphael? How did he die? Read about Raphael's early life, education, and career. See a list of his famous works of art, and learn about his significance. Updated: 10/25/2021

Raphael Sanzio was an esteemed Italian High-Renaissance artist specializing in painting and architecture. He was simply known as "Raphael," and lived from 1483-1520 C.E. Raphael gained quite a reputation for his classist-style Renaissance works throughout modern-day Italy and the Vatican. He is best remembered for his multiple "Madonna" painting depictions, as well as his work within Vatican City. Raphael is known as one of the prime trios or "trio of masters" of Renaissance art, which is also thought to include Leonardo da Vinci and Michelangelo. Both aforementioned artists influenced him, and he himself influenced many during and after his life. 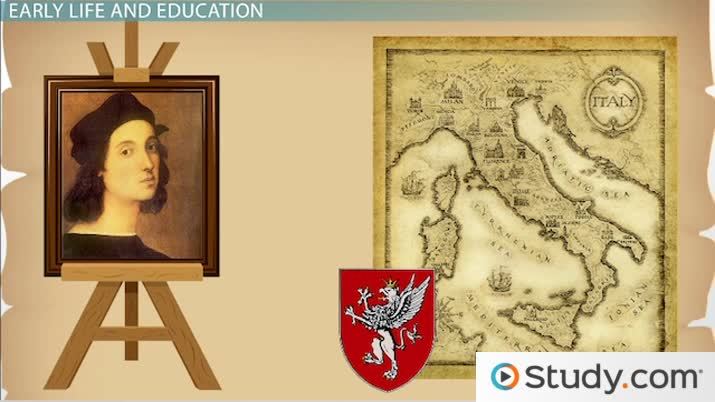 Coming up next: The Catholic Church Before the Reformation: Beliefs and Practices

Raphael was born on April 6, 1483, in Urbino, Italy, during the High Renaissance period. Urbino was considered a cultural hub and encourager of the arts at the time. The Renaissance, or "rebirth" of classical humanist art, philosophy, science, literature, and more, dominated Italy (and spread throughout Europe) from the 14th-16th centuries C.E. And, the term "High-Renaissance" refers to the mid-point and height of the Renaissance period or era. Also, it represents the most exceptional period for the production of Renaissance art. Thus, Raphael, da Vinci, and Michelangelo are all considered High-Renaissance artists.

Young Raphael learned Renaissance-style humanism from an early age due to his upbringing as an artist's son. He went on to live in multiple Italian cities, completing wondrous commissions for well-known patrons. As a result, Raphael gained quite a reputation at a relatively young age and became a sought-after artist during his lifetime.

By 1514, he was engaged to Maria Bibbiena, Cardinal Bernardo Dovizi Bibbiena's niece, via some arrangement. However, Maria died in 1520 due to unknown circumstances, and Raphael was known to have been in love with a baker's daughter — Margherita Luti. Luti was believed to have been Raphael's mistress and model, and many thought she was the great love of his lifetime. Historical records indicate rumors that the two were actually married in secret, but this remains unconfirmed. However, in Raphael's will, he asked to be buried next to Maria.

Raphael died at the young age of 37, but he is remembered as one of the best and most influential Renaissance artists. His art can still be viewed today throughout various locations in Italy and museums throughout the world.

Raphael was born to a relatively wealthy merchant family in Urbino. His father was Giovanni Santi/Giovanni Santi di Pietro, an artist and painter for the Duke of Urbino; he headed a well-known studio and workshop in the city. Giovanni taught the young Raphael basic painting techniques and influenced him in the ways and ideas of humanist philosophy by taking him to the Court of Urbino. Raphael's mother, Magia di Battista di Nicola Ciarla, died when he was only 8 or 9 years old, and then his father died when he was 11. After his father's death, Raphael's uncle, Giovanni's brother, helped raise him. Both Raphael's uncle and stepmother, Bernardina, helped him manage his father's workshop. He developed notable talent very quickly while still in Urbino and was even believed to have surpassed his father's skill.

As a teenager, Raphael received an invitation from artist Pietro Vannunci, also known as Perugino, to work as his assistant in Perugia (Umbria region in central Italy). While in Perugia, Raphael practiced techniques of High Renaissance art and worked under Perugino for about four years. During this time, he received his first commissions and painted many frescoes, including work at the Collegio del Cambia, honing in on his own unique style and gaining greater recognition.

Raphael was truly a product of the High Renaissance due to his education, experiences, and influences. As previously mentioned, the young Raphael was sometimes taken to the Court of Urbino, where he was educated in the ways of humanist philosophy. After his father's death, he is said to have received some training from Urbino court painter Timoteo Viti. Raphael also learned and was inspired by many Renaissance artists, including Perugino, Leonardo da Vinci, Fra Bartolommeo, Michelangelo, and Masaccio. The aforementioned artists helped Raphael learn how to include greater depth, detail, style, expression, and more in his works. His works are said to bear a very close stylistic resemblance, especially retaining the clear, bright light quality, to his early master Perugino.

Due to his ability to paint harmonious figures with ease and clarity, Raphael distinguished himself as an artist and grew to know much success. According to Giorgio Vasari, who was also an artist and historian of the time, Raphael became a full-on master painter by 1500. Much of what is known about Raphael comes from the writings and accounts of Vasari.

Raphael's late-career included the great works of art and architectural design he contributed to Rome and the Vatican. First invited by Pope Julius II, Raphael was asked to commission fresco paintings in the pope's private library. This work would lead to many others within the Vatican and throughout Rome. Michelangelo began his work on the Sistine Chapel ceiling at the same time that Raphael worked on the pope's rooms. The two artists are depicted as somewhat of enemies, evident in Michelangelo's and Vasari's writings. However, it is said that Raphael was influenced a great deal by Michelangelo.

In 1514, following the death of Vatican architect Bramante, Raphael was appointed as architect of the new St. Peter's Basilica at the Vatican. A good deal of Raphael's work there ended up being destroyed or changed, as he died only a few years after this appointment. Michelangelo's, as well as others', designs would be used on the project instead. Outlines and drawings of Raphael's ideas still remain. However, Raphael did design and complete work on several other key buildings for the papacy before his death. He was regarded as the most important and influential architect of Rome at the time.

Before his death, Raphael received multiple esteemed titles for his work with the Roman Catholic Church. In 1517, Pope Leo X made Raphael the Commissioner of Antiquities in Rome. This title allowed Raphael to oversee the restoration efforts of Rome's beloved antiquities; he drew an archaeological map of Rome for this task, which is regarded as an important piece of architectural work.

In addition, Raphael was named "Groom of the Chamber" from the Papal Court for his work on the pope's chambers and private rooms. He was also appointed "Knight of the Papal Order of the Golden Spur" for his overall contributions to the Catholic Church. Transfiguration, an oil painting intended as an altarpiece, was Raphael's last work. The aforementioned painting was one of the most famous Renaissance-style works for many years.

How Did Raphael Die?

Raphael died from a mysterious circumstance/illness on his 37th birthday on April 6, 1520. The illness lasted for about 15 days before his death, and it was quite sudden. His funerary proceeding in Rome was rather large, as many people mourned his death and attended his funeral. Raphael was finally laid to rest within Rome's Pantheon and gained even greater fame after his death.

The artist Raphael created various types of artwork throughout his lifetime and is most known for his paintings and architectural designs. His style was that of Renaissance humanist, ending with a more mannerist and Baroque style around the time of his death. He was thought to have been the leading figure of Renaissance classism, the artistic style of classical ideas and figures in natural interaction with one another.

Some of Raphael's most famous paintings include:

Architecture was a venture of Raphael's in the later portion of his life. His first commission involving architecture was the design and decor for the Chigi Chapel in the Church of Santa Maria del Popolo in 1513.

Overall, Raphael had quite an influence over the High Renaissance period regarding art and architecture. He was known for his incredible clarity of form and light, as well as his realistic features. Raphael influenced many later artists and even helped usher in the Baroque period with his later works. By the time of his death, Raphael had amassed a large workshop with about 50 apprentices. Some of his apprentices went on to become successful artists in their own right.

Raphael Sanzio, simply known as "Raphael," was a very successful painter and architect of the High-Renaissance period in Italy. He lived from 1483-1520 C.E. and is remembered as one of the trio of masters of Renaissance art, along with da Vinci and Michelangelo. Raphael learned painting techniques from his father at a young age and then served as an apprentice and assistant to artist Perugino.

Raphael worked in the Umbria region of Italy, followed by Florence, and then finally Rome and the Vatican. Much of his work included altarpieces, including various depictions of the Madonna, portraits, and Christian-related scenes. The first room Raphael worked on at the Vatican was the Stanza della Segnatura, which included the famous masterpiece School of Athens. He was later appointed Chief Architect of the Vatican in 1514 by Pope Leo X, which truly kicked off his later years as an esteemed architect throughout Rome. Raphael's last painting was Transfiguration, which was unfinished due to his death in 1520.

Where are Raphael's most famous paintings?

Raphael's works of art can be found in various museums throughout the world. However, his most famous works can be viewed at the Vatican.

What did Raphael contribute to the Renaissance?

Raphael contributed many high-quality works of art, including painting and architectural designs, to the Renaissance. He used Renaissance ideals within his art, furthering the movement in Italy and beyond.

What was Raphael's style of painting?

Raphael's style of painting was very much a product of the High-Renaissance period. His style included the use of classist, humanist, and realist themes. Raphael used bright light in his works and was thought to have painted with great clarity and detail.

The School of Athens by Raphael | Description, Figures & Analysis