What is a Rational Exponent?

Here are some examples of rational numbers:

What is a rational exponent? A rational exponent occurs when a base number is being raised to a fractional (or rational) power. To better understand the rational definition of exponents and prepare for this lesson, review these keywords associated with these two numbers:

Understanding the parts of problems using rational exponents is the first step to solving them. 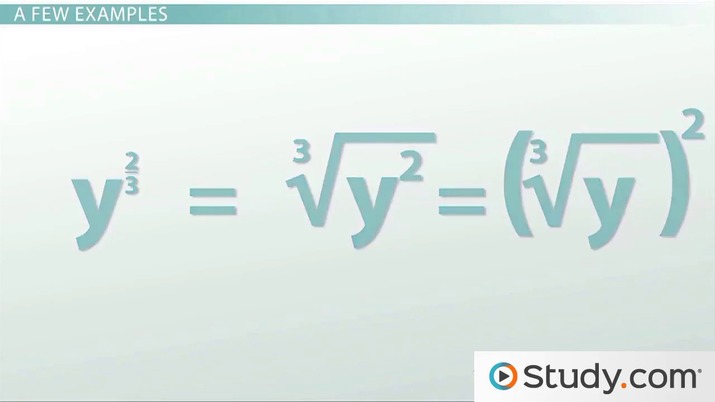 Coming up next: Simplifying Expressions with Rational Exponents

The best way to understand how to do something is to work through it. Try these rational exponent equations.

Step 1
Identify the 1 as the new exponent.

Step 2
Identify the base as the radicand, 5.

Step 3
Identify the index number as 2.

Step 4
An exponent of 1 is already as simple as possible and does not need to be explicitly written.

Step 5
The square root of 5 is not an integer nor a rational number, thus it can be left as a radical or changed to a decimal rounded to any place value desired.

Following steps 1 through 3, rewrite the number with the numerator, 4, as the exponent of the radicand/base, 2, using an index of 3 on the radical.

Step 5
Simplify the radical: 16 is not a perfect cube, however {eq}m^4 {/eq} can be simplified in this instance.

Step 1
Start inside the parenthesis and identify that the exponent for the radicand is 1.

Step 2
Identify that the index is 5.

Step 3
Rewrite the radical expression as the rational exponent expression of {eq}x^{\frac{1}{5}} {/eq}.

Step 2
Identify the exponent of the radicand as the numerator needed for the rational exponent in the final answer, 3.

Step 3
Identify the index of the radical as the denominator needed for the rational exponent in the final answer, 4.

Step 4
Rewrite the radical number as a rational exponent expression keeping the expression in the denominator of the original fraction.

Step 5
Using knowledge of positive and negative exponents, it is possible to rewrite this as {eq}x^{\frac{-3}{4}} {/eq}.

A small box will appear superscripted to the right of the 5 entered in step 1.

There are a few mistakes that are common when working with rational exponents.

The most common mistakes occur with negative rational exponents. Remember that a negative exponent is made positive by rewriting the number as its inverse. The exponent stays the same but changes from negative to positive.

Notice that the rational exponent 3/4 goes from negative to positive when the expression is written in inverse.

The reverse is true as well.

Another common error is forgetting that the basic radical sign is a square root, thus has a standard index of 2, and that all base numbers have a standard exponent of 1 if no exponent is showing.

What are examples of rational exponents?

Rational exponents are exponents written in the form of a fraction. For example:

These fractional exponents are manipulated into radical expressions when solving.

What is a rational exponent fraction?

Why are rational exponents called rational?

Multiplying Exponents | How to Multiply Numbers With Exponents

What are Polynomials, Binomials, and Quadratics?

How to Define a Zero and Negative Exponent

Exponent Base & Type | What is a Positive Exponent?

Multiplying Exponents | How to Multiply Exponents With Different Bases

What is a System of Equations?

How to Add, Subtract and Multiply Complex Numbers

How to Find Slope with 2 Points Formula