Copyright
Katie Mantooth, Lisa Roundy
Learn all about rational emotive therapy (REBT), its techniques and see the differences between REBT and CBT. Also, learn about the ABC model. Updated: 11/28/2021

What is Rational Emotive Behavior Therapy?

Rational Emotive Behavior Therapy, or REBT, is a clinical therapy type used to treat irrational thought patterns which lead to emotional or behavioral issues. This type of therapy helps to target a specific thought or pattern of thinking, examine the consequences or outcomes, and replace those thoughts or patterns with rational thinking to change the consequences. REBT relies on the idea that people generally want to find happiness and reach their goals, but are sometimes hindered by negative thoughts. Since our thoughts influence both our actions and worldviews, REBT, sometimes called Ellis REBT after it's creator, Albert Ellis, targets these thoughts and focuses on how to best bring back a positive mindset. Using an "ABC" model, the goal of REBT is to take "toxic" negative mindsets and maladaptive behaviors and turn them into rational, realistic mindsets that will allow the patient to achieve their goals.

Rational Emotive Behavior Therapy and Cognitive Behavioral Therapy, or CBT, are both therapies used to address negative thought patterns, and it is important to note that both therapies believe that emotions and behaviors stem from these negative thought patterns, ideas and attitudes and NOT specific or general events. However, they also differ in some major key ways: 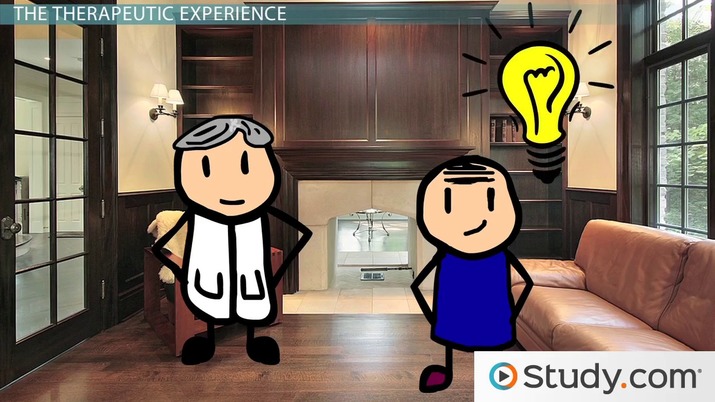 Try it now
Back
Coming up next: Reality Therapy: Techniques, Goals & Limitations

In 1957, an American psychologist named Albert Ellis penned and published perhaps his most influential piece entitled "Rational Psychotherapy and Individual Psychology" where he outlined a new type of therapy he referred to as "Rational Therapy." While his idea to change negative thought patterns in order to change negative moods and behaviors is not a new concept, he was the first to pen and outline a scientifically-testable paradigm. This earned Ellis the honor of now being referenced as one of the founders of the "cognitive revolution" within clinical psychology.

After receiving feedback that the title of his budding therapy seemed to ignore emotions (largely because of his use of rational in the name), he renamed his therapy Rational Emotive Therapy in 1961, and a year later, released his seminal novel Reason and Emotion in Psychotherapy. Even still, the name was misleading practitioners to be "too cognitive" and largely ignore behavioral factors, so once again, in 2005, he renamed the therapy "Rational Emotive Behavior Therapy" to avoid confusion. Before his death, he had even expressed a desire to change it a third time to "Cognitive Affective Behavior Therapy" but never got the chance to do so, as he passed in 2007.

Today, through the work of the Albert Ellis Institution, REBT is still being used alongside CBT and other forms of therapy.

So how does REBT actually work? Generally accepted as an effective type of therapy, REBT uses an ABC model to treat negative symptoms and moods. Refer to the chart below for a breakdown of this simple acronym.

The other interesting aspect of REBT technique is that it does not require a warm, comfortable relationship between a patient and therapist, as practitioners of REBT believe that too much empathy could clog communication.

Rational Emotive Behavior Therapy can be used to treat or alleviate the following:

Despite being accepted as an effective form of therapy all over the world, there are still some strong criticisms against Rational Emotive Behavior Therapy. To start, some find REBT's treatment guidelines to be too rigid and stoic, not allowing for evolution from situation to situation. This lack of flexibility can mean that the therapy is not accessible to all prospective patients. Another major criticism is that it allows for a dissolution of guilt from those who may have hurt the patient through its ideology of "no one can hurt you; you can only hurt yourself through negative thoughts and behavior." While this sounds good in theory, people may still need to be held accountable if they harm others. The other major criticism is that REBT does not allow a patient to fully open up to a therapist, as it tends to create a cold, uninviting environment.

Founded in 1957 by Albert Ellis, Rational Emotive Behavior Therapy is a type of therapy that focuses on correcting negative thought patterns and beliefs in order to correct destructive moods and behaviors. It's most often used to treat depression but can also be used to treat anxiety, disordered eating, anger, aggression, addictions and sleep problems. While similar to Cognitive Behavior Therapy, it mainly differs in the nature of the relationship between patient and therapist, how it addresses self-esteem (CBT focuses on positive qualities while REBT relies on unconditional self-appreciation), and their relationships with anger. This type of therapy has evolved to its current state through many changes over time, most of them enacted by Ellis himself. At its core, it has remained the same through the belief that we can control our thoughts and, therefore, our mood and that we are all want the most and best out of life. Of course, REBT has garnered a few criticisms over the years. For instance, it allows for the dissolution of guilt through the idea that "we are the only one who can hurt ourselves," which is a belief often perpetuated within the therapy. In the end, Rational Emotive Behavior Therapy is a widely accepted form of therapy and has millions of success stories.

What is the difference between REBT and CBT?

REBT is similar to CBT, but it differs in a few key ways. First, REBT therapists tend to be colder and less emotional than CBT therapists, and while CBT therapists view all forms of anger as negative, REBT recognizes that some anger is beneficial. Lastly, REBT employs an unconditional self-acceptance system while CBT tends to build self-esteem by focusing on positive attributes of a patient.

What is REBT and how does it work?

REBT is a type of behavior therapy that focuses on correcting negative thought patterns and cognition in order to correct destructive or negative behaviors or moods. It's most often used to treat depression but can also be used to treat anxiety, disordered eating, anger, aggression, addictions and sleep problems.

What is the main goal of rational emotive behavior therapy?

The main goal of REBT is to correct negative cognitions or mindsets so that a patient can live a fulfilling life and achieve their goals.

Rational Emotive Therapy Overview & Techniques | What Is REBT Used For?

Religious and Spiritual Development in Counseling

Education and Competencies of a Professional Counselor

Rational Emotive Therapy Overview & Techniques | What Is REBT Used For?

Religious and Spiritual Development in Counseling

Education and Competencies of a Professional Counselor