Theresa Bird, Matthew Hill
Explore Edmund Burke's "Reflections on the Revolution in France." Learn about the author, study the summary and analysis, and review the impact of Burke's work. Updated: 08/12/2022

Reflections on the Revolution in France

Burke wrote Reflections on the Revolution in France with the fear that England might follow the same path to revolution as France. Perhaps one key mitigating factor is that this publication was originally written as a letter to a family friend of Burke's who happened to be French. Charles-Jean Francois Depont had asked Burke for his opinion on the French Revolution, and the Reflections document was the response he gave. Perhaps this is partly why this dissertation on the subject was later perceived as somewhat lightweight and devoid of strong facts and arguments. Nevertheless, his work created many obstacles in his political career and lowered his popularity. 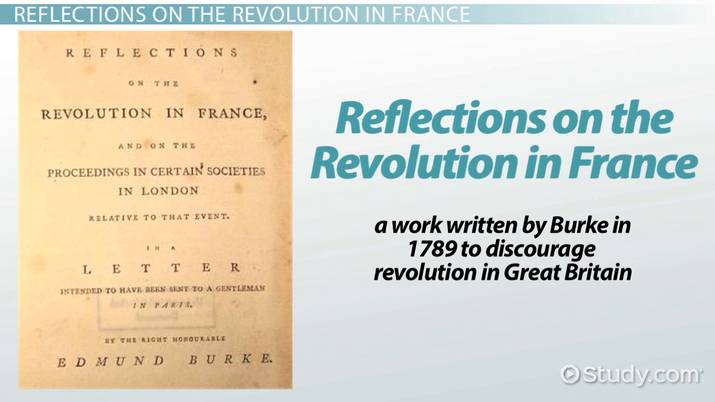 Try it now
Back
Coming up next: The Class System in the French Revolution

Edmund Burke's Reflections on the Revolution in France: Summary

Burke was one for tradition and structure and did not appreciate or support the dissolution of the state, culture, and religion that was taking place in France. He saw the French Revolution as an attack on ancient customs and traditions that could not be instantly torn down without the country resorting to anarchy and dictatorship. Burke also mocked the French Revolution as "most absurd and ridiculous" and viewed the revolution as a "strange chaos of levity and ferocity".

The emphasis on conservative and traditional hierarchical structures could also explain why Burke viewed the American Revolution favorably since, apart from the loss of colonies by King George, there was no long-established and entrenched royalty, aristocracy, or church fundamentally destroyed. What appears to have unnerved Burke the most was the seemingly widespread support amongst some segments of the British people. He seemed to hope that his writings would provide his fellow citizens with a counter-argument that would bring them back into the fold of the status quo. Burke thought that as much as the change was needed, it should occur incrementally without fundamentally destroying the entire structure of a culture or society.

Edmund Burke's Reflections of the French Revolution has been criticized for its bias Burke appears to be too entrenched in tradition and structure to the point of ignoring the very problems that caused the revolution in France in the first place. Historians regard Burke's arguments as inconsistent with actual history. Conservative historian Alfred Cobban acknowledged that Burke's words "are not merely inadequate, but misleading." Burke appears to have much knowledge of the American revolution in his work but appears to count on weak information for the French Revolution.

Impact of Reflections on the Revolution in France

One particularly poignant rebuttal of Burke comes forth in the writings of American political activist Thomas Paine. His work, Declaration of the Rights of Man (1790), was a response that directly criticized Burke's interpretation of the French Revolution. Specifically, Paine mocked Burke's praise for Marie Antoinette and stated that Burke pities the plumage, but forgets the dying bird. Burke also ruined his friendship with Charles James Fox, a prominent British Whig statesman, over the publication of his book, as Fox supported the French Revolution.

Other impacts of Reflections on the Revolution in France included some of its predictions coming true through the Reign of Terror under the new French Republic from 1793-1794, where thousands were executed, in particular, members of the church. A military dictatorship soon rose from the ashes of revolution under Napoleon Bonaparte in the 1790s, just as Burke had predicted in his work. Burke's work would also come to inspire arguments of conservatism among Western conservatives, particularly in the 20th century.

Edmund Burke felt compelled to write Reflections on the Revolution in France in 1790 primarily as a response to a question from a family friend. The underlying theme seems to be driven to a large extent by his fear that England would follow the same path to revolution as he had observed the French people do, which culminated in the French Revolution of 1789. He voiced his concerns in his writing about the traditions and values of France deteriorating into a dictatorship. This later came true through the military dictatorship of Napoleon Bonaparte overtaking France in the 1790s. Regardless of some of the insightful and farsighted situations that Burke identified correctly, a great deal of criticism was also directed and heaped upon Burke's work. It was most frequently criticized for being out of touch with the reality of the revolution.

Historians later claimed that Burke was more involved with his knowledge of other revolutions but was merely going off general thoughts about the French Revolution. Instead of basing his arguments on actual strong evidence of research, the writing is an informal response to a French friend's inquiry as to Burke's thoughts on the revolution. Criticisms were aimed more at Burke's position as a traditionalist and conservative at a time when the 'ordinary' citizen was disaffected with the status quo and was seeking a great ability for self-determination, which is why they were perceived as 'lightweight' in nature or research.

Try it now
Back
Create an account
Reflections on the Revolution in France by Edmund Burke | Summary & Analysis
Start today. Try it now
AP European History: Help and Review

The Descent of Man by Charles Darwin | Author, Overview & Quotes

What are Assets? | Examples of Assets in Finance

The Subjection of Women by John Stuart Mill | Summary & Analysis