Miranda Schouten, David Juliao
Learn about the features of Italian Renaissance furniture and interior design. Understand the history of the Renaissance era in terms of design and materials. Updated: 04/25/2022

Renaissance history is most frequently described as taking place from the last years of the fourteenth century into the seventeenth century. It is said to have started in Florence, Italy. The French word "renaissance" means "rebirth". It was known as a cultural, political, and artistic rebirth following the Middle Ages, which was a period of cultural decline and inactivity. The Renaissance era promoted the rediscovery of earlier classical philosophy, literature and art as well as the discovery of new lands and cultures in which European commerce could grow and flourish.

The Italian Renaissance focused heavily on the upper class. Wealthy families and organizations commissioned elaborate works of art, including paintings, sculptures and furniture. These works of art often focused on Greek and Roman mythology as well as the depiction of religious themes. Great artists such as Leonardo da Vinci, Michelangelo, and Botticelli were born out of the Italian Renaissance, creating famous works and redefining art.

Around 1450, as Italian art began to be exported from Italy and sent to Northern European countries, the Renaissance moved north. Countries including Germany, France, England, the Netherlands, and Poland all experienced the Northern Renaissance, which was vastly different from the Renaissance taking place in the southern country of Italy. Because the northern countries were centralized on the continent, there was less of a wealthy merchant class commissioning artwork. Instead, the Northern Renaissance artwork focused on peasant life and simple, pious living. 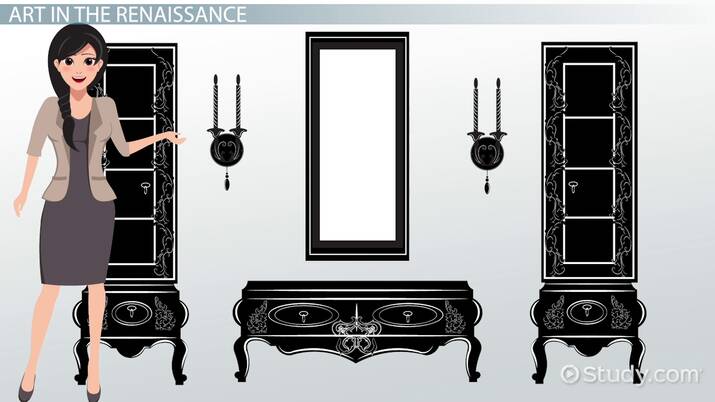 Try it now
Back
Coming up next: Jacobean Era Furniture: History & Characteristics

During the Renaissance Era, Italy began to shift its architectural aim to be more symmetrical, proportioned, spacious, and grand. Meanwhile, interior design during this era also changed, being completely different from that of the Medieval times. Until the Renaissance era, furniture was made in relatively small quantities. Most families only had one set of furniture, and travelers often brought their furniture with them. Because of this, the style of furniture during the Middle Ages was often collapsible in order to be carried easily from place to place. The chest was the most basic type of Medieval furniture, often serving as a cupboard, trunk, seat, and desk when necessary.

The Italian Renaissance brought a rise in wealth that afforded many people the ability to buy lavish furniture, decorating their homes as a way to prove their wealth. Lower-class families still furnished their homes with smaller, simpler furniture than the wealthy upper class including straw beds on the floor and folding chairs. Homes of the noblemen and middle class were often decorated with tapestries, sculptures, and murals depicting Classical themes of religion, history, and mythology. The wealthiest Italian families decorated their palaces with marble sculptures and elaborate paintings. The style of furniture in the Italian Renaissance was palatial and architectural in character rather than domestic. Cabinets were the most important piece of Italian Renaissance furniture, often extravagantly carved and with inlays of ivory, bone, or polished stones. Chairs were either high-backed or of the curule design. They had decoratively carved feet and were upholstered with fine cloth such as leather, silk, or velvet. Tables were often rectangular in shape and supported by a single, intricately carved base. The tops were either marble slabs or thick, wooden planks either with inlays or gold leaf gilding.

Though Italian Renaissance furniture is some of the most well-known, other European countries began to adapt their interior design styles as well.

With trade came vast wealth to Italy during the Italian Renaissance. This brought the rise of the bourgeoisie, which led to larger homes being built and, as a result, more high-quality furniture pieces to fill these homes. Italian Renaissance furniture was considered a symbol of social status due to the high cost of the elaborately constructed furniture pieces. The wealthier someone was, the more high-end furniture they could afford to fill their homes with. Craftsmen from all over Europe traveled to Italy to learn the techniques of the Italian furniture craft.

The Renaissance began a period of cultural appreciation and intense learning influenced by the Classical philosophies of ancient Greece and Rome. With that, Classical design took over furniture design as well. Renaissance furniture had a strong architectural sense that was influenced heavily by Classical designs and architectural lines including columns, pediments, and cornices. For example, cabinets often displayed colonnades, and the fronts of cupboards were designed to appear as miniature basilicas and palaces. Furniture was most often made out of wood, usually walnut, and decorated with carved elements inspired by mythical, historical, and religious concepts. They would have rich, dark tones in order to stand out from light-colored interior walls and frequently included inlays of precious metals and stones. They also included marquetry, pieces of veneer applied in a decorative design or pattern. Glass, fabric, and ceramic pieces would be brightly colored.

Renaissance era furniture was vastly different from the earlier Medieval furniture of the Middle Ages. Italian Renaissance furniture often had an architectural sense influenced by the Classical styles of ancient Greece and Rome, including columns, pediments, and cornices. These furniture pieces were most often made out of walnut with elaborate carvings for ornamentation. The surge of wealth in Italy led to the rise of the bourgeoisie, or middle class, which prompted the production of finely crafted Renaissance furniture. Interior design began to shift during this time period, moving away from practical pieces that were easily broken down for travel, instead focusing on solidly built ornamental furniture meant to decorate the beautiful, grand homes of the wealthy. Furniture was considered a symbol of social status because only the wealthy families could afford the decorative furniture fashioned by the finest craftsmen in Europe.

What was Renaissance furniture made of?

Italian Renaissance furniture was generally made of wood, as the cabinet was one of the most prominent pieces of furniture. Walnut became the most frequently used type of wood due to its suitability for finely-detailed carvings.

What is Renaissance style furniture?

Renaissance style furniture is a style of furniture that was developed early in the Renaissance era. It is often made from walnut, intricately carved and grand in size with Classical details of ancient Greece and Rome.

Italian Renaissance furniture sought to do away with the Medieval Gothic style furniture of the Middle Ages. Instead, they looked to the Classical designs of ancient Greece and Rome for their inspiration, building grand pieces of furniture intricately carved and adorned lavishly with inlays of ivory and stone.

What is Italian Renaissance furniture?

Italian Renaissance furniture is furniture that was crafted in Italy during the Renaissance Era (14th-17th centuries). The furniture was usually made of wood, decoratively carved and inlaid with lavish materials including precious stones, ivory, and gold.