Peter Williams, Sarah Phenix
Understand what renal corpuscles are and see an explanation of how they function. Learn about the location, components, and anatomy of renal corpuscles. Updated: 01/24/2022

What is the Renal Corpuscle?

An average human being has two kidneys which play a vital role in removing excess water, salts, and nitrogen waste from the body. Kidneys are covered by connective tissue capsule, and each kidney has two portions. The outer portion is referred to as the renal cortex, and the inner portion is the renal medulla. The functional unit of a kidney is referred to as the nephron, which is a coiled tubule made of a single cell layer. Each nephron includes the renal corpuscle, proximal convoluted tubule, the loop of Henle, distal convoluted tubule, and collecting duct. Each kidney may contain up to 1 to 4 million nephrons. 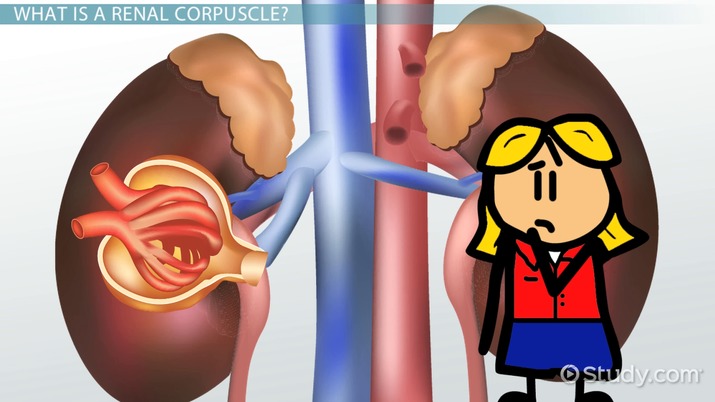 Glomerulus and the Bowman's capsule are the main components of the renal corpuscle, though the mesangium is also a part.

The Bowman's capsule is formed during embryonic development. It results from the pression of the glomerular capillaries against the closed end of the proximal convoluted tubule. The outer surface of this cup-like structure is made of parietal epithelium cells - flat, scale-like cells, also referred to as squamous epithelium cells. The podocytes form the visceral layer of the Bowman's capsule. These podocytes develop from the thickening of the epithelial cells that are in contact with the glomerular capillaries. There is a space between the visceral and parietal layers known as Bowman's space. This space forms the proximal convoluted tubule's lumen (inside space) from one end. This space also contains the renal filtrate, the fluid that eventually becomes the urine.

In addition, the renal corpuscle has another component known as the mesangium, an arborizing (branch freely and differently) structure comprised of mesangial matrix and mesangial cells. The mesangial cells are located adjacent to the glomerular capillaries, and they possess the ability to contract. Mesangial cells play several vital roles such as:

2. The endothelium of the glomerular capillaries is fenestrated, i.e., it is made up of pores that are 700 angstroms in size. These pores are referred to as fenestrae, and they are selectively permeable. Therefore, they only allow certain materials or substances to pass through them. For instance, water, creatinine, small proteins, and solutes such as sodium ions, urea, and glucose pass through these pores. However, blood cells (red blood cells, white blood cells, platelets) and large proteins cannot go through these pores. This phenomenon is mainly known as size exclusion filtration.

4. The ability of the mesangial cells to contract also regulates the glomerular filtration rate. This can be either through alteration of the glomerular capillaries surface area or blood flow regulation in the capillaries.

The glomerulus is a network of capillaries supplied by the afferent arteriole and emptied by the efferent arteriole. The capillaries of the glomerulus have endothelial cells that are covered by a basement membrane. Podocytes surround the basement membrane. The basement membrane, attachment apparatus of podocytes (also known as podocytes foot processes), and the capillaries endothelium form the filtration barrier. Bowman's capsule is a cup-shaped structure that encloses the glomerulus. The renal corpuscle is involved in blood filtration. The endothelium of the glomerular capillaries has pores that are referred to as fenestrae that allows selective filtration. Water, creatinine, small proteins, and solutes such as sodium ions, urea, and glucose pass through these pores. However, red blood cells, white blood cells, platelets, and large proteins cannot go through these pores. This type of filtration is referred to as size exclusion filtration.

What structure is in the renal corpuscle?

What is the renal corpuscle's function?

What is the main function of the glomerular capsule?

The glomerular capsule is also referred to as the Bowman's capsule. It has a space known as the Bowman's space where the renal filtrate collects. This capsule also encloses the glomerulus, which performs the filtration of the blood.

Where do you find the renal corpuscles?

Renal corpuscles are contained in the renal cortex portion of the kidney. A kidney has two portions, the outer portion (renal cortex) and the inner (renal medulla).

Glucagon Overview & Function | What is Glucagon?

Sensory Nerves: Types and Functions of Sensors and Receptors

Blood Supply of the Kidneys