What is the Renal Medulla?

To know what is the renal medulla, recall that the kidneys are the filtering part of the human urinary system where the renal medulla is the tissue that occupies the central and inner parts of the kidney. The medulla kidney contains renal pyramids where waste collection and elimination occur. The medulla urinary system in both kidneys is considered the major filtration part of the renal system.

Every kidney has three main regions: the renal medulla, cortex, and pelvis. The outermost layer of a kidney is the fibrous capsule. The renal cortex occupies the space between the fibrous capsule and the renal medulla, which is found at the center of the kidney. However, the renal pelvis is the part where the kidney connects to nerves and blood vessels. Also, in the renal cortex, an important hormone-Erythropotein- is produced to help create new red blood cells. 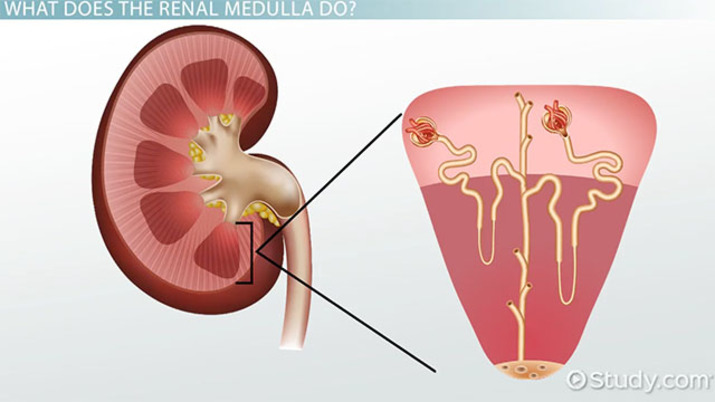 The renal medulla function in both kidneys is to filter liquid waste, retain fluid in case the body is dehydrated, balance electrolytes, and eliminate extra acidity in the bloodstream. The renal medulla process the waste from the bloodstream through many levels of filtration, secretion, reabsorption, and excretion. Different kinds of waste such as urea, ammonia, and creatinine are directed through different channels to be sent to the bladder.

Triangular masses called renal pyramids are found in the renal medulla structure. Inside each renal pyramid, there are networks of nephrons. Nephrons are sensitive to different kinds of molecules in the bloodstream, which allows them to balance ions and water in the body. Both nephrons and renal pyramids will be discussed below.

The renal pyramids are masses that have triangle-like shapes inside the renal medulla. Each renal pyramid contains a large number of tubules called nephrons, or the functional units of the kidneys.

The main renal pyramid function is to collect and transport urine through almost 1.25 million nephrons in the kidneys. The glomerulus is a small network of blood vessels that filter substances from the blood into the nephron. These nephrons consist of a series of tubes that lead to the ureter which carries the urine into the bladder. Nephrons end at the inner tip of the renal pyramid, where the pyramid is at its most thin, which is also known as the kidney papilla. The kidney papilla functions to collect and channel the urine droplets into a renal pelvis extension called the calyx that empties into the ureter.

Kidneys are the major part of the body's urinary system. While kidneys are surrounded by a layer called the fibrous capsule, they are divided into three main sections: the renal cortex, medulla, and pelvis. The kidney's work start when blood arrives at the renal cortex where it undergoes a filtration process and urine is collected. Urine moves through the renal medulla's tubules or nephrons where two more processes take place: reabsorption and secretion. In the final stage, urine moves through the renal pelvis where excretion occurs, and urine ends in the ureter moving toward the bladder.

The renal medulla is the heart of the kidney where it contains about a dozen triangular structures called renal pyramids. Each renal pyramid has more than a million tubules are called nephrons. In their functions, both kidneys ultimately balance electrolytes in the body, retain fluid if the body is dehydrated, and get rid of extra acidity in the bloodstream.

What does the renal medulla contain?

What is the renal medulla in the kidney?

The renal medulla is the tissue that occupies the central and inner parts of the parenchyma in both kidneys. The renal medulla contains renal pyramids where waste collection and elimination occur.

What is the difference between the renal cortex and medulla?

The renal medulla is the kidney's heart and where the urine is ultimately channeled to the bladder. The renal cortex is where the urine is collected by filtration processes. Blood, which carries the body's liquid waste, arrives at the cortex where nephrons' ends exist.

What is the renal medulla divided into?

The renal medulla is the inner part of the kidney's parenchyma where it contains about a dozen triangle-shaped structures called renal pyramids. Each renal pyramid contains more than a million tubules are called nephrons.

What collects urine from a renal pyramid?

Is the renal medulla a tissue?

Transverse Colon Overview & Function | What does Your Colon Do?