The Ring of Fire is a path around the edges of the Pacific Ocean that contains the majority of the Earth's volcanoes. Technically this is not a ring or circular shape, but more of a horseshoe shape. Around 90% of all earthquakes and 75% of all active volcanoes occur in this area. Sometimes this area is called the Circum-Pacific Belt or Pacific Ring of Fire. 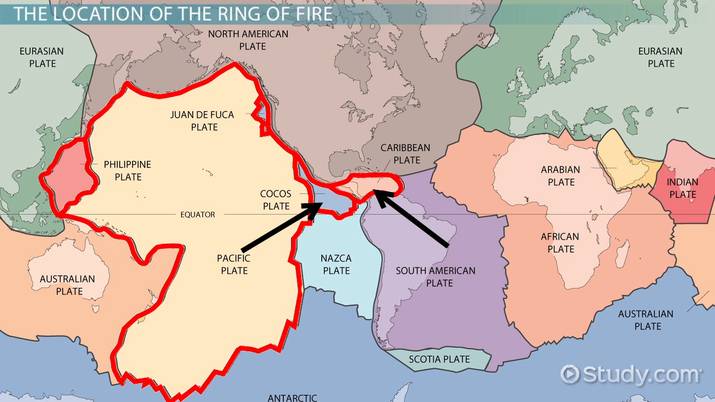 Where is the Ring of Fire Located?

The Ring of Fire is over 25,000 miles (40,000 km) long and runs from New Zealand through Japan, across the Bering Strait, along the west coast of North America, and down to the southern tip of South America. This covers four different continents: Oceania, Asia, North America, and South America. There are many island chains along the ring, including: Tonga, New Hebrides, Indonesian, Philippines, Japan, Kuril, and Aleutians.

The Ring of Fire follows the boundaries of many tectonic plates including the Philippine, North America, Nazca, Indian-Australian, Cocos, Juan de Fuca, and Pacific. These are mostly convergent boundaries where one plate is going under another plate. As the plate moves down, the friction makes the rocks melt and become magma. This large source of magma so close to the surface makes an ideal condition for volcanic activity.

Converging boundaries also create ocean trenches. This happens through the process of subduction. Subduction means the downward and sideways movement of a tectonic plate. The deepest ocean trench is the Mariana Trench which is also a part of the Ring of Fire.

The boundary between the Pacific and North American plates is called a transform boundary, which is when two plates rub against each other. This creates many earthquakes as the tension builds up and is released.

The Ring of Fire touches many countries including:

Map of Ring of Fire

The Ring of Fire is known for earthquakes and more than 450 volcanoes. Some of the world's largest and most dangerous volcanoes are located in the Ring of Fire. These include:

In 2018, a major eruption happened in the Arak Krakatau volcano. This took place mostly underwater and caused larger problems as the side of the volcano collapsed in the eruption and the displaced dirt was pushed into the water. This created enormous ocean waves which lead to a deadly tsunami in Indonesia.

A majority of the earthquakes happen in this area and are known for many powerful and deadly events. These include:

Facts About the Ring of Fire

The Ring of Fire is a path around the Pacific Ocean that includes the majority of the world's active volcanoes, earthquakes, and ocean trenches. This is actually a horseshoe shape, not a complete ring. The Ring of Fire covers 25,000 miles, runs next to four different continents, and is comprised of multiple plate boundaries.

Where is the Ring of Fire located?

The Ring of Fire makes a horseshoe shape around the Pacific plate. It goes from New Zealand up through Japan, across the Bering Straight, and down both North and South America.

What is the meaning of Ring of Fire?

It is a large area on the Earth's crust that has the majority of the world's volcanoes and earthquakes. It traces the boundaries of the Pacific plate.

Why is it called the Ring of Fire?

The majority of the Earth's active volcanoes are in the Ring of Fire. These repeated eruptions in the same predictable areas helped give it this name.

What features occur at the Ring of Fire?

The features include many active and dormant volcanoes, earthquakes, and ocean trenches. They are all along multiple plate boundaries as well.

Is the Philippines in the Ring of Fire?

The Philippines are just one of the island chains in the Ring of Fire. Others include Tonga, New Hebrides, Indonesian, Japan, Kuril, and Aleutians.

Ring of Fire Location & Facts | Where is the Ring of Fire?
Related Study Materials

How Rivers and Streams Affect the Earth's Surface

What is a Shield Volcano? | Facts & Examples