Ngainunmawi Sonna, Audrey Farley
Explore the characteristics of the romantic period. Along with the aspects of romanticism, also discover when and where did romanticism originate and end. Updated: 02/08/2022

Romanticism isn't the same as the lower-case word "romantic". In fact, the meaning of this intellectual, literary, and artistic movement is quite different. Romanticism began in the late 18th to 19th century in Europe and North America, most notably in England and Germany. Romanticism was a response to the Age of Enlightenment, which saw reason and skepticism as essential to society's development. In contrast to Enlightenment thinkers, the Romantics saw the consequences of the Enlightenment, such as the scientific advancements that led to inhumane conditions during the industrial revolution. The hope to reconnect with the healing qualities of nature and to step away from the busyness of life were aspects of Romanticism that differed from the Enlightenment.

Another way the Romantics responded to Enlightenment rationalism was through transcendentalism, the idea that the divine is within people and nature, thus making the highest authority God rather than the government. Notable Romantic poets and writers, such as William Wordsworth, Samuel Taylor Coleridge, Lord George Byron, William Blake, and Mary and Percy Bysshe Shelley, would go on to influence characteristics of Romanticism, including artistic and literary themes, mythology, aesthetics, point-of-view, personification, and works that reflected the social issues of their time. 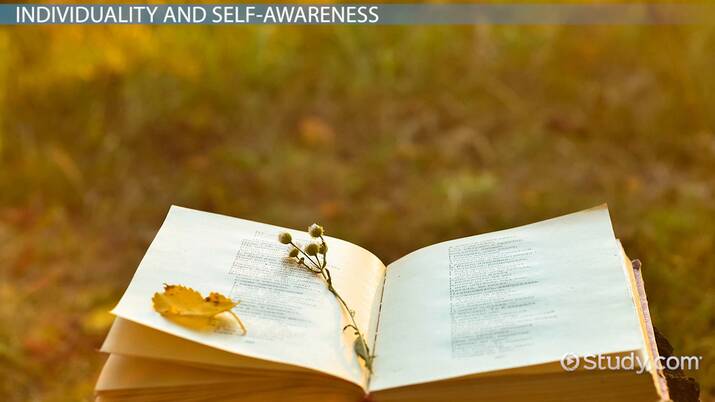 Try it now
Back
Coming up next: Romanticism in Literature: Definition & Characteristics

Characteristics of The Romantic Period

Two central characteristics of the Romantic period are nature and the sublime, which both emphasize the powerful role of nature as a source and place of tranquility, transcendence, and healing. Yet, equally, the sublime presents nature as an awe-inspiring force, allowing the viewer to be swept by their emotions and senses. In addition, emotion and intuition serve as the main ways of knowing and gaining knowledge about oneself. These senses are connected to nature through another romanticism characteristic, imagination, which was defined as having the creative capacity and power to shape the mind and elevate it through nature.

Furthermore, spirituality and the supernatural are qualities of romanticism that allow the reader to feel their human emotions and have new experiences, rather than reasoning and expecting the outcome. In rejecting the ideas of the Enlightenment, the Romanticism movement celebrated childhood and saw it as a time that should not be rushed by adulthood, because children are not bound to demands and rationales.

Lastly, personification was a romanticism era characteristic that allowed the Romantics to attribute human emotions to nature, stretch the boundaries of the imagination, and show the connection humans could have to the natural world.

An important characteristic of the Romantic era is its emphasis on individuality and self-awareness, which can be derived from Rousseau's ideas that an individual who is uncorrupted by society is free. Jean-Jacques Rousseau was a Swiss-born philosopher and writer of the early 18th century. Although he was a part of the Enlightenment era, his ideas sparked the rise and formation of Romantic thought. One of Rousseau's most famous concepts was the idea of "the noble savage". During his time, this was not necessarily meant as a derogatory term, but one that illustrated an individual or group of people who were neither corrupted by industrial nor technological societies. Ultimately, to Rousseau, a "noble savage" remained free from selfish desires, symbolizing innate goodness.

Another characteristic the Romantics valued was emotion and intuition. To the Romantics, unlike the Enlightenment thinkers, the ability to fully experience the world through the senses meant being able to understand the full range of human experience. The literature of the Enlightenment focused heavily on epistolaries (letters) and encyclopedias: essentially, work absent of all emotion except reason.

An essential figure of this time period was William Wordsworth, one of the English poets responsible for ushering in the Romantic era. Wordsworth spoke about emotion in relation to the power of poetry in his work, Lyrical Ballads, as "the spontaneous overflow of feelings: it takes its origin from emotion recollected in tranquility".

According to British philosopher Edmund Burke, the sublime is defined as "an artistic effect productive of the strongest emotion the mind is capable of feeling." The sublime is an overwhelming experience of awe and wonder. An example of the sublime could be a hiker standing before a breathtaking mountainscape or watching thunder roll across the expansive sky. It is the concept of feeling small, but a part of something that transcends.

In his prose poem, Eureka (1848), Edgar Allen Poe captured Romanticism's sublime and transcendent qualities through his attempt to explain the nature of the universe, despite his contempt for the Romantic movement. Poe suggested that when humans die, their souls continue to live on afterward, because he saw humans as designed and part of an infinitely expanding universe. Poe incorporated Enlightenment traits, such as mathematical and scientific terms, yet relied on intuition and imagination&emdashRomantic sensibilities that lean toward transcendentalism.

Unlike Enlightenment, which emphasized the authority of reason and science, Romanticism turned toward the Divine. Romantics believed that the source of authority originated from God and could be experienced through nature, thus attributing tranquility, optimism, and healing properties to connecting with nature. While the Enlightenment period ushered in the rise of atheism, the literature and artistic expressions of the Romantic era saw a resurgence of classical mythology, particularly the Greek mythology we see in contemporary poetry.

Difference Between Romanticism and Age of Enlightenment

The differences between Enlightenment and Romanticism are seen through their different aesthetic and philosophical approaches. Enlightenment thinkers sought out reason and scrutinized everything with a fine dose of skepticism, leading to a departure from religion and advancements in technology and industrialization. On the other hand, Romantics valued freedom, individuality, and emphasized the subjective nature of human experience. Rather than following a collective mindset, they saw the individual's imagination as a means to experience the divine in oneself.

Traits of the Enlightenment

The Romantic era began in England and Germany with the hope that there would be a return to rural life instead of the urbanization brought on by Enlightenment. The human experience began to take precedence over objectivity and the movement largely inspired artistic and literary styles, from first-person point-of-view to integrating the sublime into artwork. The interest in the common man and childhood also grew during this time period because it reflected a way of life that was different from society, just as Jean Jacques Rousseau discusses the idea of the "noble savage" as one who is uncorrupted by society. These Romanticism characteristics connected and elevated the human experience over industrialization.

Furthermore, the idea of transcendentalism contrasted the skepticism ushered in by Enlightenment, placing the emphasis again on the interconnection between the divine, nature, and humanity. Likewise, as English philosopher Edmund Burke also notes about the sublime, it is an experience much larger and more terrifying than oneself. These traits of Romanticism changed the trajectory of where Romantics saw society and how they responded to its change.

What are the aspects of Romanticism?

Aspects of Romanticism are the Sublime, Nature, Individualism, Imagination, Childhood, Emotion, Intuition, Spiritual and the Supernatural. These aspects connect and elevate the human experience to the Divine and the natural world around them.

What was the main feature of romanticism?

A Farewell to Arms by Ernest Hemingway | Summary & Characters

Ode to a Nightingale by John Keats | Analysis, Themes & Summary

A Farewell to Arms by Ernest Hemingway | Summary & Characters

Ode to a Nightingale by John Keats | Analysis, Themes & Summary