Round vs. Flat Character

Stories have various elements that help tell a narrative. One of the more important ones is character. A character is a being in a story who must deal with the conflict in the narrative. Round and flat characters are the different types of characters that an author uses to create a more complex narrative. Writer E. M Forster first defined the use of flat and round characters in his 1927 book Aspects of Writing.

Forster believed that a good novel should have both flat and round characters. Flat characters serve as tools to help move a story along but generally aren't very memorable, while round characters become the focus of the narrative and can experience change and make complex choices. Both, he felt, were necessary since not every character could be fully fleshed out and, in fact, they should not be.

What is a Round Character in a Story?

A round character is a character that is multifaceted and complex. They cannot be summarized in a single sentence and often come into conflict with others in grounded and believable ways. A round character is one that can serve as a surrogate for the reader since they have fully realized lives and backgrounds. A round character may have a favorite meal, drink, or style. Their motivations go beyond surface needs and wants and may stem from deep emotional trauma or triumph.

A round character has a personality that, like a real person, changes depending on the situation. The main protagonist in a story will almost always be a round character because that is who readers will connect with and want to understand, and although many supporting characters are flat, some of them can be round as well.

An example of a round character is Indiana Jones, from the popular film series. He is a devoted archaeologist and adventurer while also working as a university professor. Throughout each film, he solves his problems practically and often violently, at one point threatening to blow up the Ark of the Covenant with a rocket to keep it from falling into the hands of the Nazis. However, he also has a life-long fear of snakes, a seemingly contradictory character trait given his unusual bravery. He also shows a willingness to believe in the supernatural and an increasing embrace of faith as he encounters evidence for the existence of various gods. His personality is impacted by his environment and objectives, just like a real person.

What is a Flat Character in a Story?

For example, in the television series The Blacklist, the character of Dembe is originally a flat character with very little development. He serves as a bodyguard, rarely speaks, and it is implied that he had been a child soldier. His entire character can best be described as "Intimidating strong guy." This characterization remains for much of the early seasons, but as the show progresses, Dembe receives more speaking lines, a full name, and quirks that reveal a complex backstory. Dembe, it turns out, was a victim of child trafficking until he was rescued, and decided to pay his debt by working as a bodyguard. Despite this early trauma, he even manages to forgive the man who sold him into slavery many decades later, showing that despite his ruthlessness, he also has incredible empathy and compassion. He received a formal education after being rescued, knows multiple languages, and even enjoys bowling, and puzzles, and in later seasons reveals he is a grandfather. 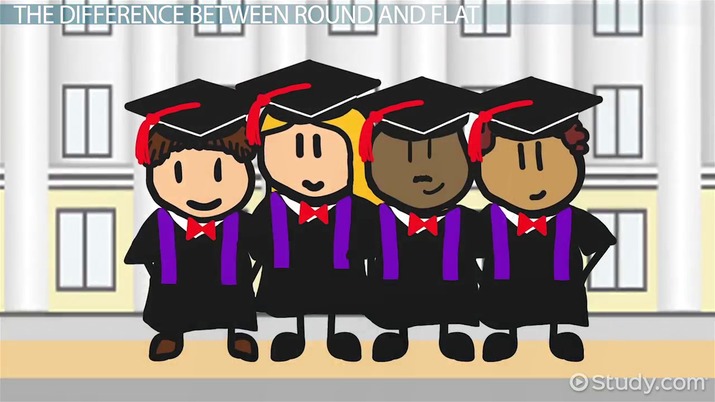 Flat and Round Character Examples

Various popular works provide examples of flat and round characters.

Characters drive a story forward and contend with conflict. A round character can surprise the reader and act like a real person. They have quirks, likes, and depth. A flat character can be fully described in a single sentence and lacks the depth that round characters provide. E. M. Forster argued that a good story needs a combination of flat and round characters to both quickly move the story along and provide complexity when needed. For example, Argus Filch in the Harry Potter series is little more than a bully and authoritarian figure to get in the way of the protagonists. Harry, Ron, and Hermione, on the other hand, are fully fleshed-out characters with histories and personalities.

What makes someone a round character?

A round character should be more than just a stock personality. They should have motivations and history, complex relationships with those around them, and typically grow throughout a story.

What are five traits of a round character?

A round character has personality, likes, quirks, and surprises the reader. They also act like real people and can serve to bring the audience into a work.

What is an example of a flat character?

Argus Filch in the Harry Potter series is a flat character. Like Crabbe and Goyle, he serves only to provide an obstacle for the protagonists and has nothing in the way of depth.