Who Is Samuel Beckett?

Samuel Beckett is a famous writer credited with works like Waiting for Godot, Endgame, and Happy Days. He earned the Nobel Prize for his contributions to literature in 1969. His childhood in Dublin, Ireland, helped to shape him as an academic and a scholar, and he had a short career as a teacher at esteemed schools in Ireland and Paris.

In 1928 he met James Joyce, who had a profound effect on his writing. He served as a secretary for Joyce while Joyce composed Finnegans Wake. He began to write extensively and publish short essays and poetry, and he moved to Paris during World War II. He served in the French Resistance and fled the Nazis with his partner, Suzanne. Beckett's arguably most famous work, Waiting for Godot, defined him as a playwright and writer and he soon saw the publication of his novels, poetry, and plays. The majority of his work was composed and premiered in the years 1950-1970, though he lived for almost twenty years after that. Beckett was awarded the Nobel Prize in Literature in 1969 and spent the remainder of his career out of the spotlight.

Samuel Beckett and his wife Suzanne are buried in Paris.

Samuel Beckett enjoyed his childhood in Dublin in a nice home named Cooldrinagh. He was sent to schools that helped to refine his literary abilities, and he studied English, French, and Italian. By the time of his graduation from Trinity College in 1927, he was known as an elite scholar, a reputation that helped him to attain work that would eventually lead to the publication of his writing.

In November of 1928, Beckett was offered a position as an English lecturer at a famous French school called Ecole Normale Superieure. While at the school, Beckett met the author James Joyce and he helped Joyce with research for his famous novel Finnegans Wake.

Beckett lectured at Trinity College from 1930-1931, but found he did not enjoy the profession. At the time he had published short essays and some poems. After leaving Trinity College, Beckett traveled and wrote essays and poetry. His attempts at publishing his novel Dream of Fair to Middling Women were met with resistance.

1935 saw Beckett's first collection of poems published: "Echo's Bones and Other Precipitates." In 1936, Beckett's novel Murphy was published while he toured Germany and witnessed the country on the brink of war. Beckett permanently relocated to Paris in 1939 and became a friend of Marcel Duchamp and Alberto Giacometti, and he rekindled his friendship with James Joyce. Beckett was in the news in Paris after being stabbed in the chest and nearly dying. The coverage led his future lifelong partner, Suzanne Dechevaux-Dumesnil, to reach out and begin a relationship.

In 1940, the Nazis invaded France and Beckett joined the French Resistance to protest the occupation. Beckett passed messages from spies within France, but when his identity was revealed, he and Suzanne were forced to flee to Roussillon, a small village in southeastern France, where they hid until 1945. During that time, he worked on a novel titled Watt.

On a visit to his parents home in Dublin, Beckett discovered how to differentiate his work from that of James Joyce. He was determined to focus on lack of knowledge and minimalism, while Joyce was known for discovery and creative understanding. While Joyce focused on making meanings for readers, Beckett would focus on meaninglessness. The experience on this visit to Dublin was made into Beckett's play, Krapp's Last Tape, published in 1958. Additionally, though born in Ireland and a native speaker of English, Beckett began to write primarily in French after World War II because he claimed it helped him to write without style.

Waiting for Godot was written in French and titled En attendant Godot. Suzanne helped to circulate the manuscript and it was eventually picked up by Roger Blin. In 1955, the initial reaction to the play was unfavorable but turned positive quickly and it gained international success. Due to the acceptance of Waiting for Godot, Beckett was able to publish Endgame and Happy Days in 1957 and 1961 respectively.

In 1961, Beckett was given creative control as a theater director, and he wrote plays for radio, cinema, and television. During this time his style became minimalist by nature. He received the Nobel Prize in Literature in 1969. Though shy, he often met with writers and scholars to discuss art.

Suzanne and Samuel both died in 1989 within five months of each other and are buried in Paris. 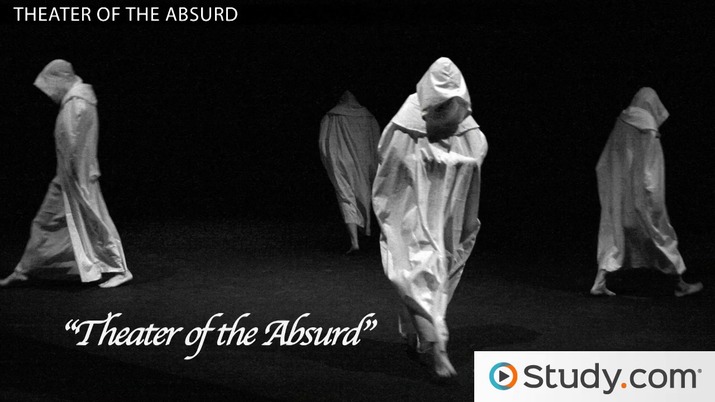 Try it now
Back
Coming up next: Waiting for Godot: Plot, Characters, and Style

Samuel Beckett's plays belong to the genre of Theatre of the Absurd, which highlights dark humor and often focuses on subjects that are typically seen as taboo. The themes of these type of plays are darkly funny and are preoccupied with meaninglessness.

Three of Beckett's most famous plays are:

Beckett's play Waiting for Godot is revered by audiences as a groundbreaking story. The title is just as interesting since Godot never actually shows up in the play.

In the introduction, two men, Vladimir and Estragon, meet on a country road and discuss repenting for their sins. They mention that they are waiting for Godot, but they are unclear on what they asked him for. Suddenly, Pozzo walks up with his abused slave, Lucky, and interacts with the two men. A boy arrives with a message from Godot, telling Vladimir and Estragon that Godot will not arrive that evening but perhaps tomorrow.

The next day the two men return and recall their previous encounter with Pozzo and Lucky. They discuss the practice of thinking, mentioning that thinking has little worth. Now Pozzo arrives, but he has been blinded and Lucky is his guide. Both Lucky and Pozzo are constantly falling down and do not recall meeting Vladimir and Estragon.

The climax occurs when all of the men fall and cannot get up.

At the end of the play the same boy arrives to tell the men that Godot will not come that evening and denies ever seeing Vladimir and Estragon before.

The groundbreaking nature of Waiting for Godot is the fact that it is simplistic yet causes the audience to make connections to philosophy, religion, and the meaning of life. The fact that the play does not have a resolution is integral to its point, which is that everyone in the audience, as well as the characters, are experiencing the same thing: waiting.

Samuel Beckett experienced some early rejection for his writing, yet after Waiting For Godot saw incredible success, his novels were published. He wrote many works that did not see publication until much later than their composition. Beckett's first novel that he wrote was Dream of Fair to Middling Women in 1932; it was published posthumously in 1992.

Others novels published by Beckett include:

Samuel Beckett is known for his poetry, especially "Cascando" and a poem he wrote shortly before his death entitled "What would I do without this world."

His poetry does not contain rhyme and is often characterized by short stanzas with their own grammatical rules.

A famous stanza from "Cascando" states:

of loving and not you

of being loved and not by you

"What would I do without this world" contemplates the beauty yet meaninglessness of the world:

what would I do without this silence where the murmurs die

the pantings the frenzies towards succour towards love

without this sky that soars

Some other poems Beckett is most famous for include:

Samuel Beckett was honored with many awards in his lifetime:

Samuel Beckett died at the age of 83, five months after Suzanne passed away. It is suggested that he suffered from Parkinson's disease and emphysema. While in the hospital prior to his death, he composed "What would I do without this world."

Samuel Beckett was a writer, playwright, and poet originally from Dublin, Ireland. Many in education took note of his abilities, and while in his first career as a teacher at Ecole Normale Superieure he served as secretary to James Joyce during the composition of Joyce's novel Finnegans Wake. He began to publish in his own accord and moved to Paris. A few years later, he joined the French Resistance in World War II and was forced into hiding to flee the Nazis until the war ended.

Though born in Ireland and a native speaker of English, Beckett wrote many of his works primarily in French. His most popular play, Waiting for Godot, belongs to the genre of Theatre of the Absurd due to its darkly funny nature and its preoccupation with meaninglessness. Beckett's Waiting for Godot, Endgame, and Happy Days all premiered within the years of 1950-1970. In 1969, he was awarded the Nobel Prize in Literature for his contributions as a writer of novels, plays, and poetry. Beckett died in 1989 at the age of 83.

What did Samuel Beckett win the Nobel Prize for?

Samuel Beckett won the Nobel Prize for Literature in 1969. He is celebrated for his international success in Waiting for Godot.

What is Samuel Beckett best known for?

Samuel Beckett is best known for his play, Waiting for Godot, which is about waiting for a man who never appears. The four characters Vladimir, Estragon, Pozzo, and Lucky meet on two nights as they wait for Godot, as does the audience.

What was Samuel Beckett's philosophy?

Samuel Beckett was a minimalist and often gave ambiguous answers to questions. Instead of using art for discovery he focused on what he did not know.

Why did Beckett leave Ireland?

Beckett left Ireland to move to Paris to collaborate with other writers. After World War II, he felt French was his language of choice and preferred to write in French over English and Italian.