What Is the San Andreas Fault?

The San Andreas Fault (or SAF) is the most well-known fault in the world. Stretching along California, USA, the San Andreas Fault system covers highly populated areas and receives a lot of attention whenever something happens. From the famous 1906 San Francisco earthquake to less devastating earthquakes that have happened more recently, the SAF gets significant news coverage whenever the ground shakes. Many people have therefore at least heard about this fault system.

To understand what the SAF is, it's important to first know the definition of a fault. A fault is a crack in the Earth's crust where the two sides move against each other. There are different types of faults, including divergent faults, convergent faults, and dip-slip faults. The San Andreas Fault definition is that of a strike-slip, or transform, fault. In a strike-slip fault, the two sides of the fracture move horizontal and parallel to the fault. The two sides move horizontally past one another. To be even more technical, the SAF is a right lateral transform fault, meaning if a person was standing on each side of the fault, each would see the other person move to the right.

How Deep Is the San Andreas Fault?

Faults do not go forever until the center of the Earth. The depth of a fault can vary depending on multiple factors. How deep the San Andreas Fault is, approximately, is 10 miles (16 km). In length it stretches about 800 miles (1,287 km), curving somewhat north and south through much of California.

The SAF is where two tectonic plates touch. The Pacific Plate is moving northwest while the North American Plate is moving southeast. The San Andreas Fault location begins in Northern California, south of Cape Mendocino. It moves southeast going through major cities such as Santa Rosa, San Francisco, Desert Hot Springs, San Jose, and winds down to San Bernardino outside of Los Angeles and the Salton Sea. There are several branching faults that come out from the SAF, making up the fault system. It also runs along less populated areas, such as the northern edge of the San Gabriel mountains. 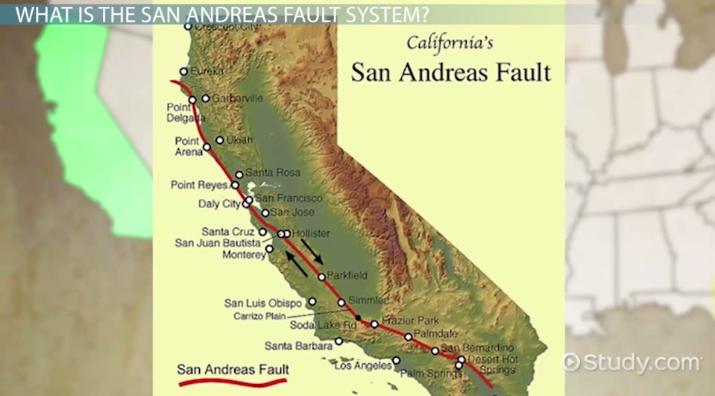 The SAF is often shown on maps as a long, single line. This is not accurate, but is done for simplicity. As stated in the previous section, several branching faults come out from the SAF, creating an entire system. In the San Andreas Fault map image in this lesson, there are a few thinner blue lines that show some of those branching faults that come off of it. In the tectonic plates map, notice where the Pacific Plate and North American Plate share a border. That border creates the San Andreas Fault.

The San Andreas Fault Boundary type is a transform boundary; that is, where two plates slide past each other. The Pacific Plate and North American Plate move relative to each other about 2.5 inches each year (about the same speed as your fingernails grow). The average slip rate (how much the plates slip past each other) for the SAF is only about 1.5 inches each year, due to rocks from the two plates getting stuck on each other. At any of the places these two plates touch, they can get stuck and cause an earthquake. The difference between these amounts of movement are constantly being compensated for by the many slip faults there are within the SAF system.

The largest impact faults have is earthquakes. When the plates get stuck on each other (also called "locked"), the rocks deform and build up stress. Eventually, the rocks break or slip, allowing the plates to suddenly move which creates an earthquake. This entire process is called the elastic rebound theory. As the plates move and scrape against each other they create seismic waves that shake the ground above. According to this elastic rebound theory, usually not all of the accumulated energy is released in the initial earthquake. What then happens is what is called "aftershocks", as smaller earthquakes take place after the main one to expel the rest of the energy.

There is a lot of San Andreas Fault activity; it produces more earthquakes than any other fault in California. One of the most devastating earthquakes is a result of the SAF; the San Francisco earthquake of 1906. This earthquake struck on April 18, 1906 and sparked fires that burned for three days. It is now estimated that 3,000 people lost their lives and over half the population of 400,000 people were left homeless. Over 28,000 buildings were destroyed and hundreds of millions of dollars worth of damage was left in its wake.

The SAF on average produces thousands of small quakes every year, most of them too small to be felt. When the next "big one" will happen is an often-asked question. It is impossible to predict exactly when one will take place. Scientists estimate that, based on the amount of slip that occurs in the SAF, 1906-type earthquakes happen approximately every 200 years. What they do know is the two plates that make up the SAF will continue to move and reshape California for millions of years to come.

A fault is a crack in the Earth's crust where the two sides move against each other. The San Andreas Fault (SAF) is the most famous fault on the planet. It is a strike-slip fault, also known as a transform fault, which means the two sides move horizontal and parallel to the fault and each other. The SAF is the most active fault in California. Many major earthquakes have happened along the SAF, including the massive San Francisco earthquake of 1906 that killed over 3,000 people, damaged over 28,000 buildings, started fires, and caused more than $400 million in damages. Another San Francisco earthquake in 1989 killed 67 people and caused over $5 billion in damages.

The SAF is 10 miles deep and runs through California for about 800 miles, starting in the northwest and moving southeast. Multiple fault lines run off of the SAF, making this area an entire fault system. The SAF runs through or near major cities such as San Francisco and Los Angeles. This fault line is a transform boundary created by two tectonic plates sliding past each other; the Pacific and North American plates. The Pacific Plate moves in a northwest direction while the North American plate moves in a southeast direction. As the plates move, rocks can get locked, or stuck. The rocks deform and build up stress, eventually breaking and allowing the plate to move suddenly, creating an earthquake. This process is called the elastic rebound theory. The earthquakes that are created are measured by magnitude, which measures the amount of energy that is released. There is typically a large earthquake followed by one or multiple aftershocks, smaller earthquakes that release any remaining energy.

What happens if the San Andreas fault moves?

The San Andreas fault moves all the time, about 2.5 inches every year. If the rocks in the fault lock, build up stress and then suddenly release, it can cause an earthquake.

What cities does San Andreas fault run through?

The SAF runs through and by several major cities. Cities such as Desert Hot Springs, San Francisco, San Jose, and Los Angeles are all on or near the fault line.

Where is the San Andreas fault located?

The San Andreas Fault is located in California, USA. It starts in the northern part of the state and moves southeast.

Pyramids of Giza Purpose & History | Where Are the Pyramids Located?