Kelly Carroll, Yolanda Williams
Learn what Schachter-Singer's two-factor theory of emotion is. Discover examples of the Schachter-Singer Theory, their experiment, and criticisms of the theory. Updated: 04/08/2022

The Schachter-Singer two-factor theory of emotion is a theory outlining two components of emotion, an initial physiological arousal and a subsequent cognitive process. The cognitive identification or label of the emotion is assigned based on the person's immediate environment. This theory was introduced by Stanley Schachter and Jerome Singer in the 1960s.

Example of Schachter-Singer's Theory of Emotion

The following scenario describes a Schachter-Singer two-factor theory example. A young woman is walking her dog alone at night and sees an unknown man coming toward her. The young woman's heart rate noticeably rises, and she begins to tremble. She believes these physiological responses are due to fear and thinks, "I am scared!" In this scenario, the man approaching her is a stimulating event, and her heart racing and trembling are a physiological arousal. Relating her bodily responses to fear is known as cognitive labeling. This leads to the conscious experience of the emotion of fear.

In this scenario, the young woman's immediate environment plays a role in her interpretation of her physiological responses. The context that she is alone at night and the approaching person is unknown. These factors all contribute to the labeling of the experienced emotion as fear. Alternatively, if the woman had been walking her dog on a beautiful, bright morning and noticed a smiling older man coming toward her, she might interpret the same bodily responses of increased heart rate and trembling as concern or interest for the well-being of the older man.

The same bodily responses can be associated with very different emotions, depending on the context. For instance, if a man notices an increased heart rate and trembling just before an exam, he might interpret this physiological response as nervousness or anxiety. If a person notices an increase in his heart rate at a dinner party, he might link that physical response to emotions of enthusiasm and happiness.

Schachter and Singer conducted a well-known research study to test their theory of emotion in 1962. The basis of the study was to investigate if the same type of physiological arousal could have different effects based on the conditions of the immediate environment. In this study, 184 male college students were told they were going to be injected with a drug to improve their eyesight. The drug was actually epinephrine, also known as adrenaline, a hormone involved in the stress response that can lead to increased heart rate, trembling, deeper and faster breathing, and flushing. One subset of the men was informed of the potential side effects of the drug, and another subset was not. Afterward, the men were sent to a room with a confederate, who was a person posing as a study participant. The confederate displayed behavior either of anger or euphoria, and the researchers observed how the men reacted in response. One subset of men was given a placebo instead of epinephrine.

Schachter and Singer found that the men who were given epinephrine and were not told about potential side effects felt either angrier or happier than the men who were told about the drug's side effects. The men that were placed in a room with the euphoric confederate had a higher inclination to interpret their physical response as happiness. Alternatively, the uninformed men placed with an angry confederate had a higher rate of interpretation of their bodily responses as anger.

Singer and Schachter's cognitive theory predicted that if the participants had an emotional experience that they could not explain, they would cognitively label the emotion based on their immediate environment. The study showed that the men who had no information regarding their physical response were more likely to be swayed by the emotional state of the confederate. 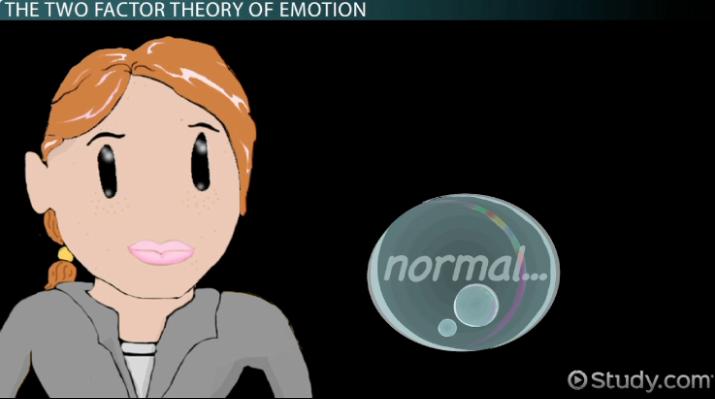 Comparison to Other Theories of Emotion

The Schachter-Singer two-factor theory of emotion links physiological arousal and cognitive processes in the experience of emotions. There are some other prominent theories of emotion with different explanations.

The Cannon-Bard theory of emotion explains that a physiological arousal and emotional experience happen at the same time and are independent processes. According to this theory, a person feels an emotion like fear at the same time that they have a bodily response in line with fear.

Since the development of the Schachter-Singer two-factor theory of emotion, there has been criticism of the theory. Subsequent studies attempting to replicate the findings of the 1962 Schachter-Singer study have not completely supported the results and have produced contradictory findings. In studies by Marshall and Zimbardo, participants were not more inclined to behave happily when placed with a happy confederate versus a neutral confederate.

The Schachter-Singer two-factor theory of emotion is a theory that explains emotional experiences are brought about by two components, a physiological arousal and cognitive processes. This theory was developed by Stanley Schachter and Jerome Singer in the 1960s. According to this theory of emotion, the emotional response is informed by a person's immediate environment. A stimulating event occurs, an individual develops a physiological arousal, and then cognitively labels the feeling within the context of the environment, and experiences the emotion. Signs of physiological arousal can include increased heart rate, faster and deeper breathing, and perspiration. Schachter and Singer conducted a well-known research investigation using epinephrine to test their theory. The study concluded that people with no information about their physiological response were more likely to be influenced by the mood of a confederate, a person posing as a study participant who expressed either euphoria or anger.

What did Schachter and Singer's experiment demonstrate?

Schachter and Singer completed a study to test their two-factor theory of emotion in the early 1960s. The experiment showed that men who had no information explaining their physiological response had a higher likelihood of being influenced by the emotional state of the confederate in the study. The confederate was a person posing as a participant who expressed either emotion of euphoria or anger.

What is Schachter-Singer's two-factor theory of emotion?

The Schachter-Singer theory of emotion is a theory that states that emotion is due to two factors, physiological arousal and cognitive processes. The theory explains that people use cues from their immediate environment to inform their emotions.

What is an example of the Schachter-Singer theory?

An example of the Schachter-Singer theory of emotion is a person being at a dinner party with friends they love (stimulating event) and feeling an increased heart rate and perspiration (physiological arousal). The person cognitively recognizes their feelings as excitement and enthusiasm (cognitive labeling) and experiences excitement and enthusiasm (emotional experience).

Cognitive Disabilities Model & Examples | What is the Allen Model?

Emotional Development Through the Lifespan