Karuna Samuel Finch, LaRita Williams
Know the relationship between the integrated and differential rate law. Learn about the second-order integrated rate law with examples and a sample question. Updated: 02/17/2022

The term rate relates to the amount of change in one entity in proportion to another. In finance, exchange rates are used to calculate how the value of one currency will convert to another. The rate of change in the position of a vehicle is investigated in physics. Similarly, in applied chemistry, reaction rates are investigated and defined as the change in the quantity of the reactant (or the product) with time. For example, if a drug is being synthesized in a laboratory, one may want to know how long it will take for the reactant amount to reduce to a specific value, so that the product may be extracted.

Calculus may be used to infer the connection between a reactant's concentration and time from a rate law. Details about the rate law are covered in the next section. We can derive integrated rate laws that quantitatively give concentration as a function of time by aggregating or "integrating" the instantaneous rates of a reaction from the start of the reaction until some predetermined time. The order of the reaction determines the form of the integrated rate law.

For a reaction that is of the second order (n=2) in which the reactant A is converted to some products: {eq}aA\longrightarrow Products {/eq}

Since n= 2, its integration will yield the following form: 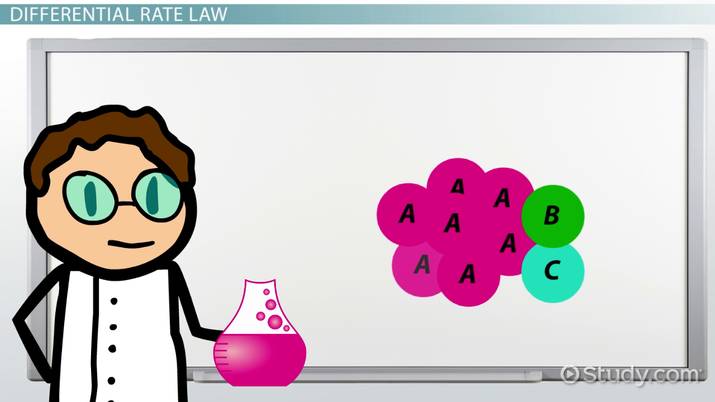 Coming up next: State Functions in Thermochemistry

Chemical reactions are reversible; and once the product starts to accumulate, the backward reaction starts. Consider the decomposition of nitrogen dioxide, {eq}2NO_2 \longrightarrow 2NO + O_2 {/eq}. When the reaction begins and in the very moments of this process, the amounts of nitrogen monoxide and oxygen are quite less, enough to be overlooked. Over time, their amounts will grow. If one wants to know the rate of decomposition of {eq}NO_2 {/eq}, a difference between the forward and reverse reaction rates will be considered. Such calculations can get quite complicated. To avoid them, scientists study reaction rates as soon as the process begins. For our reaction in discussion, the rate of the reaction is proportional to the concentration of {eq}NO_2 {/eq} raised to an exponent n.

So, Equation 1 is actually the differential rate law expression and is commonly referred to as the rate law. It is defined as an expression that indicates how the rate is affected by the concentrations of reactants. The numerical values of the exponent n (i.e. the order of the reaction) must be determined experimentally and is not necessarily related to the coefficient used to balance the equation. The rate law describes what is happening in the chemical reaction at a molecular level, but it does not incorporate the concentration of products. This is simply because the reaction is being studied at a time where it has just begun and products have either not appeared or are negligible.

Consider a simple reaction that has a single reactant, {eq}aA \longrightarrow Products {/eq}. Assuming this reaction is of the second-order with respect to A (i.e. n=2), the rate law can be expressed as:

This rate law can be put into a different form using a calculus operation known as integration, which yields the expression:

Some known examples of second order reactions are as follows:

The second order rate law equation as expressed in Equation 3 is in the form {eq}y = mx+b {/eq} , where

In contrast, if a straight line is not formed, the reaction is most likely not of the second order.

In the second-order reaction rate equation, if of the four variables, k,t,{eq}[A]_t {/eq} and {eq}[A]_0 {/eq}, any three are known, the unknown one can be calculated. For example, consider the gas-phase breakdown of ammonia into hydrogen and nitrogen. This is a second order reaction with a rate constant of 0.085 / M s. What will be the concentration of ammonia after 30 minutes if the initial concentration was 0.15 M? Substituting the known values in Equation 2, we have:

Thereby, we know that the concentration of ammonia will decrease to 0.046 within 30 seconds of the reaction.

The investigation of reaction rates is an essential component of applied chemistry. It is accomplished by examining the rate at which the reactants vanish or the products appear over time. Because many chemical reactions are reversible, both the depletion and creation of reactants occur after a specific point in time, complicating calculations. To avoid such complications, reactions are researched closer to their onset. Early in the reaction, either the number of products is minimal and the reversible reaction has not begun, or the values are so little that they are disregarded during computations. This results in the differential rate law (or rate law), which states that the rate of a reaction is a direct reflection of the reactant concentrations. {eq}Rate = k[A]_n {/eq} is the differential rate law expression for a simple reaction, such as {eq}aA \longrightarrow Products {/eq}. Here, k is the rate constant and n is the reaction order, which must be established experimentally.

If any three of the four variables, k,t, {eq}[A]_t {/eq}, and {eq}[A]_0 {/eq}, are known in the second-order reaction rate equation, the unknown one may be computed. The breakdown of Nitrosyl bromide; {eq}2NOBr_2 \longrightarrow NO+Br_2 {/eq} is an example of a second order reaction that has been established via experimentation.

What are integrated laws?

The integrated rate laws are a function of the initial concentration and the actual concentration of one or more reactants at a certain time interval. Their mathematical forms are specific to the order of the reaction they are associated with.

What is the second order rate law?

The equation, 1/At = kt + 1/A0 represents the second order rate law, as it draws a relationship between the concentration of the reactant and time.

What is an example of a second order reaction?

Dimerization of butadiene; 2C4H6(g) ? C8H12, is a second order reaction with respect to the reactant butadiene. This means if the concentration of butadiene is doubled, the rate is increased four times.

What is a 2nd order reaction?

If a reaction is of the second order with respect to a certain reactant, it means that if the concentration of that reactant is increased, the rate of the reaction will increase quadratically.

Glass Properties, Use & Types | What is Glass?

How to Find Rate Constant | How to Determine Order of Reaction