Andria Emerson, Amanda Robb
Learn to define what secretin is. Discover how the hormone secretin functions and where it is produced. Find out how secretin helps in digestion and water balance. Updated: 06/29/2022

Secretin was the first hormone to be discovered in the early 1900s. A hormone is a substance that acts like a messenger providing chemical signals to different parts of the body. Hormones are released into the bloodstream where they interact with target cells to communicate messages and signal biochemical pathways to occur. Secretin is a hormone found in most mammals that regulates digestion and water balance in the body. Digestion is the process of breaking down food via enzymes and mechanical means into substances the organism can use. 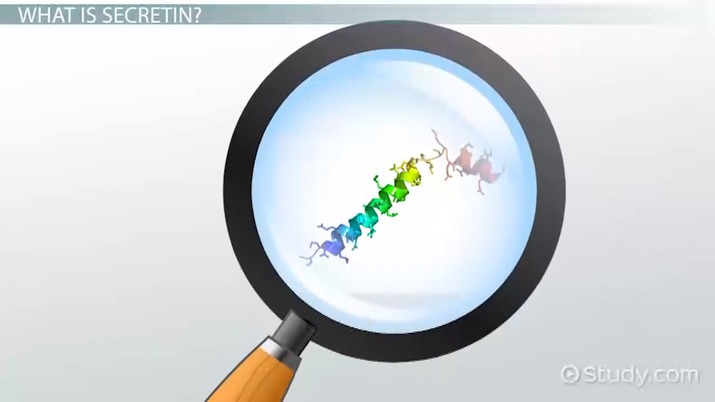 Coming up next: Aldose vs. Ketose Sugars

Where is Secretin Produced?

Secretin is produced by specialized cells called S cells found in the duodenum. The duodenum connects to the stomach and is the first part of the small intestine. The role of the duodenum is to absorb nutrients such as vitamins, minerals, carbohydrates, fats, proteins, and water. When pH levels in the duodenum become low, secretin is released. pH is a measure of the acidity or basicity of a substance. Acids have a pH below 7 and bases have a pH above 7.

What does secretin do? Secretin has many different functions, however, its main roles are to stimulate the pancreas to secrete pancreatic juices, regulate the pH in the small intestines, and regulate water balance in cells.

Secretin plays a role in maintaining water balance or osmolality in cells. The concentration of water in cells is strictly regulated in order to prevent cells from swelling or contracting. Cells that are too large or too small to not function properly can become damaged and die. In order to control osmolality, water intake and excretion by cells must be regulated. When water levels are low, cells in the hypothalamus located in the brain release vasopressin which causes the kidney to increase water reabsorption. Vasopressin is a hormone produced by the body that signals the kidneys to reduce urine flow and retain water. Secretin and vasopressin both play a role in maintaining water balance.

How Does the Hormone Secretin Help in Digestion?

Secretin aids in digestion by stimulating the pancreas to make pancreatic fluids. The pancreas is a gland that secretes enzymes into the duodenum necessary for digestion. The pancreas also contains specialized cells that regulate blood sugar. Pancreatic juices are usually alkaline or more basic and break down sugars, fats, and starches. As pH levels drop from gastric juices, secretin is stimulated. This in return stimulates cells in the pancreas to produce bicarbonate. The bicarbonate combines with the acidic gastric juices neutralizing the environment and bringing the pH back to normal levels.

How Does Secretin Regulate Water Balance?

Secretin plays a role in regulating water balance by acting on the hypothalamus, pituitary gland, and kidneys. When water levels in the body are low, secretin is released by cells in the hypothalamus found in the brain. This causes vasopressin to be released.

Secretin is mainly used to aid in the diagnosis of disorders affecting the pancreas, stomach, and intestines. It has also been used to treat and diagnose the following:

Secretin also plays a role in diagnosing pancreatic insufficiency. When cells in the pancreas become damaged the pancreas does not produce the required amount of digestive enzymes needed for digestion. This can lead to malnutrition and other serious complications. The secretin stimulation test utilizes intravenous injections of secretin to examine how the pancreas is triggered by the secretin. After one to two hours, the fluids released by the pancreas into the duodenum are collected and examined. Abnormal values of digestive enzymes collected can lead medical professionals to diagnose individuals with pancreatic insufficiency.

Secretin is a hormone found in most mammals that regulates digestion and water balance in the body. Digestion is the process of breaking down food via enzymes and mechanical means into substances the organism can use. Secretin is produced by specialized cells called S cells found in the duodenum and affects the pancreas, kidneys, and stomach. The three main roles of secretin include regulating gastric acid secretion, regulating pancreatic bicarbonate secretion, and regulating water balance in cells. Secretin aids in digestion by stimulating the pancreas to make pancreatic fluids. When increased amounts of gastric juices build, the pH lowers triggering the release of secretin. Secretin then stimulates cells in the pancreas to produce bicarbonate which neutralizes the acids and balances the pH back to normal levels. Secretin regulates water balance in the body. When water levels in the body are low, secretin is released by cells in the hypothalamus found in the brain.

Secretin is also used in the medical field. Secretin is mainly used to aid in the diagnosis of disorders affecting the pancreas, stomach, and intestines, but has also been used to treat and diagnose many different disorders including ulcers, pancreatitis, overactive parathyroid glands, and even heart failure.

What stimulates release of secretin?

Secretin is stimulated by gastric acids that cause the pH in the duodenum to become more acidic. Secretin is also utilized in connection with vasopressin to maintain water balance in cells.

What is the function of secretin?

2. Regulate the pH in the small intestines

What is the role of secretin in the digestion process?

Secretin stimulates the pancreas to make pancreatic fluids. Pancreatic fluids contain bicarbonate which helps to neutralize stomach acids. This causes the environment of the intestine to be less acidic.

Create an account
Secretin Function & Overview | What Does Secretin Do?
Start today. Try it now
AP Biology: Help and Review

Secretin Function & Overview | What Does Secretin Do?
Related Study Materials

Thermoreceptors in the Body | Function & Location