What was the settlement house movement? The settlement house movement was a social movement that supported the idea of creating large housing projects to provide mobility for the working class. It grew out of a desire for reform that had already had effects in several other areas, such as the creation of numerous charities to help people in poverty. Widespread support for this idea began in Great Britain in the 1860s and quickly spread to other Western countries such as the United States and Canada. The Industrial Revolution and its social effects, such as long working hours, the safety hazards of the factory system, and the self-absorption of industrialists, alarmed the idealistic Christian Socialists who desired to help the poor rise above their condition through education and moral improvement.

Settlement work was concerned with helping the poor as a social class rather than on an individual basis. It was theorized that if members of the poor working class lived in proximity to educated, refined people, their work morale and education status would improve as well. To aid this, half of the tenants of these houses were ''refined'' graduates of upper-class colleges who lived there to aid the working class by association. House organizers hoped that the sub-culture of higher education would elevate the paradigm of the poor and help them to rise out of their situation.

The origins of the settlement house movement lie in the Industrial Revolution. In the late-19th-century, there were no organized reform movements or labor laws to aid the working class. The factory system had just barely begun, which led to workers' income becoming drastically reduced. In the United States, a massive influx of immigration made this problem much worse. Christian leaders advanced the theory of the Social Gospel. The Social Gospel stated that true Christians cared more for the poor workers and immigrants and that wealthy Christians had an obligation to help the lower classes of society rather than work toward their own capitalist interests.

One of the first settlement houses was created in East London in 1875. Samuel A. Barnett, the vicar of a local Anglican congregation, and Arnold Toynbee, an Oxford graduate, attempted to create an environment in which they could aid the poor working class through education. Under Barnett's direction, Toynbee lectured the working class on economics and politics. Nine years later, after Toynbee's death, Toynbee Hall was founded in Whitechapel. Most of the students who worked with the poor tenants were volunteers who worked at the house for various reasons (course credit, desire to do relief work, career experience, etc.). 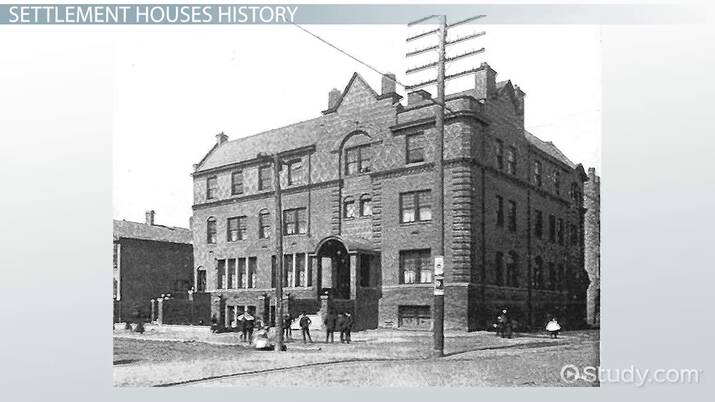 Coming up next: Stalwarts: Definition & History

What is a Settlement House? The settlement house definition is best understood as being a housing project designed for the purpose of elevating the situation of members of the poor working class. The organizers of these houses hoped to reform the characteristics, actions, and perspectives of their tenants. Once these aspects of their lives were changed, they could become educated and take higher-paying jobs, moving out of the settlement houses and providing more for their families.

Only a few rooms were intended as residences. The bulk of the house was reserved for food preparation, education, exercise, recreation, and other activities to assist the poor. Tenants, mostly college graduates from upper-class universities and colleges, maintained the building and worked with the working class.

Administrators of the houses and educators worked not only with the tenants of the houses but also with leaders of the community, including factory owners and politicians. Services offered included infant nurseries, job training, and medical care. Although the founders of the houses had high aspirations, many of the workers who had the most interaction with the working class were amateurs who could not have much effect.

In the United States, Robert A. Woods founded the Andover House in Boston in 1892. His perspective viewed the settlement houses as natural opportunities for college students to study the causes of working-class poverty. He urged his students to find the root of these causes and help their tenants in a malleable, flexible way rather than relying on idealistic standards.

Jane Addams was another major proponent of the settlement house movement. Her visit to Toynbee Hall so impressed her that she desired to provide a similar experience for students and the working class in her hometown of Chicago. Her Hull House, co-founded with Ellen Gates Starr in 1889, is possibly the most famous settlement house created in the United States. Hull House was created to provide the poor an avenue for the creation of cultural and social events and groups to further their interests and provide for their needs. One of her main motivations was her observation that policymakers had failed to create legal solutions to the problems of the working class. She was also motivated by the Social Gospel and a desire to provide for the upper class to directly assist the working poor.

What Was the Purpose of Settlement Houses?

How did settlement houses help the poor? Settlement houses provided the environment for the poor tenants to create social clubs, community groups, and cultural events. This promoted fellowship between the residents. Education programs were also conducted under the auspices of the houses. For example, the kindergarten program initiated at Hull House served up to 24 students. Adults and youth attended lecture series from community leaders and university graduates and educators.

House administrators also coordinated their efforts with community leaders outside of the houses, including city council members, religious leaders, and labor groups. They also benefitted the larger community, as shown by the creation of a public library at the Hull House.

Who Received Benefits from Settlement Houses?

The main beneficiaries of the settlement house model included:

The settlement house had many positive effects such as:

Many of the goals and benefits of the settlement house movement and programs have been continued to this day by social workers.

The settlement house movement was a social movement that supported the idea of creating large housing projects to provide mobility and social services for the working class urban poor. It grew out of a desire for reform that had already had effects in several other areas, such as the creation of numerous charities to help people in poverty, which led to this period being known as the Progressive Era. The Industrial Revolution and its social effects, such as long working hours, the safety hazards of the factory system, and the self-absorption of industrialists, alarmed the idealistic Christian Socialists who desired to help the poor rise above their condition through education and moral improvement in their push to follow the Social Gospel, which stated that true Christians cared more for the poor workers and immigrants, and that wealthy Christians had an obligation to help the lower classes of society rather than work toward their own capitalist interests. As part of their efforts to create these houses, reformers often turned to political engagement. The most prominent of these supporters was Jane Addams.

The settlement house had many positive effects such as:

University students assisted the working class and other impoverished communities through a variety of methods including in-house programs and collaborative measures with community leaders. Services included infant nurseries, job training, and medical care.

Was the settlement house movement successful?

Settlement houses were successful in some ways but not in others. They failed to eliminate poverty and all of its causes, but they were able to alleviate some of them.

What did the settlement house movement do?

The settlement movement was part of a broader effort for social reform. House founders attempted to uplift the working class urban poor by exposing them to high society, assisting their families, and providing educational opportunities.

How did settlement houses work?

Settlement houses were housing projects designed to elevate the situation of the members of the poor working class. University students and other volunteers lived in the houses and provided a variety of social, cultural, and educational programs for community members.