Sidereal, Synodic, and Solar Time Periods: How We Keep Time

Since the beginning of early civilizations, different cultures have tried to track and keep time. In order to help their society to function, many civilizations looked to the sky to create a dating system. Many systems were used over thousands of years and some were even quite accurate. For example, unlike the calendar used today, the Mayan calendar used two different years to track time. The first, called a tzolkin, was used to track days and followed constellations across the nighttime sky. The second, called a haab, was used to track different seasons by using the Sun. Since the Mayan calendar used multiple references to track time, including the Sun and other stars, their calendar was incredibly accurate.

Today, most of the modern world tracks time by using the Sun, however, astronomers have determined there are three major ways to measure time. These include:

What is Sidereal Time?

One way astronomers can determine the time is through sidereal time. Sidereal time involves measuring the rotational rate of the Earth by using a distant star (not the Sun) as a reference point. Therefore, when using sidereal time, any star in the nighttime sky will move across the same point at the same time on a sidereal day. Though sidereal time can be calculated from any point on Earth, astronomers have developed a system that can be used internationally. Each sidereal day begins when the Sun is in a vernal equinox and crosses the prime meridian which is a line of longitude in London, England. The vernal equinox occurs when the Sun is exactly above the equator and both day and night are equal in length. This occurs in the northern hemisphere on March 20th or 21st and occurs in the southern hemisphere on September 22nd or 23rd.

However, any distant star can be used to calculate a sidereal day, which is the unit of time in this type of system. For example, anyone can note the time that a specific star in the sky appears directly overhead. A sidereal day is the time it takes for that exact star to appear directly overhead the following day. Sidereal time is helpful to astronomers when aiming their telescopes to a specific location in the sky. Additionally, astronomers use the sidereal time to calculate the rotational rate of other planets in the solar system.

What is Synodic Time?

Another way astronomers calculate time is by using synodic time. Synodic time measures the average time it takes for a celestial body's movement in relation to the Sun when observed from Earth. Ancient civilizations used the Moon and the Sun to create their own synodic time systems. For example, many civilizations developed calendars based on the different phases of the Moon. This type of calendar is called a lunar calendar and uses synodic time. A lunar month is the time it takes the Moon to complete one cycle of its lunar phases (New Moon, waxing crescent, first quarter, etc.). This is also known as the Moon's synodic period.

Astronomers can also calculate the synodic periods of other planets and celestial objects in the solar system. For example, the synodic period of Mars is 780 days which is the longest in the solar system. This is because Mars moves along its orbital path slower than Earth. For example, scientists can begin to record synodic time when the Earth and Mars are in opposition or when the Earth is located between the Sun and Mars. A year later, Earth has completed one orbit while Mars has only completed half an orbit around the Sun. It would take almost another year (a total of 780 days) for Mars and Earth to be in opposition again. Astronomers use this measurement of time to calculate a planet's synodic period.

What is Solar (or Tropical) Time?

The third way astronomers calculate time is by using the Sun as a reference point and is known as solar time. Solar time is sometimes referred to as tropical time. A solar day is an average time it takes for the Sun to reach its highest point from one day to the next. When the Sun is directly overhead, it is local noon in solar time. Most modern-day watches and clocks use solar time. Solar time can also be calculated by determining a solar year or the time it takes for two vernal equinoxes to appear. A solar year or tropical year on Earth is about 365 days. Since Earth's orbit around the Sun is 360 degrees, the Earth moves about 1 degree per day. 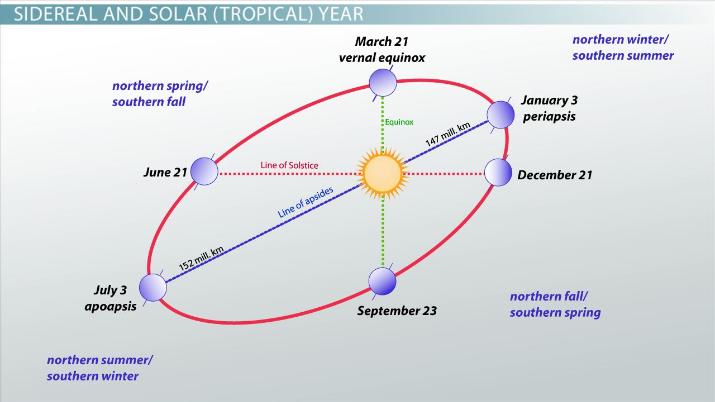 Coming up next: Apparent Solar Time vs. Mean Solar Time

Since the beginning of civilizations, cultures have created different systems to track and record time. Today, astronomers use three different types of systems to measure time. Sidereal time is measured by the time it for the Earth to complete one rotation on its axis so that a distant star will return to the same location in the sky. Since any distant star can be used, scientists created a system used internationally which begins a sidereal day when the Sun crosses the prime meridian on the vernal equinox. A vernal equinox occurs when there is an equal time of day and night and the Sun travels north across the equator. Additionally, instead of using one distant star as a reference point, scientists can use the movement of celestial bodies in the solar system with regards to the Sun. This is called synodic time and measures the time it takes for a celestial body's movement, like the rotation of the Moon, in relation to the Sun. Lastly, solar time uses the Sun as a reference point.

What is the synodic period of the Moon?

How long is a sidereal day?

What is the difference between sidereal and synodic?

What is meant by synodic period?

Synodic period is the measurement of the time it takes a celestial body to return to the same location in relation to the Sun it orbits as observed from Earth. Synodic periods can be calculated for the Moon as well as other planets.

Motion of the Moon: Sidereal Month vs. Synodic Month

Predicting When The Moon Will Rise and Set