Sides of the Brain

The brain has two different types of matter. They are named for their colors. Gray matter appears a light gray color and it contains most of the neuronal cell bodies. This portion is responsible for muscle control, sensory perception, decision making, learning, and self-control among many other functions. It makes up the majority of the cerebral cortex. White matter in the brain appears white because it is covered in a waxy substance called myelin. This portion is responsible for relaying and coordinating messages and information from one area of the brain and spinal cord to another.

What Connects the Left and Right Hemispheres of the Brain? 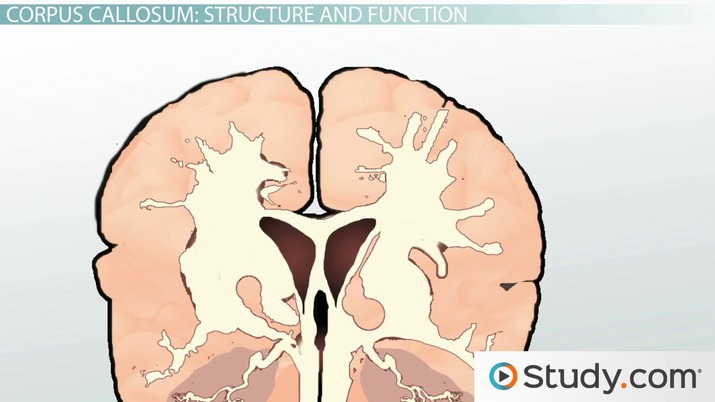 Coming up next: Parts of the Brain Stem: The Medulla Oblongata and Pons

This also allowed for many split-brain studies. These studies proved that each hemisphere can do every function, but both hemispheres have functions they are better at than the other. For example, the left brain is better at verbal tasks and the right brain is better at emotional tasks. However, the right brain can still produce words and phrases, but they aren't as complex. The left brain can understand emotion, but at a more basic level. Ideally, both sides of the brain work together so a person is able to verbally express complex emotions. There have been cases of people born with only half of a brain or needing to have half of their brain removed for medical reasons. These people are often able to live a full life. Some go on to earn advanced degrees while others struggle to complete high school. This is similar to people with complete brains! This supports the idea that while two hemisphere brains are ideal, a single hemisphere can allow a complete and healthy life.

There was an old theory that the left hemisphere of the brain held the functions related to logic and the right hemisphere was responsible for creativity. People would say they were more "left brained" or more "right brained" to describe their strengths. However, the brain isn't that simple. Yes, the left brain is typically responsible for language, and the right brain is typically responsible for emotion. However, people don't really have a dominant side of the brain. In fact, during brain scans it is impossible to tell the difference between a mathematician and an artist.

It has been demonstrated through multiple studies that both hemispheres of the brain work together. Logic is assisted by creativity and many creative things are based in logic. There isn't a single function that is limited to being fully on one side and while people have preferences for different skills, it is related to their personality, not the function of their brain.

The human brain is a complex and fascinating organ. The majority of the brain is called the cerebrum. This is the part most people picture when they hear the word brain. The cerebrum is divided into two hemispheres: left and right. It is covered in a layer called the cerebral cortex. The two hemispheres are separated by a long groove called the longitudinal fissure. The hemispheres are connected and communicate with each other through the corpus callosum. The cerebrum has two different types of tissue called white matter and gray matter. Gray matter is, not surprisingly, gray and contains many nerves. It makes up the majority of the cerebrum. White matter appears white because it is covered in a waxy substance called myelin. White matter helps communicate and move messages throughout the brain. The corpus callosum is made of mostly white matter.

It was once believed that each side of the brain controlled different things, but recent research has proved that hypothesis false. Some areas of the brain are better at doing tasks, for example the left side is better with language and the right side is better with emotions, but both sides can perform all functions. People who had their corpus callosum cut to prevent the two hemispheres from communicating have provided excellent research opportunities for studying the brain. New brain imaging techniques allow even more knowledge of how human brains process information.

What is the difference between right and left brain?

What sides of your brain control what?