Copyright
Jeffrey Mettee, Maria Howard
What is a simile? Learn about the simile definition, simile examples, and types of similes. Also learn how similes are used in literature, songs, and speech. Updated: 06/10/2021

What is a Simile?

A simile is a group of words that use "like" or ''as'' to compare two things. The writer of a simile is making a connection between the two elements of the simile. A more formal definition for a simile is figurative language designed to compare two nouns using either the adverb like or as. Regardless of how formal or casual the definition of simile is, the construction is always the same: two elements are compared, most often using ''like'' or ''as''. 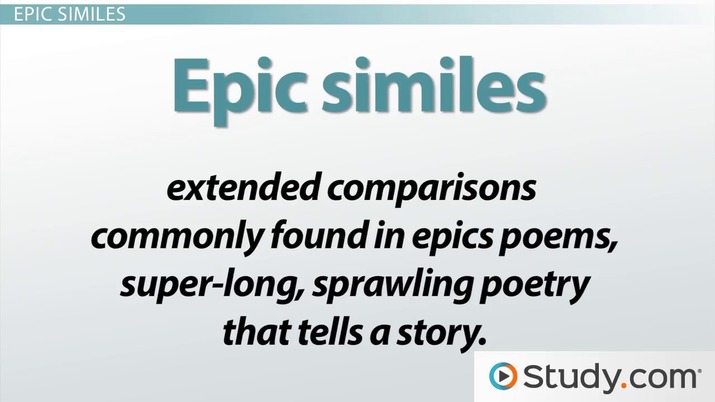 Coming up next: Personification and Apostrophe: Differences & Examples

A simile is a type of metaphor that draws a comparison between two unrelated things using ''like'' or ''as''. A writer will use a simile to highlight common qualities between the two elements of the comparison. For example, the statement ''He was drawn to the ocean like a moth to a flame'' uses ''like'' to compare a person's attraction to the ocean and a moth's attraction to a flame.

The word ''simile'' comes from the Latin word similis, meaning similar or like, and our understanding of the term began during the 15th century and was championed by writers from the time period such as William Shakespeare.

Anyone telling a story does their best to make it exciting for an audience. Similes are one of the tools at a writer's disposal that help create interest. Without the use of similes, the description of the world would be dull and boring.

Imagine reading a story and the author wrote, ''It rained all day.'' While that idea is clear, it's not particularly interesting. Now suppose, instead, the author wrote, ''It rained as long as it would take you to walk around the world.'' Describing the rain as lasting as long as it would take someone to walk around the world implies that the rain continued for a remarkably long time. This simile comparing the length of a rainy period to walking around the world adds emphasis and interest. The comparison allows the reader to build an image for themselves and depth to an otherwise mundane description of rain.

Here's a short list of common similes that are used every day.

Similes are written in two general styles. A simile is created by using ''as'' to create a comparison between two things, or a simile is created by using the word ''like'' to connect two dissimilar things. Similes are everywhere! When listening to music, the lyrics will almost certainly contain similes. Likewise, authors constantly use similes to draw readers into the worlds they create. In fact, people use similes in everyday conversations to embellish stories they tell their friends and family.

Here are some examples of similes that might appear in everyday speech.

Similes are critical to vibrant storytelling. Authors use similes to describe characters, settings, actions, and emotions. The following is a list of similes in literature.

Just like writers of poetry and prose, songwriters and lyricists use simile to express their ideas. Turn on a radio or listen to a music streaming service and chances are a simile will appear in the song lyrics.

Advertising and political slogans often make use of similes because similes tend to be dynamic and exciting.

Poets love to use similes in their writing. The ancient Greek poets used similes in their epic poems so much that epic similes are also known as Homeric similes, named after the poet Homer. Epic similes are extended comparisons that may carry on for several lines of text that interrupt the flow of the story but bring vivid detail to the reader. Sometimes the structure uses phrases like ''just as'' and ''so'' or ''that's how'' and ''as'', but these phrases function in the same way ''like'' or ''as'' does in a regular simile.

Here are some examples:

All similes are metaphors, but not all metaphors are similes. In other words, a simile is a type of metaphor. The difference is that whereas a simile uses ''like'' or ''as'' to build comparison between dissimilar things, metaphors create comparison by figuratively linking a word or phrase to an object or action. The connection built by a metaphor can be more subtle because there are no signal words to alert the reader or listener that a comparison is being made. Often, a simile can easily be turned into a metaphor by removing ''like'' or ''as.''

Similes are often used to embellish or exaggerate the description of an object or an event. This overstatement is known as hyperbole. For example, when a person is described as ''being as skinny as a toothpick,'' the reader or listener is not meant to take the statement literally. The impossibility of a person being the exact width of a toothpick creates hyperbole, and the use of ''as'' in this comparison makes the statement a simile that uses hyperbole.

The use of similes has its limitations. Overusing any literary device or form of figurative language can stand in the way of good writing. In addition, writers sometimes create weak similes by inaccurately comparing two things or using a simile that isn't appropriate to the audience or tone of a piece of writing. Worse yet, an author might use a simile that doesn't say what they actually intended.

For example, the sentence ''He was out of breath like a panting dog'' might have been intended by the author to describe how hard a character was breathing after walking up a flight of stairs. However, dogs don't always pant because they are winded. They also pant when they are hot. So, the reader might be confused as to which comparison is being made. Is the character hot? Tired? Either way, the author in this example would be better served by picking a different simile.

Similes are one of the most widely used literary devices because they help to communicate ideas through comparing dissimilar objects and actions. People use them in everyday conversation just as much as writers use them in their work. Here are some key points to remember about similes.

What are some famous similes?

"How does it feel to be without a home, like a complete unknown, like a rolling stone?"

"And it seems to me you lived your life like a candle in the wind."

What's an example of a simile?

Some examples of similes are:

as cute as a button

as shiny as a new pin

as clean as a whistle

as proud as a peacock

What are the 5 example of simile?

5 examples of similes are:

as busy as a bee

as blind as a bat

as cold as ice

Simile Examples & Types | What is a Simile?
Related Study Materials

Metaphor Concept, Types & Examples | What is a Metaphor?

Ambiguity in Literature Examples | What is Ambiguity?

Epithet Examples in Literature | What is an Epithet?

Cliche Overview & Examples | What is a Cliche?