Who Is the God of the Sky?

In ancient cultures around the world, people have told stories about powerful deities who live in the heavens and watch over the workings of human beings. The appearance of a sky god in so many cultures would suggest that the concept is universal. Civilizations that worshiped sky gods include:

As such, dishonoring a sky god could bring long periods of night and/or drought.

Those who worshiped sky gods did so because they held firm beliefs about the ability of such deities to control aspects of their daily life and survival. This includes: 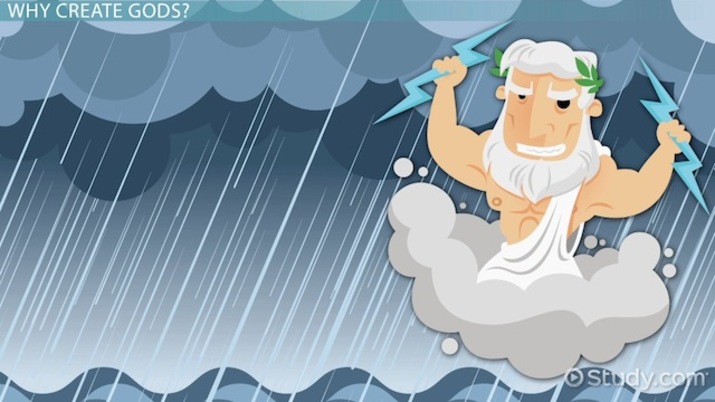 Coming up next: Agnosticism: Definition & Types

Who Is the Egyptian Sky God?

Because the gods were modeled after humans and animals, they required food, drink, and shelter. The Ancient Egyptians took caring for the gods very seriously by offering tributes in the form of:

Although archaeological evidence shows that worship of mother goddess Nut was minimal, this fact should not detract from the importance given her in the mythology.

Nut (pronounced like newt) would most likely be considered the quintessential goddess of the sky in Egyptian mythology. She is the wife and counterpart to Geb, god of the earth. Stories describe Nut as the physical manifestation of the sky itself. As the stories tell, Nut gives birth to the sun, Re, every morning. In depictions from the New Kingdom period, her body is ornamented with stars. Effigies also feature the sun prominently, either being swallowed or birthed by the mother goddess.

Nut had many children:

Horus: God of the Sky

The Egyptian Horus god of the sky holds a particularly strong, and elusive, place in the mythology. He is known as the god of light and day, and therefore of the sky. He is depicted with the head of a falcon.

He appears in two manifestations:

The worship of Horus is entwined with rituals honoring his parents Isis and Osiris. Festivals throughout the year coinciding with the equinoxes celebrated the birth, death, and rebirth of the gods. Supplicants would act out a play depicting the myth of Isis and Osiris, symbolizing the rebirth of the king. The Sed festival, for example, was held on the thirty year rule of the king. The king would dress in ceremonial attire and demonstrate his vitality. Ceremonies incorporated:

All of these attributes were highly symbolic, serving to associate the king with a godly presence.

The plays performed at the festivals enacted the myth of Isis and Osiris. As the story goes, Osiris was the eldest son of Geb, making him king upon his father's death. Enraged with jealousy, another of Geb's sons, Set, killed Osiris and dismembered his body. Set then ascended to the throne.

Grief-stricken, Isis reassembles her husband's body and brings him back to life with her godly powers. Once he has been resurrected, Osiris impregnates Isis, and Horus is born. When Horus becomes an adult, he struggles to gain the throne himself, eventually killing Set in battle. Horus avenges his father's death.

Horus' ascent to the throne takes the form of a contest with Set, judged by the gods. They performed a series of battles in which each demonstrated their strength and honor. Set cheated while Horus performed nobly.

Some versions of the myth end the contest in a tie. Others say Horus claims the throne after much deliberation among the gods. Since Set is depicted as an underhanded trickster, Horus takes on the attributes of honor and nobility.

Horus' four sons are attributed to the Ancient Egyptian burial process, in which the body's organs are removed and placed in ceremonial vases. The four organs associated with Horus' sons were mummified and placed in special receptacles called canopic jars.

Who Is the Greek God of the Sky?

Within the Ancient Greek pantheon, or family of gods, there are many gods associated with the sky. Though the Ancient Greeks had no scripture, their religious practice infused everyday life. Sanctuaries were erected in the honor of specific gods, and were situated in places that reflected those deity's attributes. Temples of the sky gods would have been located in elevated places, for instance. Sanctuaries were separated off from surrounding areas by a wall. Temples housed an altar and statue of the god or goddess. Other characteristics of the temple include sacred trees or springs.

Animal sacrifice was a common religious act. Goats or sheep were usually the victims, with the worshipers consuming the meat after the slaughter. Sacrifices such as these were made with the expectation of receiving gifts from the gods. Festivals were also a prominent facet of Ancient Greek religious life. Some such festivals devoted to sky gods include:

Zeus: God of the Sky

Zeus god of the sky and wielder of thunder was king of the gods. Zeus was one of the children of the Titan, Cronos. Cronos was vengeful, and Zeus followed after his father. In fear of being overthrown, Cronos swallowed his children. But Rhea, Cronos' wife and Zeus' mother, placed a stone in Zeus' place.

Zeus held a central place in the Greek festivals:

To claim his place as the king of the gods, Zeus overthrew his father. This occurred in what is known as the Battle of the Titans. Zeus resurrected his siblings from Cronos' stomach, and they waged war against the old gods. Zeus used his power to wield thunder and lightning to defeat his father.

Uranus: God of the Sky

Before Zeus became Ancient Greece's sky god, there was Uranus god of the sky, the father of the Titan and of Cronos. His power is attributed to the sky, but not much is known about how the Ancient Greeks worshiped this almighty of deities.

Who Is the Roman God of the Sky?

Just as in Greek tradition, the Romans worshiped many gods of the sky; there is no single Roman god of the sky. Because of the closeness of their ancient civilizations, both chronologically and geographically, the Roman and Greek civilizations share much in common. Jupiter can be understood as a counterpart to Zeus, for example. As such, the Roman temples of the sky gods have close similarities to their Greek counterparts.

Jupiter: God of Sky and Thunder

Jupiter god of sky and thunder has more similarities to Zeus than differences. Indeed, Jupiter borrows so heavily from Zeus' Greek incarnation that they are virtually indiscernible.

Jupiter was son of Saturn and Ops, the Roman equivalents of Uranus and Rhea. He was attributed to the sky, sun, and moon, as well as thunder, light, dawn, and rain.

On the Ides, which correspond to the full moons, Jupiter's priest would sacrifice a lamb. Additionally, the Roman festival Aquoelicum was dedicated to honoring Jupiter's power to bring rain.

Like the Ancient Greeks, the Roman pantheon assigned a handful of gods the powers of sky, sun, thunder, and moon. Some examples include:

Anu, also known as An, (literally sky, heaven) was sky god of the Ancient Mesopotamians. Anu sky god, like other gods of the sky across cultures, was:

Unlike the sky gods of Greece and Rome, Anu was supreme; Along with Enlil (god of storm) and Ea/Enki (god of water), Anu created the Earth. Although Anu was the supreme creator, his sons Enlil and Ea were the ones revered and worshiped in Sumerian culture. Temples were erected in their names, in which cults performed ceremonies and bequeathed offerings.

Who is the Huron and Iroquois Goddess of the Sky?

According to Native American Huron and Iroquois mythology, Atahensic was the mother goddess of humankind. Native American mythology relays that there are two levels of the world: Earth and Heaven. According to Huron myth, Atahensic fell to earth from the heavens. In the Iroquois creation myth, the Sky People lived on a floating island. The pregnant Sky Woman was pushed through a hole in the ground by a jealous husband.

Thus, Native American cultures were matriarchal (ruled by women) like the Egyptians (Nut), unlike the patriarchal Greeks and Romans, because their creation myth featured a woman. Native American tribes worshipped the sky goddess at intervals throughout the year, principally when they coincided with agricultural seasons.

Around the world and throughout history, cultures have told stories about the godly men and women who created the world. Many cultures feature the sky, heavens, sun, or moon in these stories. The sky gods can be found in global mythology, mainly Egyptian, Greek, Roman, Sumerian, and Native American. Across cultures, sky gods feature in the pantheon, or family of gods.

In one paragraph, write an essay that explains why civilizations create gods.

Example: Creating gods helps people understand the workings of nature, such as storms.

Write an essay of at least three to four paragraphs that discusses Native American sky gods. Your essay should explain the story of Atahensic, and also describe the roles of Loon and Great Turtle. Also, make sure that your essay addresses how Native American matriarchal societies influenced stories about their gods.

Example: Many Native American groups, such as the Huron and the Iroquois, lived in matriarchal societies. This helps explain why Atahensic was so powerful and had no husband; she didn't need one.

Create a family tree of the ancient Egyptian sky gods. Your family tree should also note what areas of nature each god controlled.

Example: Set controlled storms as well as the desert.

Make a PowerPoint presentation that details the ancient Greek and ancient Roman sky gods. Make sure that your presentation explains notable acts of each god.

Example: Selene drove the moon across the sky at night in a white chariot.

Choose one of the ancient Egyptian, Greek, Roman, or Native American gods mentioned in the lesson and research that god further. Present your research findings in an essay of at least two to three paragraphs in length.

Example: You want to learn more about Cronus, because, after all, he was the father of Zeus.

Hades the God in Greek Mythology | Who is Hades?

Chaldean Empire & Culture | Who Were the Chaldeans?

The Lion of the Tribe of Judah: Symbol & Meaning

How to Calculate Percentage Discounts

7 Catholic Sacraments | What is a Sacrament?