Copyright
Reed Hepler, Yolanda Williams, Lesley Chapel
Learn all about society. Understand the definition of society, learn the different types of society and their characteristics, and see examples of societies. Updated: 02/18/2022

What is a Society?

The definition of ''society'' comes from sociology. A society is a group of people who live together in order to assist each other in living life and improving their circumstances. There are varying levels of cohesion and many different elements in different types of societies.

There are three types of society (early, developing, and advanced) throughout the world, and each of these has two forms.

The two forms of society that have been classified as being ''early'' are hunter-gatherer societies and pastoral societies. These societies did not have firm ties to specific geographical areas, and they were mostly concerned with providing for their immediate and extended families.

Developing societies include horticultural or agricultural societies, in which individuals grew or maintained crops to provide food and other resources for larger groups of people than their families.

Advanced societies are industrial and post-industrial societies in which technology and manufacturing for large groups of people are the most important aspects regarding economics. Each of these forms of society has economic, political, social, and cultural aspects that are positive and negative.

While there are many different characteristics of the various forms and types of societies, and while their immediate purposes and priorities are distinct, they all have one common goal: the survival of the individuals. As communities become more organized and developed, another major priority is created: the improvement of the quality of life of individuals who live in that society.

The common elements of all societies, regardless of their type or form, include: 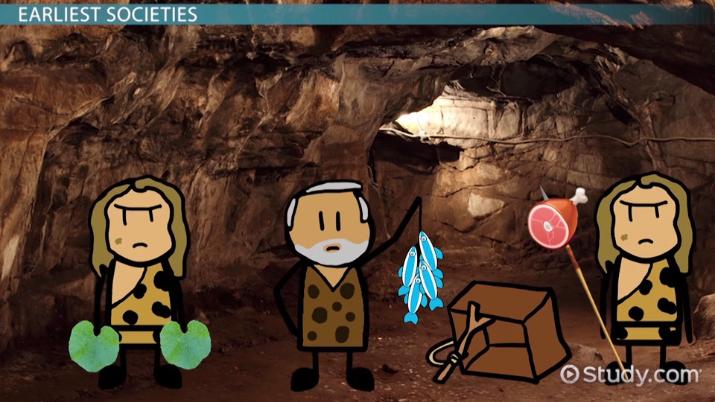 Try it now
Back
Coming up next: What Is Social Cohesion? - Definition & Theory

There are many different types of society. The three main types are early societies, developing societies, and advanced societies.

Early societies mostly focused on the cultivation of resources that were readily available to them through hunting and gathering and taking care of domesticated animals. As far as gaining resources was concerned, early societies used those that they could access through walking or using basic tools. Developing societies created systems of creating and harvesting resources through horticulture and agriculture. The primary products of these systems were needs such as food and shelter. In advanced societies, the major products of manufacturing and industry were wants such as technology and advanced communication. Also, advanced societies shifted from focusing on physical goods to spreading ideas. As a result, advanced societies have experienced breakthroughs in scientific research.

The first type of the different types of society is early society. The two major forms of society in this category are hunter-gatherer societies and pastoral societies.

Pastoral societies began around twelve thousand years ago. They domesticated animals and began raising them for food and menial labor purposes.

The main characteristics of hunter-gatherer societies are:

The main characteristics of pastoral societies include:

The second of the different types of society is a developing society. In this category are horticultural societies and agricultural societies. Individuals in these societies raised plants and animals expressly for the purposes of using them for food or other purposes.

Horticultural societies were created between ten and twelve thousand years ago in Latin America, the Middle East, and Asia. Horticulture refers to the raising of plants to reap the benefits of their individual properties. In fact, the entire society was essentially built around the life cycle of plants and how easily they could be cultivated.

Agricultural societies arose around eight and a half thousand years ago during the time period known as the ''Agricultural Revolution.'' Agriculture refers to raising plants primarily in order to use them for food.

The main characteristics of agriculture societies are:

The main characteristics of industrial societies include:

The main characteristics of post-industrial societies include:

There are many examples of societies, including historical societies and modern societies.

Early Polynesian cultures practiced horticulture, which has had an enduring effect on the Polynesian culture that can be seen today. In fact, people there introduced horticultural practices to the Hawaiian islands around 300 C.E. Polynesians not only used plants for medicinal purposes and food, but they also used them to create various items of material culture. For example, coconut milk was used as a sealant in Polynesian canoes.

One example of an advanced, industrial society is the United States during the Second Industrial Revolution. During this time period, factories, railroads, and other societal innovations enabled mass production, transportation, and shipping. Cities also became urbanized, which led to a dramatic increase in population density. The invention of the telephone by Alexander Graham Bell brought about quick communication that made transportation and production even more efficient. With all of these positive effects came many negative counterparts. Factory workers were paid small wages and had very hazardous working conditions. The environments around the major, urban cities were polluted by the factories, railroads and other technological advances.

A society is a group of individuals who have agreed to live together and who seek to help each other survive and improve their quality of life. There are three main types of society: early, developing, and advanced societies. Early societies included hunter-gatherer and pastoral societies. Developing societies are horticultural and agricultural societies. Advanced societies are industrial and post-industrial. Although all of these forms have different immediate goals and purposes, they all seek to preserve their individuals.

Hunter-gatherer societies were the earliest form of human society. The main source of resources in these societies was hunting (including trapping and fishing) and gathering edible plants. They were replaced around twelve thousand years ago with pastoral societies. Ten thousand years ago, horticultural societies arose in Latin America, Asia, and the Middle East. Agricultural societies began to exist during the Agricultural Revolution and developed a system of orderly plant cultivation. Industrial societies were created during the First Industrial Revolution around two hundred fifty years ago. These societies initiated the development of forms of mass communication, increased specialization of jobs, and technology that took advantage of electricity. Industrial societies also resulted in innovations in transportation, shipping, and residential areas. Also, more people began to live in the city than in agricultural areas. The most recent form of society is the post-industrial revolution. This period focuses on scientific research, the spread of ideas, providing services rather than goods, an expectation that higher education will produce graduates who will be able to handle technology, and a shift in the work environment from cities to homes.

Create an outline that lists and describes the six types of societies in sociology.

Create a set of flashcards that list all the characteristics of each society. You have one card per characteristic. Each time you draw a card, either by yourself or with a partner, state what type of society that characteristic belongs to.

Example: If you draw a card that says, "They only move when their animals can no longer graze on the land," then you know that this is a characteristic of a pastoral society.

Write an essay that explains the effects of the Agricultural Revolution on agrarian societies. Tip: Think of how the use of animals might make farm labor more efficient and easier for humans, and the kinds of effects this may have on the society as a whole.

What is a simple definition of society?

A society is a group of people who agree to live together and work together. The most important priority to this group is the survival of the individuals in the group. As societies change, the other goals, and the tactics used to accomplish the goal of survival, also change.

What are the three types of societies?

Non-Psychotic Disorders of the Nervous System

Political Restoration and Reform in Europe

The Development of Early Cultures & Society

Society Types & Examples | What is a Society?
Related Study Materials

Non-Psychotic Disorders of the Nervous System

Political Restoration and Reform in Europe

The Development of Early Cultures & Society