What Are Sociocultural Factors?

Societies are characterized and differentiated by their sociocultural factors. These characterizing conditions act as social and cultural forces that influence feelings, attitudes, values, thoughts, beliefs, interactions, and behaviors of individual groups.

Sociocultural factors play a vital role in shaping social development and functioning. They are synonymous with the traditions, patterns, and beliefs unique to a community or any other population group. It is important to understand these sociocultural factors to ensure thriving economies and effective governance. These forces drive decision-making in any given society. Understanding how these forces manifest and operate is key for businesses. Companies seeking to market their brands must demonstrate an in-depth knowledge of basic sociocultural information related to the target group.

People behave and respond to different circumstances, contexts, brands, and policies depending on their sociocultural factors. These drivers influence how people view and perceive the world and other people around them. In a business context, the willingness of a market to purchase a particular product or service depends on sociocultural factors. For example, Islam forbids the consumption of pork. It would be difficult to establish and successfully run a pork-selling outlet that targets such an Arab-dominated market. Sociocultural factors affect business, economic, political, environmental, and religious outcomes.

Diverse sociocultural factors characterize different communities, geographical areas, and population groups. What is considered normal in one society may be deemed immoral or unusual in another. For example, dressing in bikinis in the Western world is perfectly normal, but in Arab countries this is prohibited among women.

In countries such as Saudi Arabia, Qatar, and Iran, women are culturally required to cover their entire bodies with the Burqa. Selling bikinis in Middle-Eastern nations would not make much business sense.

Businesses can enhance their effectiveness and chances of success if they align their strategies to the sociocultural factors of the target market.

Sociocultural factors differ from region to region depending on population factors, government policies, traditions, lifestyles, beliefs, and the environment. For instance, people in large urban societies are more likely to experiment with new and exotic dishes than people in small towns and rural areas. A business person planning to establish a Tacos and Tortillas restaurant would be better off targeting large cities than small towns in the countryside. Other examples of sociocultural factors include:

Societies are defined by the set of sociocultural values that shape how they approach situations, interpret the world, perceive money and make lifestyle decisions. These values also determine how different societies consider risks. Sociocultural values impact the economic development of countries. For example, sociocultural values allowed countries such as China to shift from agricultural intensive economies into industrialized nations.

Social values have a direct impact on living standards. The sociocultural values that impact interactions and economic development include innovation and religion. More complex examples include: 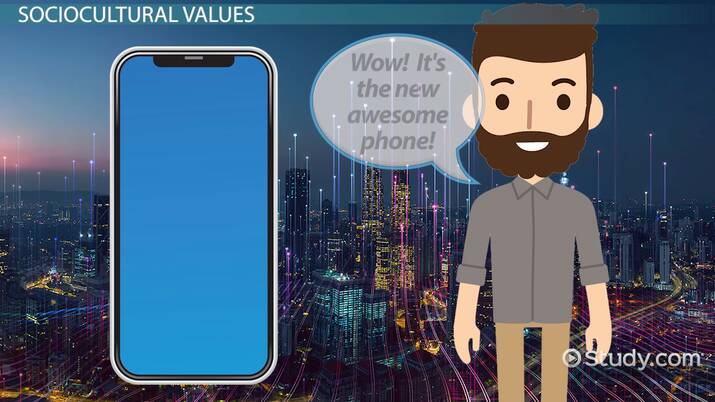 Each culture has diverse factors that influence its sociocultural development and cultural change. Understanding the interaction between these factors provides sociologists with valuable insight into social phenomena.

The next sections explore sociocultural development and cultural change in detail.

There are many examples of sociocultural factors that contribute to economic development. These factors interact within social, economic, political, and religious contexts, leading to cultural change. Notable examples include;

The above examples of specific sociocultural factors lead to economic change and cultural development by shaping how people interact, approach issues and perceive products in the market.

Language is one sociocultural factor that shapes businesses and leads to cultural change. For example, the Soviet Occupation of the Cold War era led many Europeans to develop a negative perception of Russia and its cultural aspects such as language. For this reason, products associated with Russian labelling may be negatively perceived. European businesses must carefully choose the languages they use.

Another example of sociocultural factors is how societies perceive mental health issues. Research shows that minority communities are less likely to seek mental health intervention than the majority White community. In a business context, this means that mental health experts will find a ready market in White dominated markets.

Also, business norms in America are different from China. Chinese people emphasize personal relationships while Americans are more concerned with business deals. Business representative should not ignore the importance of showing courtesy when meeting Chinese clients, which is not the case in the western world.

Customer preferences influence consumption patterns and behavior, thus leading to cultural development. In America, Europe, China and other developed economies, consumers love access to information, entertainment and social media. This makes them more likely to purchase electronic products, such as smartphones, than in developing African economies. In this case, the smartphone industry in these developed countries is more likely to grow.

People with low-risk propensity are less likely to participate in high-risk business deals. Materialistic societies emphasize the importance of physical belongings at the expense of interpersonal/social relationships. Meanwhile, collectivism places greater focus on the well-being of the entire population while individualism is when self-gain is more important than the success of greater society. Cultural factors contribute to sociocultural development and cultural change. For example, sociocultural values drive economic development. This concept refers to the process of moving from an agricultural-based society to an industrialized economy. Economic development improves the standard of living and quality of life of citizens. Sociocultural factors are important in shaping communities and countries.

Prompts About the Impact of Sociocultural Factors on Economic Development:

In approximately one to two paragraphs, write an essay that defines sociocultural values and economic development, and describes how these two elements are interconnected.

Example: A huge amount of economic development occurred as a result of the Industrial Revolution.

Write an essay of about one to two paragraphs that explains the dynamics of risk propensity and innovation in a society. Consider the following question in your essay: How might innovation and risk propensity play off of each other?

Example: A society with a low threshold for risk propensity may lack innovation.

In at least two paragraphs, write an essay that answers the following question: How can the values of thrift, religion, and obedience impact a society's economic development?

Create a chart, poster, or some other type of graphic organizer that compares and contrasts materialism and post-materialism and shows how these values can manifest in a society.

Example: A post-materialistic society might be one in which the norm is for employers to offer free yoga classes to their employees. This would reflect this society's focus on spiritual growth.

Make a poster, chart, or some other type of graphic organizer that compares and contrasts collectivism versus individualism.

Example: In collectivism, economic endeavors are meant to benefit the masses.

What is the meaning of sociocultural factors?

What are examples of sociocultural factors?

Social Characteristics of an Aging Population

Administering Assessments in the Classroom