Copyright
Nicole Conaway, Elizabeth Friedl
How does the sun heat the Earth? Learn about solar energy and see how the sun affects weather and climate. Study the Earth's tilt and its impact on the seasons. Updated: 12/03/2021

What is Solar Energy?

The warmth felt on a summer day, light during the day time, and a renewable resource for generating electricity all come from solar energy. Solar energy is the term used to describe the energy that comes from the sun. This energy travels through space in waves. It takes the form of heat, light, and ultraviolet radiation that is invisible to humans but does affect the Earth and the life of the planet. Solar energy makes it possible for life to exist on Earth. It warms the oceans and provides the energy for plants to grow, and plays a role in determining which plants grow in different regions. The sun's energy warms the Earth's atmosphere to a temperature that can sustain life. 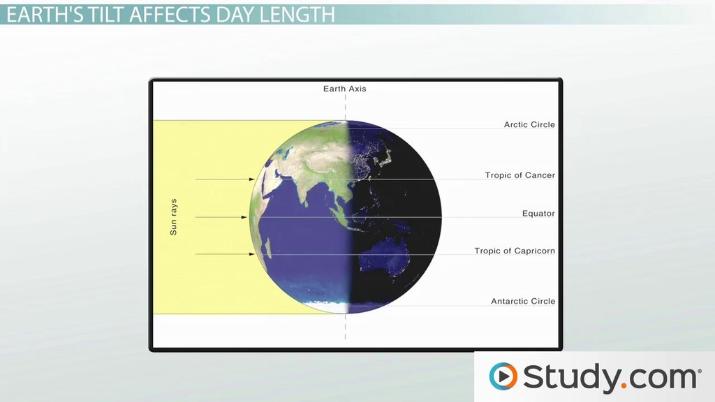 Coming up next: Temperature, Clouds, Wind & Humidity on the Atmospheric Cycle

How Does the Sun Heat the Earth?

Heat from the sun is so powerful it can be felt on Earth 93,000,000 miles away. How does the sun heat the earth across such a great distance? And just how does the sun heat the Earth? The answers to these questions have to do with properties of both the sun and the Earth itself. Energy released from the sun travels through space in waves called radiation. It can take several forms including light, heat, and ultraviolet radiation. Not all of this radiation reaches the surface of the Earth. Some of it is filtered or reflected back into space by the atmosphere - the layers of air that surround the Earth. For the solar energy that does reach Earths surface, some is absorbed and some is returned to the atmosphere. This is known as terrestrial radiation.

How Does the Sun Affect Weather and Climate?

The sun affects both weather and climate on Earth. Climate is the average weather over a region. Weather includes temperature, rainfall, wind, humidity, and other factors. It might seem obvious that solar energy is related to temperature, but it is also closely related to rainfall. Solar energy causes evaporation of surface water. This water vapor rises into the atmosphere where it forms clouds that can shower rain back down onto the earth.

The shape of the Earth affects the amount of warmth and light received by the Earth. Because the earth is round, or spherical, and tilted, solar energy is not evenly distributed over the entire planet. Some parts of the earth receive more or less solar radiation than others. This is because the angle of the sun rays on Earth are more direct in some areas and less direct in others. At the equator around the center of the earth, sun rays hit the earth directly in a straight line. This concentrates the sun's energy. But moving north and south from the equator toward the poles of the earth, the angle at which sunlight reaches the earth increases. As a result an equal amount of solar energy is spread over a wider area. This leads to colder temperatures and climates as latitude increases moving away from the equator, with the most extreme cold at the north and south pole.

A greenhouse creates an artificial microclimate for growing plants especially in places where temperatures are generally cooler and the growing season is shorter. Clear glass or plastic allows sunlight to enter the greenhouse then traps its warmth inside. Earth's atmosphere acts in a similar way. Gases that make up the atmosphere allow sunlight to pass through. Some of this sunlight is absorbed by the earth and some reradiate back from the earth in the form of thermal radiation or heat. This heat is absorbed by the atoms of greenhouse gases in the atmosphere. Greenhouse gases include water vapor, carbon dioxide and methane. They provide the benefit of warming the earth enough for life to flourish. Without the greenhouse effect, Earth would be too cold to support life. However, an excessive amount of greenhouse gas can lead to an enhanced greenhouse effect. This can cause too much heat to be trapped in the atmosphere leading to global warming and climate change. The effects of this are increasing rapidly. Scientists predict global temperature may increase by as much as 4 degrees Celsius over the next century. Burning fossil fuels like coal, oil, and gas increase the concentration of carbon dioxide in the atmosphere. Raising livestock adds to the methane levels as well. Higher amounts of these greenhouse gases lead to the enhanced greenhouse effect. Converting to more renewable resources and practicing more sustainable agriculture can reduce this levels and maintain a more balanced greenhouse effect to keep Earth's atmosphere within the proper temperature range.

How Does the Tilt of the Earth Affect the Seasons?

Earth spins about an imaginary line drawn through its center called the axis, with a slight tilt rather than being completely vertical. It was mentioned earlier that this tilt impacts the amount of sunlight that hits the earth at different locations. How does the tilt of the Earth affect the seasons? The combination of this tilt and the planet's orbital path around the sun causes the change of seasons experienced on Earth.

In addition to the seasons, one may ask how can the length of day affect temperatures on earth or what is the average temperature on earth day and night. The diagram shows how the tilt causes part of Earth to receive more direct sunlight at different times of the year. This is why the amount of sunlight varies causing day length to vary as well with longer days during the summer. When the days are longer, temperature is also warmer for that region or hemisphere. As for average daily and nightly temperatures, there is no one average night or day temperature for the whole earth. Because of the rotation of the planet, day and night occurs at the same time on different parts of the planet. The overall average temperature on Earth is 61degrees F or 16 degrees C. Also, even though different parts of the planet receive different amounts of solar energy, the total amount of sunlight Earth received is the same overall.

Solar energy affects the Earth in many ways. Of course the sun provides light and warmth to the Earth but it also affects climate, weather, and seasons. Energy from the sun travels through the space and Earth's atmosphere. Some is absorbed by the Earth warming it directly. Some is radiated back off the earth into the atmosphere where it is trapped by greenhouse gases. This causes the greenhouse effect which makes Earth warm enough for living things to survive. Excess greenhouse gas can enhance this effect leading to global warming and climate change. This effect can be reduced by using less fossil fuels and more renewable resources like wind and solar power.

Because Earth is tilted on its axis, different parts of the Earth receive different amounts of sunlight. As Earth orbits the sun, the northern and southern hemispheres experience opposite seasons. The different seasons have varying temperature, precipitation, and day lengths. The hemisphere tilted toward the sun has its summer season with longer days and warmer weather while the other hemisphere has winter with shorter days and colder weather. The first day of summer or winter is called the solstice, and the first day of spring or fall is called the equinox. Although different parts of Earth experience different amounts of sunlight at different times, the total amount of solar energy Earth receives remains the same.

How does the Earth's tilt cause seasons?

Earth's tilt causes seasons by changing the amount of direct sunlight received in a certain region at different times of the year.

How does the Earth's tilt affect weather?

Temperature Ranges by Seasons and Climates

Climate Factors & Overview | What Are the Factors that Affect Climate?