What is the Solar System?

A solar system is a system of stars, planets, moons, and other objects, bound together by gravitational orbit. Let us first explain that our solar system includes one sun, eight planets, more than two hundred moons, as well as many other objects. Although the solar system definition might seem simple, understanding the components, the structure, and the formation of a solar system is no simple task. For the remainder of this lesson, we will focus on our own solar system, meaning the sun-planet-moon system in which we live. But keep in mind that we live in a galaxy with millions upon millions of undiscovered solar systems, many of which could be just like our own. 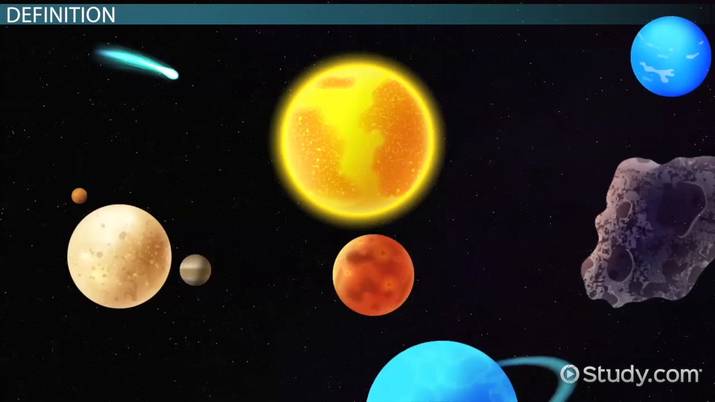 Try it now
Back
Coming up next: Mercury: Facts & Retrograde

Formation of the Solar System

By studying evidence found within our own solar system, as well as by observing other solar systems using telescopes, scientists have a widely-accepted hypothesis regarding how our own solar system was created. Scientists posit that about 4.5 billion years ago, a cloud of gas and dust in one of the spiral arms of the Milky Way galaxy began to spin and swirl, possibly due to the explosion of a nearby supernova. In the center of the swirl, gas and dust began to clump together, and as that clump grew, so did its gravity. Eventually, the clump grew so large, and the pressure from gravity grew so extreme, that the hydrogen atoms in the clump began to fuse into helium. Such fusion releases tremendous amounts of heat and light, and suddenly this clump of matter was no longer just a clump. It was a star, the star that today we call "the Sun."

According to scientists, our sun's gravity pulled in about 99% of the available matter in our solar system. But the remaining 1% was still swirling and spinning, trapped by the sun's gravity, and locked into orbit. This remaining matter began the same sort of clumping process, where matter clump's together, increasing its gravity, and thereby pulling in even more material. Some of these clumps grew so large that their own gravity naturally shaped them into spheres. These spheres, locked into orbit around our now-shining sun, became known as planets and moons. The smaller clumps, chunky and irregular, became known as asteroids and comets. Scientists refer to this formation process as the "nebular hypothesis."

What Does the Solar System Consist Of?

When someone asks "What does the solar system consist of?" they are usually referring to the most famous objects: the Sun, our moon, Jupiter and Saturn, etc. but to describe the solar system accurately means we must account for all objects, large and small, that live in our stellar neighborhood.

The Sun is, by far, the largest and most massive object in the solar system. But in truth, it is a rather average star. But calling it average shouldn't make it appear any less important. The sun is the primary provider of energy for the solar system and for planet Earth. It is classified as a GV star, also known as a yellow dwarf star. It has a diameter of 865,370 miles (1.4 billion km) and is located roughly 93 million miles from Earth. To give you an idea of its size, it would take about 109 Earths, stacked on top of each other, to add up to the Sun's diameter. It would take about 1.3 million Earths, stuffed inside the sun, to fill up the Sun's volume.

Our solar system has eight planets as well as many dwarf planets. The word "planet" comes from the Greek word planetes which means wanderer. The planets were originally thought to be wandering stars, lost in the night sky above, due to their ever-changing positions. The name stuck. Today, we know our solar system has eight planets and many dwarf planets. The planets are spherical objects with strong gravitational pulls that orbit our sun in regular intervals. The closest planet is Mercury, followed by Venus, Earth, Mars, Jupiter, Saturn, Uranus, and Neptune.

Objects that are smaller than planets are typically classified as either asteroids or comets. Asteroids are small, rocky bodies that orbit the sun. Comets are small objects made of ice and dust that orbit the sun. Because this ice tends to vaporize as comets orbit, comets have a characteristic tail, swept outward by the solar wind. In total, there are over 1 million known asteroids and roughly 3,700 known comets in our solar system.

Most of the solar system's asteroids and comets can be found in three distinct locations: the asteroid belt, the Kuiper belt, and the Oort cloud. The asteroid belt is a group of orbiting asteroids and comets in between Mars and Jupiter. The Kuiper belt is a similar group found beyond the orbit of Neptune. The Oort Cloud, on the other hand, is a far-off group (more shell-like than belt-like) composed of asteroids, comets, and other debris at the most distant edge of our solar system.

What Defines a Planet?

The scientific community has entertained much debate about what defines a planet. In the modern day, planets are defined as celestial objects that orbit a star, have enough mass and gravity to be spherical in shape, and occupy their own orbit that they have cleared of other bodies. This definition was formally defined in 2006 by the International Astronomical Union. The new definition left us with eight planets in our solar system: Mercury, Venus, Earth, Mars, Jupiter, Saturn, Uranus, and Neptune. Meanwhile, some smaller objects like Pluto, Eris, and Ceres lost their status as planets and became known as dwarf planets. In total, there are thought to be about 100 dwarf planets, most of which are orbiting on the icy edge of the solar system beyond Neptune.

Our solar system happens to be neatly organized into a group of inner planets and outer planets. Each group is separated by the asteroid belt and has four members with similar characteristics. The four inner planets are small and rocky: Mercury, Venus, Earth, and Mars. These are known as terrestrial planets because they contain terrain, meaning they have a solid, walkable surface. The four other planets are large and made of gases: Jupiter, Saturn, Uranus, and Neptune. These are known as the gas giants because of their size and composition. It is important to note that the gas giants are cloud-like. They are made of ingredients that would be gaseous on planet Earth, like hydrogen and methane. They have no solid surface, but they do vary in temperature, pressure, and density, such that landing a spaceship on a gas giant might be more akin to flying into quicksand rather than flying through a giant cloud.

The clarification of the definition of the term planet in 2006 meant that there were large objects, like Pluto for example, which were no longer classified as planets. Because of this, the International Astronomical Union created the category of dwarf planet. These include Pluto, Ceres, Makemake, Haumea, Eris, and the recently-discovered 2015 RR245, but there are expected to be at least dozens more orbiting in the Kuiper belt and beyond. Generally, these dwarf planets do not fit the definition for "planet" because they either do not have enough mass and gravity to be spherical, or they have not cleared their orbit of other celestial bodies.

Model of the Solar System

Altogether, the solar system is a complicated space. It is impossible to accurately describe the vastness of the system, the size differences between the objects, or the sheer number of objects in one image. Included is a simple diagram of some (but not all) of the key elements in the solar system.

In total, our solar system contains one star (the Sun), four terrestrial inner planets (Mercury, Venus, Earth, and Mars), and four outer gas giants (Jupiter, Saturn, Uranus, and Neptune). It also contains several dwarf planets (i.e. Pluto), thousands of comets, and over 1 million asteroids. Since 2006, the term "planet" has had a strict definition: it must orbit a star, have enough mass and gravity to be spherical in shape, and occupy its own orbit that it has cleared of other bodies. Our solar system also contains an asteroid belt between Mars and Jupiter, the Kuiper belt beyond Neptune, and the distant Oort cloud at the far reaches of the solar system.

What is the solar system easy definition?

What is the solar system for kids?

The solar system includes the Sun, the Earth, and the moon, along with seven other planets and more than 200 other moons.

Facts About the Solar System: Lesson for Kids

Facts About the Solar System: Lesson for Kids