Copyright
Peter M. Williams, Nicola McDougal
Learn about gas solubility. Identify how pressure and temperature affect solubility of a gas, and see some applications of the solubility of gas in liquid. Updated: 02/18/2022

What Is Gas Solubility?

Therefore, any substance that dissolves in a solvent is said to be soluble. Insoluble substances do not dissolve in a solvent to form a solution. In addition, the amount of solute present in a given solvent or solution is termed as a concentration of a solution. A solution is said to be saturated when it can longer dissolve more of the solute, i.e., contains the maximum of the solute.

Examples of Gases that Dissolve in Water 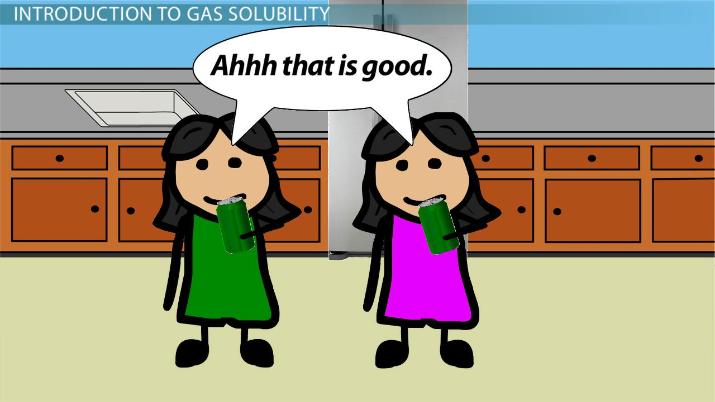 Coming up next: Chemical Reactions and Balancing Chemical Equations

How Does Pressure Affect the Solubility of a Gas?

Examples of How Pressure Affects Solubility

How Does Temperature Affect the Solubility of a Gas?

An increase in temperature decreases the solubility of a gas in a liquid. This can be explained using Le Chatelier's principle. This principle states that if the normal state of a system/reaction is disturbed by a variable such as a temperature, the system/reaction responds by adjusting its composition to counteract/act against the change of that variable. Therefore, a reaction that releases heat (exothermic) will cause the solubility of gas to decrease since the temperature will be rising.

Examples of How Temperature Affects Solubility

In addition, discharge of hot water into water bodies raises the water temperature thus reducing the solubility of oxygen gas. This makes the dissolved oxygen in water becomes scarce thus negatively affecting the aquatic life. Generally, an increase in temperature always reduces the solubility rate of gases in liquid. This can be illustrated in Figure 2.

Applications of the Solubility of Gas in Liquid

The aspect of gas solubility in liquid has been widely employed in the industrial world. For instance, carbon dioxide has been utilized in soft drinks manufacturing. This gas gives a sparkling effect to the soft drink. Also, carbon dioxide keeps the drink fresh and free from microbes.

In addition, helium and oxygen gas have been utilized to make scuba tanks. Scuba tanks contain a mixture of helium and oxygen used by divers while underwater, where the pressure is very high. The solubility of helium is much lesser in blood, and thus the divers may experience fewer complications (fewer gas bubbles in their bloodstream) once they emerge on the water surface, where the pressure is much less.

An increase in the solubility of carbon dioxide in the atmosphere into the ocean water leads to ocean acidification. This increases acidity levels in the ocean. It is due to the formation of weak carbonic acid when carbon dioxide dissolves in water. Ocean acidification reduces the carbonate ions, which are highly utilized by aquatic organisms in making their shells, e.g., oysters.

Any substance that dissolves in a liquid is known as a solute. The liquid into which a solute dissolve is referred to as a solvent. A mixture of a solute and a solvent forms a solution. Any substance that dissolves in a solvent is said to be soluble, while the one that does not; insoluble. The amount of solute present in a given solvent or solution is termed a concentration of a solution. A solution is said to be saturated when it can longer dissolve more of the solute. The ability of a solute to mix and form a solution with a solvent is termed as solubility. Therefore, gas solubility can be defined as the ability of gas to dissolve in a solvent (liquid) to form a solution at a specific temperature. Examples of gases that dissolve in water are carbon dioxide, ammonia, chlorine, and oxygen.

How do we determine the solubility of gasses in water?

Why does gas solubility decrease with temperature?

Osmosis Process & Examples | What Is Osmosis?