Copyright
Yash Solanki, Nissa Garcia, Dawn Mills
What is a solution in science? Learn how solutions are formed and see solution examples. Learn about the different types of solutions: solid, liquid and gas. Updated: 06/01/2021

What is a solution in science? A solution, in science, refers to a type of mixture involving two or more substances. Specifically, the solution definition refers to a type of homogeneous mixture - i.e., a mixture that has a uniform composition and its individual components cannot be distinguished. This is different from a heterogeneous mixture, in which individual components can be visually identified.

Solutions generally refer to liquid mixtures, but can also involve mixtures of gases or solids. Creating a solution requires two components - a solvent and a solute. The solvent is the medium into which other substances will be dissolved, and usually makes up a greater percentage of the mixture. The solute is the substance (or substances) that will be dissolved into the solvent. For example, if you mixed a solution of 70% ethanol and 30% water, the ethanol would be the solvent and the water would be the solute. If you dissolve some table salt in a glass of water, the water will be acting as the solvent, while the salt is a solute. The salt water that is created is a solution. 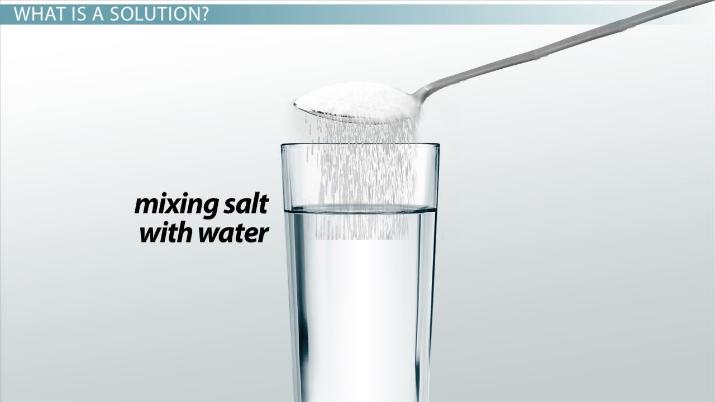 There are many examples of solutions that we encounter, or create, in our day-to-day lives. Some solution examples include:

The key factor that differentiates a solution from many other types of mixtures is that it is a homogeneous mixture. Take soda, for example. Its individual components, such as the sugar or the flavorings, cannot be easily identified. It simply appears as a uniform liquid, which is what classifies it as a homogeneous mixture.

Based on the state of matter of the solvent and solute in a solution, it can be classified as one of multiple types. For example, a solid/solid solution would involve a mixture of two or more solid compounds into a solution, while liquid/gas solutions would involve mixing a gas and a liquid (two different states of matter) to make a solution. Let us examine these different types of solutions, and discuss some well-known examples of each type.

Solid solutions generally involve melting two or more solids at high temperatures, mixing, and then letting them cool and solidify. Examples of solid solutions include:

Liquid solutions involve a mixture of two or more miscible liquids (i.e., liquids that can dissolve in one another). Examples include:

Gas solutions involve a mixture of two or more substances in the gaseous state. Examples include:

Apart from solutions where both the solute and solvent were of the same state of matter (solids, liquids, or gases), there exist many solutions that involve mixing compounds that exist in different states of matter. Examples of these types of solutions are:

A solution is a homogenous mixture consisting of one or more solutes dissolved into a solvent. Some common examples of solutions include:

These are all homogenous because we cannot visibly differentiate their individual components. When an ionic compound is dissolved in a solvent, it dissociates into cations and anions. Based on the state of matter of the solute and solvent, a solution can be classified as:

Mixtures that are not homogenous are called heterogenous mixtures. If a heterogeneous mixture separates into individual layers over time it is a suspension (e.g., sand mixed in water); if it does not separate it is a colloid (e.g., milk).

As previously learned, solutions are homogeneous, or equal throughout, and contain a solute and solvent. As a reminder, the solute is present in less amount than the solvent. Solutions are found in our everyday life and can be prepare din laboratory settings for scientific experiments.

1. Jack was preparing his morning coffee. He adds hot water to coffee round to extract a liquid from the grounds containing caffeine and other relevant compounds. Jack adds sugar to his coffee which full dissolves and makes it sweeter to taste. Is his cup of coffee considered a solution?

3. Jane is drinking a root beer soda. Is she drinking a solution? If so, what is the solute and solvent?

4. Janet added some olive oil to a cup of water. Is this considered a solution? Why or why not?

1. Yes, his coffee is a homogeneous solution since the sugar is dissolved in the coffee.

2. The solvent is water as it is present in the largest amounts picking up trace components as it passes through the coffee grounds. The solute is sugar as it is dissolved in a small amount within the solvent.

4. No it is not a solution. Oil and water are not miscible, therefore the mixture would not be homogeneous.

What are some common examples of solutions?

There are many examples of solutions that we encounter, or create, in our day-to-day lives. Some solution examples include:

Whats the definition of solution?

The solution definition refers to a type of homogeneous mixture - i.e., a mixture of two or more substances that has a uniform composition and you cannot make out its individual components.

What is a Solution in Science? | Examples of Solutions in Chemistry
Related Study Materials

What is a Solvent? | Solvent Examples & Types

Annular Eclipse: The Changing Size of the Moon

Mixtures | Examples of Mixtures in Chemistry