In this lesson, we will address the question 'what is sovereignty?' To state it briefly, sovereignty is the concept for the highest, independent power in a given territory. Stroud's Judicial Dictionary defines sovereignty as a form of government that has administrative control of a state and has not been subordinated to another state. Or in other words, a sovereign state is one that has its own mode of self-control; it is not under the control of another power, and it is not out of control. Moreover, the idea of sovereign authority is supreme within a given territory. So while individuals and organizations, for instance, a social club, may be able to make their own rules, they are not sovereign if there is some source that has more authority to overrule their proceedings.

Carl Schmitt makes the claim that all political concepts are essentially secularized theological concepts. As such, sovereignty, when applied to a state, is actually derived from theological thought, namely, the thought of a supreme organizing power. Etymologically, the concept of sovereignty seems to follow Schmitt's maxim about the theological origins of political concepts. The term stems from the Latin word superanus, meaning whatever relates or pertains to that which is super-, meaning that which is over. The Latin term is further reflected in the French souveraineté, which means much the same. At its core, the term indicates supremacy or 'highest power.'

In medieval thought, the theory of sovereignty relates to a notion of the king's two bodies. In one regard, the king is possessed of a physical body that carries on normal biological functions; it differs little from the bodies of other particular people. But the king, as the living embodiment of the head of state, is also invested with significant powers to command others and shape the behaviors of other bodies within his demesne. This second notion of 'body' was not about the particular person who happened to be king, it was about a kind of social organization around an office. So while a particular king might die, a new one would take his place. Thusly, the office of the king was enduring, and it is from this notion that we are familiar with the phrase, 'the king is dead, long live the king.'

In the 16th century, Jean Bodin further developed the concept of authority, associating it with the Latin term majestas. This transformation is important because Bodin clearly defines the highest power in terms of command. Even his notion of statutes, meaning general laws, is understood in terms of what the sovereign ruler commands. Consequently, to live within the commonwealth is to be obliged to obey the sovereign. Carl Schmitt built on that definition in the context of democracy. He takes democracy, as sovereign rule by the people, not to be a matter of electing an official but of deciding matters directly. Thus, if a people are to be sovereign, they need to vote on issues directly in the form of a referendum or plebiscite. Schmitt advocates for such a direct act of control by the people because he thinks that elected, parliamentary officials make decisions by private committee and do not answer to their constituents. 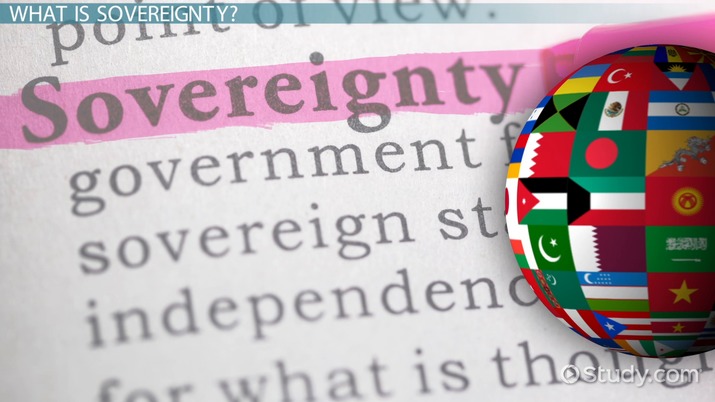 Titular sovereignty refers to an office that has supreme authority in name only. In the actual function of exercising power, such an office is a mere figurehead or symbol without being able to issue commands. Arguably, the British monarch is a titular sovereign, since much of the activity of ruling the state is carried out by parliament and the prime minister.

Legal sovereignty refers to the highest legal power. Such a power is generally well-defined, constitutionally speaking, and often involves a separation of making the laws and enforcing the laws. The United States Congress, for instance, is the legal sovereign when it comes to making laws and the office of the President is the highest executive authority. Nevertheless, the President is at least somewhat subordinated to Congress since the President is bound to obey the laws passed by Congress. Individual states within the US may have their own legislatures, but they are not sovereign since they cannot contradict or disobey the national Congress. Again, the concept of sovereignty picks out what the highest power is.

Political sovereignty is more opaque and refers to whoever exercises the highest influence or control. Ideally, in a democracy, the people as a whole are the political sovereign insofar as they can influence the laws and governments without being directly empowered to make or enforce the laws. In a hereditary monarchy, a family would be the political sovereign, even if they have to interact with their ministers and parliaments in day-to-day ruling. In sum, the legal sovereign is the well-defined office that directly controls the concrete reality of the law, whereas the political sovereign is the indirect power that vaguely influences or impacts the law. In part because of this separation, there can be a breakdown in the functioning of law. For instance, when the US passed prohibition laws, this was an exercise of legal sovereignty but did not reflect the will of the people, which ideally would be politically sovereign. The result was widespread criminality and eventually the repeal of the law.

De jure sovereignty refers to sovereignty in principle or by law. Essentially, an office or institution is de jure sovereign when it has a rightful claim to exercising the highest authority within a territory and that claim is recognized as legitimate. The constitution of the United States, for instance, explicitly ascribes the highest law-making power to Congress. Given the constitutional right and the general acceptance by the constituency of this right, Congress is the de jure legal sovereign. De jure sovereignty requires the respect of the people for its government, control over the military and police, and general legal control over the territory. The main point here is that the right to rule is spelled out and accepted, thus establishing a stable relationship between the ruling sovereign and its subjects.

De facto sovereignty refers to sovereignty in actual practice. It is less a matter of having a rightful claim to sovereignty and more of a matter of having the capacity to exercise the highest power. A group of people may draft a document making a claim to having a sovereign government, but if they lack the resources to enforce the laws, defend against invaders, and coordinate their activities, then they cannot be the de facto sovereign. In a somewhat different example, if very wealthy citizens exert unequal influence over government, then they are the de jure political sovereign even if the people as a whole is the de jure political sovereign. A sign of de facto sovereignty is if the government has the power to trade and control markets. Without this power, the government simply lacks the capacity to carry on administration. The final point here is that de fact sovereignty refers to actual influence and not simply a claim to having authority. In order for a state to be fully recognized as sovereign, it must have both de jure as well as de facto sovereignty.

While the history of the concept of sovereignty is heavily indebted to thinking about monarchy, there is nevertheless a notion of popular sovereignty that we have available. In this version of the concept, the people as a whole are meant to influence the functioning of the state, generally by performing the highest functions of decision-making (such as appointing and removing government officials). Jean Jacques Rousseau is perhaps the most influential thinker of popular sovereignty, not because he proposed that the people as a whole directly vote on issues, but because he thought the general will of the people was the basis of rightful authority.

Popular sovereignty suffers from the problem of not being unitary. Given that members of a people will disagree, it seems like it is impossible to have any decision reflect the will of each member of the people. Various attempts have been made to solve this issue, including Locke claiming that everyone wills to obey the majority. Thus, while there is disagreement on particular issues about government, there is higher order, universal agreement on consenting to the decisions of the majority. Locke thinks that without this notion of majority rule, there could be no sovereign that has popular consent.

Sovereignty contains a notion of independence, but it is not reducible to it. That is, sovereignty is the concept of the highest power, meaning that there is no higher power on which the sovereign is dependent. This lack of dependence makes it, by definition, independent. But the sovereign is also capable of carrying on the work of self-government within some set boundaries. There may be territories that are independent--not beholding to higher external powers--but are not sovereign. In such a case, these territories would be anarchic, meaning without rule. Sometimes we use the idiom of 'the wild west' to refer to some sphere or area in which there is no governing authority. Such a sphere would involve people acting independently, but none of them would be sovereign since they would not have any claim to territorial authority.

What does sovereign mean?

"Sovereign" is the designation for the highest authority within a given territory, supposing that such an authority is not beholden to an external territory. The ideal realization of this concept requires recognition both within the boundaries of the territory, i.e., the subjects to the sovereign recognize its legitimacy, and from external powers as well.

Sovereignty and freedom are not identical terms, in part because of the multiple meanings of freedom. Freedom can mean self-determination, it can also mean 'freedom from', meaning a kind of independence. Neither definition makes a claim to supremacy, and freedom can apply to individuals and collectives. Sovereignty, however, refers only to a supreme power of self-determination and independence in reference to a government.

Using Spatial Concepts to Understand the Human Organization of Space

Sovereignty in Government | What is a Sovereign Nation?

Westphalia and Peace of Augsburg: States' Rise to Sovereignty and Decline of the Empire

Types of Legitimacy in Government