Dinah McAlister, Erika Steele
Find out what a spirochete is and spirochete bacteria examples. Learn the function of spirochetes’ axial filaments and endoflagella. Read about spirochetemia. Updated: 02/21/2022

What is a Spirochete? 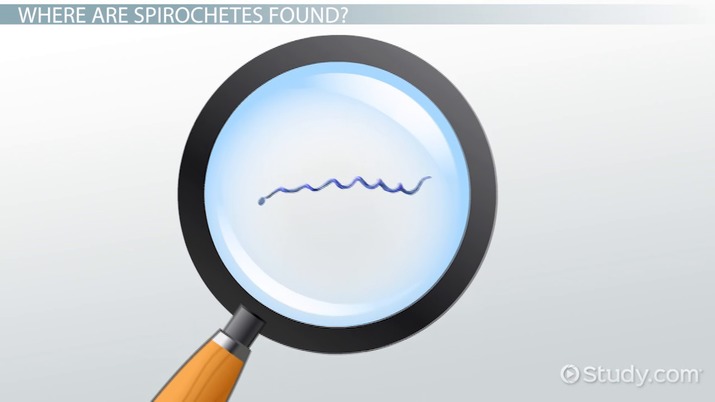 Coming up next: Aminoglycosides: List of Examples, Toxicity & Side Effects

Endoflagella are bundles of flagella called axial filaments that wrap around the cell body of spirochetes. The axial filaments cause the bundles of flagella to rotate to help the spirochete move in a twisting motion. The term endoflagella has the prefix 'endo' which means inside, and flagella in bacteria are used for movement of the cell, so endoflagella are flagella enclosed inside a membrane that help the spirochete move. Flagella have many functions, the most common being movement. They are also sensory and can depict changes in pH and temperature. Flagella (singular flagellum), meaning whip, are long whip-like structures that resemble long hair that propel the cell through a liquid medium. Although several species of prokaryotes have flagella, flagella can also be found in other types of cells such as human sperm cells. The endoflagella and axial filament are specific to spirochetes and the presence of these structures determines spirochete classification.

Spirochetemia is the presence of spirochetes in the blood. An example of spirochetemia is caused by the spirochete Leptospira interrogans which gives rise to leptospirosis. Leptospirosis is usually a mild disease characterized by fever, myalgia (muscle pain) and headache, but if left to progress, can lead to liver or kidney failure. Letospirosis has several reservoir hosts, but the most common is the brown rat. Treatment can include antibiotics, but human immune response can usually clear the infection.

The three main families that include parasitic spirochetes are Treponema, Leptospira and Borrelia. Most spirochetes are associated with a host cell and can be mutualistic (beneficial) or parasitic. Mutualism is a type of symbiotic relationship in which both organisms benefit from the relationship. Syphilis is caused by the spirochete Treponema pallidum and is a sexually transmitted disease in humans. Lyme disease is caused by the spirochete Borrelia burgdorferi and is passed to humans through a tick bite. Relapsing fever is caused by the Borrelia species of spirochetes, and that causes several episodes of fever. Leptospirosis is caused by Leptospiraceae interrogans and is characterized by flu-like symptoms. Spirochetemia, the presence of spirochetes in the blood, can also lead to leptospirosis. Yaws is caused by Treponema pallidum and is a skin infection that causes lumps and ulcers, most commonly in children.

Is a spirochete parasitic or beneficial?

What is the name of the condition when spirochetes are found in the blood?

Where do spirochetes live?

Spirochetes live in a variety of organisms. If they are found in humans, they cause diseases and form a parasitic relationship. Spirochetes can also live in ticks, lice, mussels, termites and oysters. These are mutualistic relationships because both organisms benefit.

What diseases can spirochetes cause?

Spirochetes cause diseases such as syphilis, Lyme disease, leptospirosis and yaws. Syphilis is sexually transmitted in humans. Lyme disease is caused by a bite from a tick. Leptospirosis is transmitted by the brown rat. Yaws is characterized by lumps and ulcers, most commonly in children.

Where are spirochetes found?

What is the meaning of spirochete?

Create an account
Spirochete Overview & Examples | What is a Spirochete?
Start today. Try it now
Microbiology: Help and Review

Spirochete Overview & Examples | What is a Spirochete?
Related Study Materials

Glycocalyx Function & Structure | What is Glycocalyx?

Mucor Overview & Examples | What is Mucor?