What is static friction? Static friction is the force between two surfaces that keeps them from moving relative to one another. You can get an intuitive sense from everyday experiences like trying to slide a box across a floor and noticing that you have to push it with a certain force before it starts moving. The force pushing against you is the static friction force.

It's also fairly intuitive to understand that this force gets larger for more massive objects. The heavier things are, the more force is required to set them into motion. Also, different types of surfaces have different strengths or forces of friction, like rubber on the pavement in comparison to a metal ice skate blade on ice. Therefore, it can be stated that the frictional force is a function of the weight of an object and different types of materials that are in contact with each other.

As noted above, the interaction between the different materials is what causes the static friction force. But what does that really mean?

To better understand this phenomenon, the notion of static friction needs to be broken down into two types of interactions. 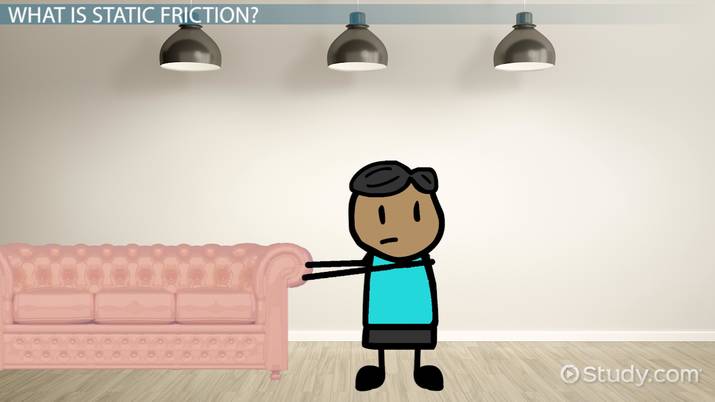 Let's look at a simple example to illustrate how our definition above can be stated mathematically, and we'll show how to find the static friction formula.

According to Newton's First Law, if two things are not in relative motion, then the sum of the forces is equal to zero.

Let's take a look at Figure 1, which illustrates a person trying to push a large bass speaker cabinet across a floor. The inset shows a free-body diagram with the forces in the x and y directions according to the coordinate system in the upper left-hand corner.

From the free-body diagram, we can write Newton's Laws for both directions as:

We're investigating the frictional force FFriction that keeps the speaker cabinet from moving across the floor, which shows up in the 'Fx ' equation. So, what is the static friction formula that tells us what the force is?

As we noted previously, the frictional force FFriction is a function of the weight and the materials that the masses are made of.

If we look at the second equation above, we can see the weight is equal to the Normal force FNormal.

So, we can see that FFriction is proportional to FNormal multiplied by some constant that represents the amount of static friction there is between different surfaces and write

where {eq}\mu_{s} {/eq} is the proportionality constant representing the materials and is called the coefficient of static friction.

Let's look at a 2-D situation of a block on an inclined plane where gravity is pulling the box down, but the static friction force keeps it from moving.

As we can see from the diagram, the force of gravity can only act on the inclined plane, so we only take the component of the force of gravity along the inclined plane, which is given by Fg,x = mgsin{eq}\theta {/eq}. It is evident from the diagram that the frictional force opposes this motion and is equal in magnitude, but opposite in direction. to Fg,x. Also, FNormal is equal and opposite to Fg,y, which is equal to mgcos{eq}\theta {/eq}.

This gives the frictional force for an object on an inclined plane as:

As we just showed, the coefficient of static friction represents a constant that shows the relative friction between two materials. The values for {eq}\mu_{s} {/eq} have been thoroughly studied and tabulated and looked up in a reference table (a sample table is shown below). If we take the static friction equation above, we can simply rearrange it for {eq}\mu_{s} {/eq} to get:

Notice that {eq}\mu_{s} {/eq} is the ratio of two forces, so it is a dimensionless constant!

To further refine our understanding of static and kinetic friction, let's consider the situation of something rolling across a flat surface and take a look at the forces.

We have already seen a few examples of static friction, but let's list a few more to expand our purview on the subject:

In this lesson, we took a qualitative and quantitative look at the nature of the static friction force:

The Normal Force: Definition and Examples

What is Friction? - Definition, Formula & Forces

What is Normal Force? - Lesson for Kids

The Effect of Friction on Accelerating Objects: Physics Lab