Copyright
Lisa Stewart, Greg Chin
Stages of Mitosis. Learn about the steps of mitosis, including what occurs in the cell at each stage and the main differences between mitosis and meiosis. Updated: 07/07/2021

The Stages of Mitosis: Overview

Mitosis is the process of cell division which ultimately results in two genetically identical daughter cells that have the same number of chromosomes. Mitosis occurs in all of an organism's body cells, also known as somatic cells.

Mitosis consists of five phases. The following lists the phases in the correct order:

Mitosis is essential for organism growth and replacement of damaged and worn out cells. In single-celled organisms such as yeast, mitosis is a form of asexual reproduction and will add new individuals to a population.

It is important to note that Interphase and Cytokinesis are not on this list. Interphase is the stage that occurs before mitosis and is the part of the cell cycle that includes cell growth and replication of DNA. The cell is in interphase 90% of the time, making it the most prevalent stage at any one time. Cytokinesis is the division of the cytoplasm that begins during anaphase and ends after telophase. Cytokinesis results in the formation of two separate daughter cells. This lesson will focus specifically on the five phases of mitosis. 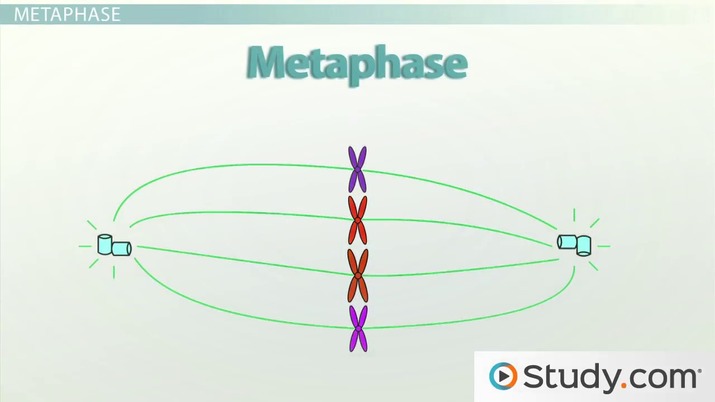 Coming up next: Cytokinesis: Animal Versus Plant Cells

The Sequence of Mitosis

Mitosis occurs in five stages that are in a specific order. In the following sections, there is a description of what occurs at each stage.

Prior to this point in the cell cycle, the cell has grown and DNA has been replicated during interphase. In Interphase, the DNA is in an uncoiled form called chromatin. However, once it reaches prophase, the DNA begins to condense into chromosomes. The prefix 'pro' means before in Greek.

The following list summarizes what happens to the cell during early prophase:

This phase has also been referred to as late prophase. This prefixes 'pro' and 'meta' in this phase mean before the middle, making it a precursor to metaphase. The following occurs during prometaphase:

The third stage of mitosis is called metaphase. During this phase, the chromosomes are aligned in the middle of the cell. Due to the fact that they are fully visible at this point, many scientists will study a map of an organisms chromosomes called a karyotype. The following occurs during this phase:

The fourth stage of mitosis is called Anaphase. The purpose of this stage is to separate the chromosomes, allowing each cell to have an identical set of chromosomes at the end of the cycle. The following occurs during this phase:

The fifth stage of mitosis is telophase. The purpose of this phase is to finalize the process of mitosis and create two genetically identical daughter cells. The following occurs during this phase

The Difference Between Mitosis and Meiosis

Mitosis and meiosis are both processes that involve cell division. However, mitosis is involved in cell division of body cells or somatic cells that are genetically identical, whereas meiosis is the process that creates genetically different gametes (sperm and egg cells). While they do produce different types of cells, they both occur after interphase, which is where cell growth and DNA replication occur. They also both finish the cell cycle by splitting the cells via cytokinesis. The main similarities and difference between mitosis and meiosis are outlined in the following table:

Mitosis is the process of cell division that creates two genetically identical daughter cells. Mitosis is important because it allows for growth and repair of damaged or worn-out cells. The five phases of mitosis are in the following order:

During each stage of mitosis, the cell undergoes certain changes that occur within a specific order. The following list briefly summarizes what happens at each stage:

The main difference between mitosis and meiosis is the following: mitosis is involved in duplicating body cells, whereas meiosis creates genetically different gametes.

What are the six stages of mitosis in order?

There are actually 4 main stages of mitosis and they are in the following order: prophase, metaphase, anaphase, and telophase. Sometimes, there is a 5th stage mentioned after prophase called prometaphase. Interphase and cytokinesis are part of the cell cycle, but are not included in the stages of mitosis.

What are the 4 phases of mitosis and what happens in each?

The 4 phases of mitosis are in the following order: Prophase, Metaphase, Anaphase and Telophase. In some academic texts, there are 5 phases that include prometaphase as a late prophase stage. During prophase, the nucleolus disappears, chromatin condenses into chromosomes, centrosomes separate, and a mitotic spindle forms. During metaphase, the chromosomes line up in the middle of the cell. During Anaphase, the chromosomes are pulled apart to opposite sides of the cell. In Telophase, a new nuclear envelope forms, chromosomes decondense into chromatin, and the nucleoli reappear

Mitosis Phases in Order | What Are the Stages of Mitosis?
Related Study Materials

Metaphase I | Stages of Meiosis

Protein Synthesis in the Cell and the Central Dogma

What is a Projectile? | Projectile Motion, Diagram & Examples

Cytoplasm Function & Role | What is Cytoplasm?