Copyright
Sasha Blakeley, Amy Troolin
Learn about the storming of the Bastille, a Bastille definition, and the Great Fear. See why the Bastille was stormed and its significance in France today. Updated: 07/23/2021

The Bastille and Its Symbolism

What was the Bastille? The Bastille was a large fortress-like prison that was primarily used to house political prisoners in France in the years leading up to the French Revolution. It was located in Paris, but it is no longer standing. Construction on the medieval fortress began in 1370 because it was thought that Paris needed a better structure to defend itself from outside attacks. The structure was completed in 1382. Under King Louis XIII, the fortress was converted into a prison for upper-class members of society. By 1789, Parisians were thoroughly disillusioned by the harsh class system in France. The Bastille was regarded as a symbol of the absolute monarchy, its corruption, and its tyrannical reign over the French people. This was partly due to its imposing physical appearance and partly because prisoners in the Bastille were usually there for political reasons, including opposing the government, nobility, or monarchy. 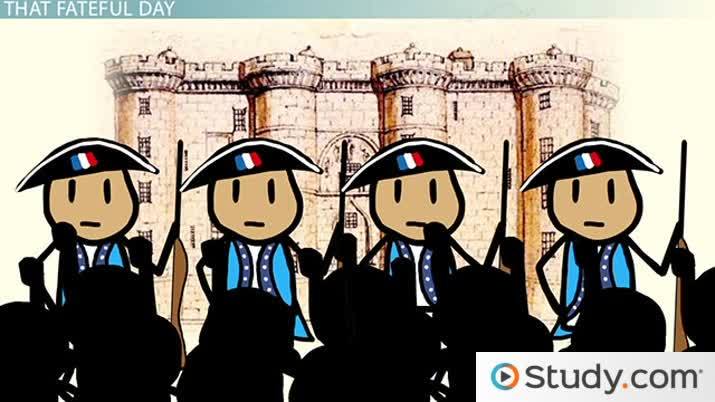 Coming up next: The Constitutional Monarchy: Declaration of the Rights of Man and Citizen & the Civil Constitution

In 1789, France was a highly stratified society. The poor had long been dealing with food shortages, while the wealthy monarchs and nobles lived in lavish palaces. King Louis XVI had amassed huge debts that he was trying to repay through heightened taxes. Another element that made Parisians angry was the dismissal of Jacques Necker, who was a popular minister who many people felt represented their interests.

France's parliament, the Estates-General, convened for the first time in many years to try and manage the country's problems. This parliament consisted of three groups: the nobility, the clergy, and the common people, who were known as the Third Estate. The Estates-General struggled to reach a conclusion, so members of the Third Estate created the National Assembly. This was a revolutionary form of government that existed in June and July of 1789.

To deal with increasing unrest among the people, King Louis XVI stationed troops in Paris. Rather than calming tensions, this action made people more uneasy and more prepared to rebel. While the King's legal recognition of the National Assembly was taken as a victory for the people, the dismissal of Necker and all of the other challenging factors created an environment ripe for violence. Protests, riots, and mobs started to break out around Paris, many of which were met with violent suppression by the king's forces. To answer the question, ''why was the Bastille stormed?'', one need only look at the environment in which people were living to understand their frustrations with such a massive symbol of oppression in their city.

The Storming of the Bastille

What was the storming of the Bastille? A simple storming of the Bastille summary is that the prison was attacked and overtaken by protestors at the start of the French Revolution. In July of 1789, the man in charge of the Bastille was Bernard-René Jordan de Launay. Concerned by the increasing violence in Paris, he sought to fortify the prison. He asked for, and received, reinforcements and 250 barrels of gunpowder. Even with this help, he worried that he would not have enough forces to defend against a violent group of protestors. Angry members of the public saw this reinforcement of the prison as an indication that the prison would make a good target.

When was the storming of the Bastille? On the morning of July 14th, 1789, a large group of protestors carrying guns, knives, and a variety of handmade weapons gathered outside of the Bastille. Launay tried to the dispel tension and negotiate with the protestors. In so doing, he made several mistakes. First, he told the protestors that if they remained peaceful, he and his men would hold their fire. This only served to anger the crowd further. Next, he tried to broker peace by showing the protestors that his cannons were not loaded. All this did was embolden the protestors and make them feel more confident that their attack was likely to succeed. Members of the crowd surged over the prison's outer wall and opened the drawbridge, allowing the others to enter and start storming the prison.

As the riot was beginning, a group of defectors from the French Army arrived to join the crowd. They brought cannons with them, quickly making it clear that Launay would not be able to maintain his position. Launay considered his options: he did not have the men or resources to hold the prison, which only had seven prisoners at the time in any case. He chose to surrender, hoping that the crowd would be merciful toward him. The crowd seized Launay and his men, quickly overwhelmed the Bastille, freed the prisoners, and went out into the streets of Paris. Chaos reigned and Launay realized his mistake too late. He was executed by the people, along with his men. The storming of the Bastille marked the beginning of a massive political change: the French Revolution had begun.

Today, July 14th is a national holiday in France. It is commonly known as Bastille Day. It is a celebration of the French Revolution and the spirit of the French people. In Paris, common forms of celebration include military parades, speeches, and fireworks. The day is associated with French patriotism and a celebration of the revolutionary ideals of liberty, equality, and brotherhood (liberté, égalité, fraternité). Gatherings of family and friends are also common on Bastille Day.

What was the Great Fear? The Great Fear, called La Grande Peur in French, was a period immediately following the storming of the Bastille. It was a time when members of the nobility began to fear for their lives because of the popular uprisings that were spreading rapidly across France. The peasants had a number of grievances against nobles (called seigneurs) and especially landlords. They felt that members of the nobility profited far too much from the labor of the poor, many of whom struggled even to get enough food. The Great Fear did not last for the entire French Revolution; it was most prominent only between July 22nd and August 6th, 1789. After this time, the National Assembly abolished the seigneurial system, resulting in a reduction of violence.

While the Great Fear often refers to the fear experienced by members of the nobility, the term is sometimes also used to refer to the fears of peasant communities throughout France at the same time. Peasants throughout the country were afraid because the king had mobilized troops in Paris. They worried that aristocrats would stage a counter-revolution that would bring violence to peasant communities. Peasant militias aiming to attack members of the nobility were formed to deal with this paranoia, often stoking the parallel fears of the nobles. The cycle of fear, panic, and paranoia among the classes became self-reinforcing before the violence waned.

Despite the end of the Great Fear, the French Revolution was far from over. Violence against members of the nobility did not disappear entirely: the French Revolution continued for around ten years, during which time many members of the nobility were executed or stripped of their lands. Others fled the country. It is important to note that despite their similar names, the Great Fear is not to be confused with the later Reign of Terror, which was a period of time during which around 15,000 people, and more by some estimates, were executed by guillotine.

The Bastille was a large medieval fortress that functioned as a prison in Paris in 1789. It had become a symbol of all that the French resented about their country and their government: corruption in the nobility, a tyrannical monarchy, and huge class inequality. Many factors led to the storming of the Bastille on July 14th, 1789, including:

Prior to the storming of the Bastille, France had convened its parliament, called the Estates-General. This was a group comprised of the clergy, the nobility, and the Third Estate, or common people. At this time, the revolutionary National Assembly was also created.

Violence was brewing, however, and Bernard-René Jordan de Launay, head of the Bastille, was faced with a mob. He chose to try and defend the Bastille against the crowd, which ultimately cost him his life. He also showed protestors that his cannons were not loaded, which emboldened them to attack the prison. Immediately following the storming of the Bastille, France experienced a period called the Great Fear, where peasants and nobles alike worried about increasing political strife and violence.

What did the great fear and the reign of terror have in common?

The Great Fear and the Reign of Terror were both chaotic times in the French Revolution. They were both characterized by panic and paranoia, though the reasons for these feelings were different in each case.

Why is the storming of the Bastille an important day for France?

The storming of the Bastille is still celebrated in France for several reasons. It is a commemoration of an important day in French history, a celebration of the values of the Revolution, and a day for France to be patriotic.

Storming of the Bastille & the Great Fear
Related Study Materials

Assembly of Notables and the Estates General

American Imperialism Around the Globe

Napoleon Bonaparte and the Battle of Waterloo

The Creation of Prussia: History & Timeline

Denis Diderot and the Encyclopedia