What is a Strike-Slip Fault? 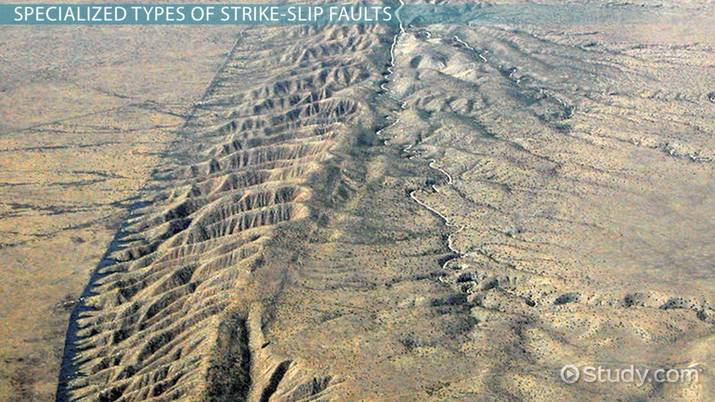 Coming up next: Mountain Ranges in India: Names & Regions

As mentioned above, a strike-slip fault includes two blocks of rock that slide in opposite directions past one another. Due to the jagged nature of the large pieces of rock, the rough edges may prevent the blocks from moving, causing extreme amounts of tension and energy build-up. Eventually, the rocks slip and move past one another, releasing this large build-up of energy, a phenomenon that causes earthquakes to occur. The release of energy and tension, comes out in the form of seismic waves that shake the ground near the fault. Earthquakes can be mild if the amount of energy released is small, but can also be extremely destructive if the amount of energy released is large.

There are three different types of strike slip faults that can occur. These include:

What causes a strike-slip fault to form?

A strike-slip fault forms as a result of shearing stress. This stress forces two blocks of rock to move in opposite directions past one another.

What is an example of a strike-slip fault?

What is a strike-slip fault?

A strike slip fault is a break in earth's crust where two blocks of rock slide past one another. This is the result of a type of stress known as shearing stress.