What Is the Sublime Painting Aesthetic?

What is the sublime as it is used in art? The concept of the sublime is essential to understand when studying 19th century art and literature. Essentially, the concept of the sublime blends beauty with terror. Something sublime is so great and awe-inspiring that it is frightening and wonderful at once. Sublime aesthetics, especially sublime painting, seek to capture this feeling and express it visually, just as Romantic poets sought to express the sublime in words. The sublime is inextricably connected with Romanticism as an artistic movement. Romanticism, both in art and literature, was concerned with expressing powerful emotions, exploring the imagination, and dismantling the standard conventions of art. 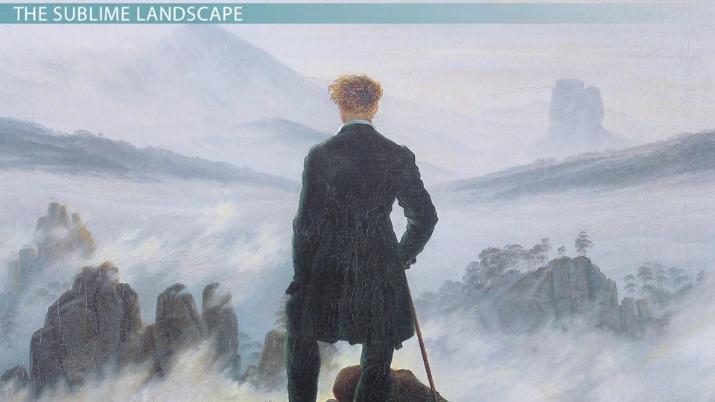 Coming up next: Comparing Romantic Painting in Europe & America

Theorizing Sublime Art and the Advancement of the Romantic Aesthetic

Sublime Romanticism and a commonly understood sublime art definition were developed over time by several different theorists who were analyzing the artwork that was being created. Ultimately, Romanticism and the exploration of the sublime was a reaction against Enlightenment-era rationalism that prioritized logic over emotion. It was an attempt to recapture the sacred in modern life, much of which seemed to have been lost as a result of rationalism and empiricism that was permeating philosophy and art.

In the 1st century CE, a writer now known as Cassius Longinus wrote a treatise called On the Sublime. In this text, he provided what was probably the first effective definition and analysis of the sublime. The text was finally translated into French by a man named Nicolas Boileau-Despréaux (1636–1711), more commonly known simply as Boileau. This translation was the first to bring the concept of the sublime into European thought and discussion, essentially paving the way for the development of sublime art and literature. Boileau's translation, and indeed Longinus' original text, goes into immense detail about what exactly the sublime is, how it contributes to art, how it is reflective of intense emotions and passions, and how it is connected to the imagination. This translation proved immensely influential, particularly in the following century when Romanticism really took off.

Edmund Burke (1729–1797) was an Irish philosopher who in 1757 wrote a treatise called A Philosophical Inquiry into the Origin of Our Ideas of the Sublime and Beautiful. He explained the difference between beauty and the sublime, emphasizing that beauty lacks the element of terror and awe that the sublime possesses. He realized that although pain and fear are unpleasant emotions, they can also be exciting and even intoxicating, particularly in art, which is what makes them so essential to the creation of the sublime. Burke was very interested in investigating sensory experiences and exploring how they connected with Romanticism and art.

Immanuel Kant (1724–1804) was a German philosopher who wrote on a wide array of subjects, from aesthetics to metaphysics. Building on Burke's work, Kant published Observations on the Feeling of the Beautiful and Sublime. In this work, he identified three sublime modes, all of which could be implemented in art. The first mode was the noble sublime, which engendered a feeling of wonder in the viewer and was essentially a quiet and awed admiration. The second mode was the splendid or magnificent sublime, which was the most closely connected with beauty and a feeling of rightness. The final mode of the sublime was the terrifying, which was mixed with fear and dread. One example that Kant gave of the sublime, particularly the terrifying sublime, is the powerless feeling that a person might feel when faced with the natural world, including great mountains, heights, or depths.

Jean-François Lyotard (1924–1998) was a French philosopher whose primary focus was on postmodernism. He also wrote extensively on the sublime as a Romantic aesthetic practice. He considered sublime Romanticism to be a sign of the triumph of modernity in art. Of course, it is very difficult to define modernity, but in Lyotard's view specifically, the sublime represents the end of traditional aesthetics and the birth of something new: a singular moment of intensity that carried over into modern art and beyond, long after Romanticism as a movement was over. Lyotard had the advantage of writing about Romanticism and the sublime in hindsight, which allowed him to explore how Romanticism as a movement was built on the specific cultural milieu of the 1700s and 1800s. He argued that social alienation, increasing urbanization, the rapid development of new technology, and the general sense of unease that came from rapid changes to everyday life were all contributing factors in the attachment that people felt to the sublime at the time. Romanticism as a movement developed in the 1700s, but it was most prominent in the first half of the 1800s.

Romanticism was an art movement, a poetic style, and a painting aesthetic. It was an exploration of strong emotions and a rejection of societal norms. The movement began in Europe and later spread to America, though American Romanticism and European Romanticism are somewhat different. It is important to note that while explorations of romantic love were a part of Romanticism, especially in poetry, the name of the movement is not inherently connected to contemporary ideas of romance. Operatic emotions and extraordinary experiences were at the core of Romanticism in all its forms.

What is the Sublime Imagination?

Imagination was a major part of Romanticism and the sublime. An exploration of the limits of the human imagination was something that many artists explored. This was a way of combining intense and terrifying themes with aesthetically beautiful compositions and details. Many paintings that explored the sublime imagination used a technique called chiaroscuro, which uses a high contrast between dark and light. This technique was not specific to Romanticism alone, but it was a great way for Romantic artists to explore emotional intensity in a visual way.

Eugène Delacroix (1798–1863) was a French Romantic painter. His most famous work is Liberty Leading the People, or La liberté guidant le peuple in French. This painting commemorates the July Revolution of 1830 in France, though it is commonly mistaken for a painting of the French Revolution of 1789. Delacroix emphasizes intense emotion and an imaginative view of the French revolutionary spirit in addition to high contrast between light and darkness.

William Blake (1757–1827) was an English Romantic poet and painter. His poetry was part of the earlier generation of British Romantics, but he was largely unrecognized during his own lifetime. Blake painted a series of works of art depicting Lucifer and other biblical figures, leaning into the terrifying element of the sublime when creating his pieces. He was greatly inspired by the book of Revelation from the Bible when creating his pieces.

Henry Fuseli (1741–1825) was a Swiss Romantic painter whose most famous painting is The Nightmare. This work shows a sleeping woman being haunted by a demon that sits on her chest. A wild-eyed horse is in the background of the painting as a pun on the ''mare'' part of ''nightmare.'' The painting imaginatively depicts a common human experience in a way that is both intriguing to look at and more than a little frightening.

Another essential facet of the sublime in art is the sublime landscape. This is a way of exploring the presence of the sublime in the natural world. Different countries approached the sublime landscape differently in their art. The Barbizon School, for instance, was a French approach that blended Romanticism with realism while rejecting neoclassical elements that were prized in the country at the time. In the US, the Hudson River School explored the vastness of the scenery in the American West using Romantic and sublime elements.

Joseph Mallord William Turner (1775–1851) was an English Romantic painter known for making an immense departure from the recognized and accepted style of landscape painting of his era. He used vivid colors, imbuing his work with a great deal of emotion. Some of his pieces could almost be described as impressionistic, though he was painting before impressionism really took off. The sublime suffuses Turner's paintings to a large extent.

Albert Bierstadt (1830–1902) was an American Romantic painter. He is primarily remembered for his extraordinary landscape paintings in which he displayed the beauty of America using sublime elements. His paintings make his audience feel a great sense of awe, using light and depth of field to create unspeakably powerful landscapes that stick with the viewer. Some discussions of the sublime talk about how something that is truly sublime is hard to look at directly for too long, because the feelings that it creates are too great to bear.

Any discussion of the sublime in art would be remiss not to mention Wanderer Above the Sea of Fog by Caspar David Friedrich (1774–1840). This painting is both portrait and landscape, showing a figure overlooking a magnificent view. Friedrich's painting has become virtually synonymous with the concept of the sublime in Romantic art because it so clearly communicates the awe an individual might feel when confronted with something that is truly sublime.

The sublime is an aesthetic that explores immeasurable greatness through art. It is primarily associated with Romanticism. Elements of the sublime in art include:

Paintings like The Nightmare by Henry Fuseli incorporate the sublime by rejecting order and logic in favor of intense emotion. Edmund Burke was one of the first writers to explore the connection between fear and beauty in the sublime: he pointed out that while they are unpleasant to experience, fear and pain can also be exciting, particularly in art.

What are examples of romanticism?

Romanticism was an artistic and literary movement in Europe and America. Paintings by Henry Fuseli, poems by William Blake, and books like Frankenstein by Mary Shelley are all examples of Romanticism.

What are the 5 elements of romanticism?

There are not necessarily 5 all-encompassing elements of Romanticism. However, 5 major traits of the movement include:

Create an account
Sublime Art and the Romantic Aesthetic | What is Sublime Romanticism?
Start today. Try it now
Art of the Western World

Sublime Art and the Romantic Aesthetic | What is Sublime Romanticism?
Related Study Materials