Copyright
Ruth Burns, Kat Kadian-Baumeyer, Lesley Chapel
What is the difference between substantive and procedural law? Look at the procedural and substantive law definitions and explore illustrative examples. Updated: 11/18/2021

Procedural law and substantive law are used in different ways, and for different reasons. Whether the matter is civil or criminal, in state or in federal court, both kinds of law will be involved. The difference between substantive and procedural law is reasonably easy to state. Substantive law is the law that creates the right being claimed, or the law under which charges are brought. Procedural law sets out when, where and how the claims are made and the how the case is handled before the court. In some cases, the correct - or faulty - use of procedural and substantive law can make the difference between wealth and poverty, or between freedom and penal servitude. So being able to identify each type of law can be crucially important.

While most substantive law is set out in statutes, procedural laws are usually set out in Rules, like the Rules of Civil Procedure, or the Rules of Criminal Procedure. These can be federal rules, or they may be state laws that are specific to each state. Whether state or federal, civil or criminal, these rules include matters relating to the court's jurisdiction to hear the case, the standing of the parties to bring the lawsuit, and the correct venue where the case should be heard. There are also certain basic rules that are required by the due process clause of the United States Constitution. These include:

the right to notice of the suit or charges;

the right to be personally served process paperwork;

the right to be heard by an impartial tribunal;

The right to a speedy trial;

and many other rights and protections. It is extremely important to be aware of these protections, and of the procedural rules in any court matter. A mistake in procedure might get the case dismissed.

Substantive and Procedural Law in Criminal and Civil Cases!!

While every case will have elements of both substantive and procedural law, these different kinds of law will have different implications depending on whether the matter is civil or criminal. When someone is charged with a crime, the law offers substantial protections for the defendant which will not necessarily apply in a civil matter.

History of Substantive and Procedural Law!!

In the United States, the substantive law has been largely adapted from the English Common Law, but the procedural laws have developed from the rights stated in the Constitution. 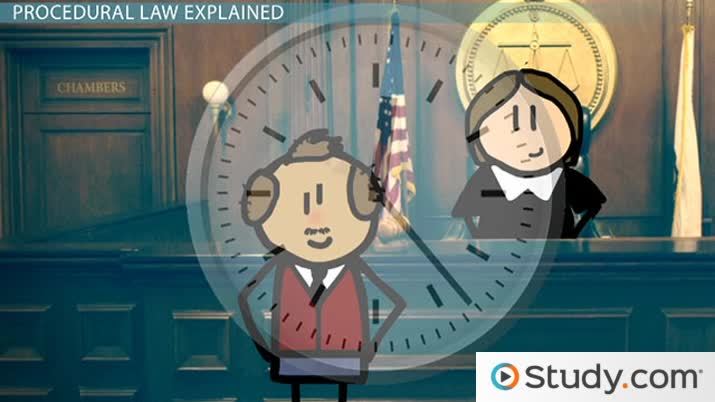 Coming up next: The Court System: Trial, Appellate & Supreme Court

As a procedural law example, Sue seems likely to win her lawsuit. But Sally's lawyer notices a problem. Sally was not served process on the lawsuit until well after the time stated in the Rule. The lawyer brings this to the court's attention at the parties' preliminary hearing, and moves for dismissal of the lawsuit and all its claims. The judge agrees, and Sue's lawsuit is dismissed on due process grounds, for failing to comply with the procedural law.

Whether the case is criminal or civil, the ultimate goal is to convince the judge and the jury. Both substantive and procedural laws are necessary to accomplish that goal.

Substantive and procedural laws are created by different means; while substantive laws are usually carried down in some form from the English Common Law, procedural laws in the United States have their roots in the Constitution. Both types of law apply in some form to every case; however, the procedural rules can have greater impacts in criminal cases, because the procedural rules ensure the protection of the rights stated in the Constitution. Both of these types of law are critically important in successful litigation.

Substantive and procedural laws are created by different means; while substantive laws are usually carried down in some form from the English Common Law, procedural laws in the United States have their roots in the Constitution. Both types of law apply in some form to every case; however, the procedural rules can have greater impacts in criminal cases, because the procedural rules ensure the protection of the rights stated in the Constitution. Both of these types of law are critically important in successful litigation.

Make a set of flashcards that includes the definitions of all of the key words from the lesson. Write the word on one side of the flashcard and its definition on the other side. Then, use the flashcards to quiz yourself or a classmate.

Tip: Even though "tort" was not a bolded key word from the lesson, you may find it useful to include it.

Write an essay of several paragraphs in which you define substantive law and then provide an example of what it is and how it functions. Your example could be from civil law or criminal law, or you could provide one example of each.

Example: Jason vandalized a neighbor's car. Substantive law states that this is a crime that is punishable by a fine and/or a jail sentence.

Write an essay of several paragraphs that defines procedural law and gives an example of what it is and how it works. Your example could be from a criminal case or a tort case.

Example: For Bonnie's trial for theft, procedural law states that the prosecutor had one week from the time of her arrest to issue formal charges.

In several paragraphs, write an essay that explains the role of due process in procedural law.

Tip: Be sure to consider the role of the 14th Amendment.

Make a chart or other type of graphic organizer that explains how substantive law and procedural law work together in a criminal or civil case.

Example: Think of a specific example of a case, such as a sexual harassment case involving an employee and his or her boss, to depict how substantive and procedural law would work together in such a case.

What is procedural law and substantive law?

Procedural law is the law that sets forth the steps and requirements to place a litigation before the courts, and through trial.

Substantive law is the law that sets out the actual right being claimed, or the actual crime to be prosecuted.

What is an example of a procedural law?

Procedural laws set forth the rules for moving a case through the courts. They can include rules relating to the venue of the case or the jurisdiction of the court. Procedural laws also involve the Constitutional requirements of Notice and Service of Process.

Why do we have procedural law?

Procedural law is necessary for the smooth progression of a case through the courts; it sets out the steps to be taken in a litigation. Procedural law in the United States is also closely linked to the rights stated in the Constitution, such as the right to Notice of the charges, and the right to personal service of process. Procedural laws protect these rights.

What is substantive law example?

The Impact of State Prosecutors on Police Practices

Transferred Intent for Assault and Battery