What Does Succession Mean?

There are multiple ways in which to define succession. The term is commonly viewed as the order in which an item -- such as family property -- or position title -- think of ascension to King or Queen -- is passed from one person to another. Similarly, the term refers to the conditions that must be met for a given person to acquire a physical item or position title. 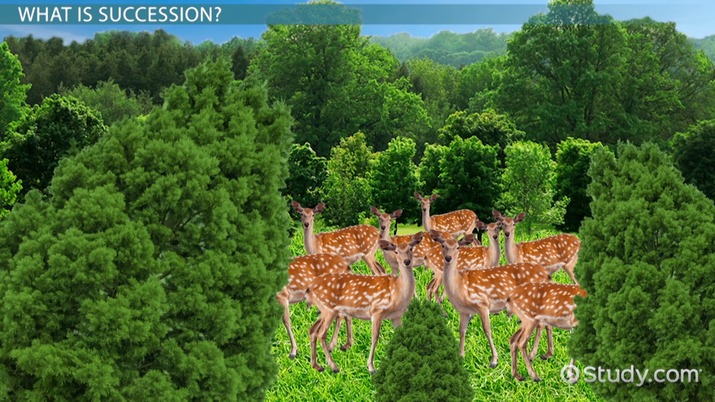 Try it now
Back
Coming up next: Savanna Grasslands Biome: Definition & Examples

What is Succession in Biology?

The process of biological succession refers to the slow, progressive change that occurs within every ecosystem. Whether you are standing in a field of prairie grass, a forest of coniferous and hardwood trees, a coastal wetland of aquatic plants, or a rocky field of retreating glaciers, the biological composition of plants and animals has changed throughout time. And such change will continue well into the future.

According to the law of succession, the structural makeup of every biological community fluctuates between states of low and high instability. Any landscape devoid of life can slowly emerge into a biological oasis. All that is needed is the spontaneous appearance of a few plant species to loosen the soil and infiltrate it with nutrients and minerals that promote the growth of a larger array of plants. With the passage of time, a new set of plants will succeed the first plant arrivals and attract a small set of animals. Eventually, the sun-loving plants will give way to taller plants casting more shade on the ground that, in turn, attract a new, larger set of animals. And so the biological succession process unfolds until the community reaches a state of climax. That is, a relatively small number of animal and plant species dominate the community. The less competitive plants and animals either abandon the area or die off. But as you will learn below, environmental disruptions can easily alter this state of equilibrium and restart the successional process.

Extreme changes to the surface of land can jumpstart biological succession. Volcanic eruptions and fast moving landslides and mudslides that strip the land of grass, shrubs and trees are prime examples of the topographical factor.

Across the world there is a large variety in soil type, soil pH, and soil moisture levels. Chalk, clay, loam, peat, sand, and silt represent six main types of soil. There are countless ways in which these soil groups can mix with each other. Each soil type variation has its own pH level, ranging from highly basic to highly acidic, as well as its own moisture level (for instance, sand retains little water and clay retains a lot). Consequently, the specific make up of soil determines which type of plants can occupy a biological community.

Precipitation and wind determine the directional path of biological succession. Land areas that receive too little rain may become dry, causing fires to erupt during a lightening strike. In such communities, some plants require low intensity fires to release seeds into the soil for germination. Additionally, some communities, like deserts, accommodate plants that can tolerate arid conditions. Conversely, in areas with high rainfalls, such as rainforests, only plants that can sustain high levels of water moisture can grow and thrive. Wind also influences which plants occupy a biological community. Strong winds can erode soils, causing the loss of plant life and relaunching the successional process. Winds can also fan fires and exacerbate that land disturbance process.

During the beginning stages of biological succession, the diversity of plants and animals can be quite high. As species of plants and animals interact via foraging, predator-prey and competitive relationships, some species will become dominant and force other species to abandon the area. Such interactions yield stability in the biological community, known as the climax stage. During this state of equilibrium, biological diversity becomes significantly lower.

What Are the Two Types of Succession in Biology

There are two types of biological succession: primary and secondary.

Primary succession occurs when a land area is devoid of life; not even the soil contains nutrients that can sustain life. The photos displayed earlier demonstrate a prime example of this type of succession.

Immediately following a volcanic eruption, like what happened on Mount St. Helens in Washington State on 18 May 1980, molten lava kills all plants that once covered the mountainous landscape. In the case of Mount St. Helens, no life could be found in large areas. Fortunately, pioneer species that love highly disturbed areas are the first species of plants to occupy a barren landscape. Lupins, a purple and blue flowered plant within the pea family, was the only pioneer species that could occupy the volcanic rock on Mount St. Helens. Unlike many other plants, lupins can generate their own nutrients while slowly adding nutrients to the soil, thereby promoting future plant growth. Several years after the eruption of a volcano, a larger mix of plants start occupying the community, such as algae, fungi, moss, lichen and different types of grass. As more sun-loving plants take root and fill the soil with nutrients, insects start to arrive as well as animals that feed on the insects (e.g., birds and reptiles) and growing number of plants (e.g., rabbits). Eventually shrubs start to establish themselves, creating shade in some areas and attracting more animals to feed on the invertebrates and herbivores (e.g., deer, mountain lions). Finally, trees emerge, creating even more shade and shifting the arrangement of floor plants from those dependent on sunlight to those more tolerant of shade. Even the animal population stabilizes during this final stage of primary succession.

Also known as serule, micro-succession refers to the order in which microbial organisms (e.g., fungi, bacteria, algae, and protozoa) replace each other within biological communities of dead trees, animal feces, and the like. Micro-succession can even be launched when an animal, plant, or bacterium secretes a product that disrupts the community's microbial arrangement. Changes in the microbial habitat's pH and/or moisture level as well as temperature are other instigators of micro-succession.

Biological succession is a normal process that elicits structural changes within all types of biological communities. Specifically, it defines the order in which plants and animals will occupy a community and replace each other. Primary succession happens less frequently than secondary succession because it is limited to land areas that are devoid of life, above and below the surface of soil. Pioneer species are types of plants that populate a barren landscape (e.g., sand dune, site of a volcanic eruption) and create nutrients of their own. These pioneer species also inject nutrients into the soil so that more plants can populate the area. Undoubtedly, it takes the most amount of time to complete the primary succession process because the biological community must rebuild itself from scratch. Secondary succession is a more common occurrence within all types of biological communities because it follows disturbances that leave some nutrients within the soil, such as following a wildfire or farming event. Micro-succession (also called serule) occurs at the microbial level, dictating in which order micro-organisms will inhabit rotting trees and animal feces. Factors influencing biological succession are topographical, soil, climate and animal-plant interactions.

What are the types of succession?

Primary succession occurs in areas that are completely barren, such as following a volcanic eruption or landslide. In such communities, no life exists and no nutrients are found within the soil. Pioneer species must populate the community to establish nutrients in the soil and support the emergence of new plant species. Secondary succession occurs when a smaller disturbance impacts a biological community, leaving behind some nutrients in the soil. In both types of succession, the mix of plant and animal species changes until the climax stage is reached.

What does succession mean in biology?

What do we mean by succession?

The term succession explains the order in which an item (such as money) or title (such as role of King) is passed from one person to the next. It also refers to the conditions that must be carried out to allow that item or title to be passed from one person to another. Lastly, succession can refer to the order of events, such as when specific activities occur during a festival.

What Are Algae Blooms? - Definition & Examples

Cell Cycle Phases, Division & Sequence | What is the Cell Cycle?