Copyright
Andria Emerson, Danielle Reid
What is a sulfate? Learn about sulfates, their properties, and the uses of their compounds. See sulfate structure with charge and chemical formula for sulfate. Updated: 10/15/2021

What is a Sulfate?

Sulfur is a nonmetal located in group VI on the periodic table. Sulfur is tasteless, odorless, and is pale yellow in color. In its pure form, sulfur is a brittle solid and a poor conductor of electricity. Sulfur is not soluble in water.

Oxygen is also a nonmetal located in group VI on the periodic table. Oxygen generally forms a diatomic molecule with one other oxygen atom to form {eq}O_{2} {/eq} making it more stable. Oxygen is a colorless, odorless gas at room temperature. Like sulfur, oxygen is a poor conductor of electricity.

Sulfate is considered a polyatomic anion. A polyatomic ion is a group of two or more atoms that behave as a single unit. Sulfate is an anion because its overall charge is negative. When sulfate is converted into sulfuric acid it is known to produce salt. Sulfates will often make bonds with cations to form neutral and more stable compounds such as aluminum sulfate {eq}Al_{2}(SO_{4})_{3} {/eq} and magnesium sulfate {eq}Mg(SO_{4} {/eq}. 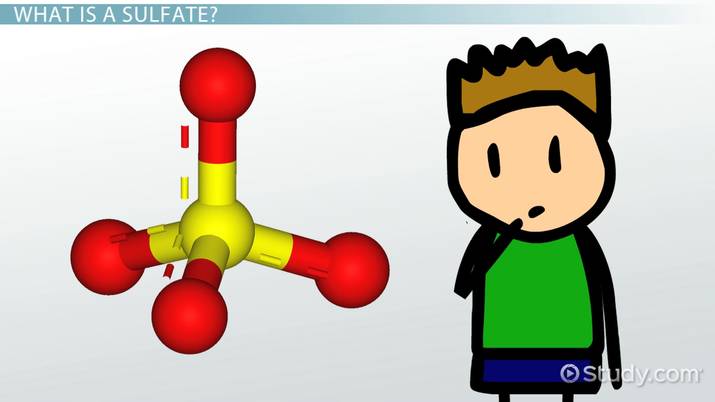 Coming up next: Common Minerals & Their Uses

Both sulfur and oxygen are found in group VI of the periodic table. Elements in this group have 6 valence electrons. Valence electrons are electrons located in the outer shell of an atom. They are the electrons involved in bonding.

The Lewis dot structure for sulfate is shown below.

In order to understand why there are double bonds in the resonance structures, the formal charge of each atom can be observed. Formal charge is defined as a charge assigned to an atom in a molecule assuming electrons in that molecule are shared equally.

The formula for finding formal charge is:

The image below shows the formal changes for each atom. Notice each atom has charges. When this happens, the molecule is unstable.

In order to reduce charges on the atom, lone pairs can be converted to bonds. Since oxygen atoms are more electronegative than sulfur, oxygen atoms should hold negative charges. Notice how the conversion of lone pairs to a bond reduces charges making the molecule more stable.

The six resonance structures of sulfate are a result of different combinations of these double bonds forming.

Sulfate has a {eq}2^{-} {/eq} charge. In order to understand why this polyatomic ion has a charge, the formal charge of one of the resonance structures can be observed.

The picture below shows the formal charges for each atom in sulfate. When all the charges are added, the total charge on sulfate is -2.

Sulfate is not a metal. It is made of one sulfur atom and four oxygen atoms. Both oxygen and sulfur are nonmetals. Sulfate is capable of bonding with metals such as aluminum sulfate {eq}Al_{2}(SO_{4})_{3} {/eq} and magnesium sulfate {eq}MgSO_{4} {/eq}

Sulfate has many different uses. These include:

Sulfate can also be harmful.

Sulfur-containing compounds enter the atmosphere through the spray from ocean waves, decomposition of biological materials, and combustion of fossil fuels. When sulfates mix with water, sulfuric acid is formed. Acid rain is defined as any form of pollution that contains high levels of acids. As precipitation in the sky mixes with sulfates, acid rain forms. Acid rain can be in the form of snow, mists, and dry dust. Unfortunately, acid rain does not only contaminate the areas where most sulfates enter the atmosphere. Acid rain can fall many miles from the original source of pollution. The acid rain enters water sources and soil. Acid rain lowers pH levels making water and soils more acidic. Acid rain can also cause toxic substances, such as aluminum, to be released in water and soil. This can have detrimental effects on the health of organisms living in areas affected by acid rain. Acid rain can also increase the erosion of buildings and other structures.

Sulfate is a compound made of sulfur and oxygen. Its chemical formula is {eq}SO_{4}^{2-} {/eq}. Sulfate is considered a polyatomic anion. According to the Valence Shell Electron Pair Repulsion (VSEPR) theory, sulfate has tetrahedral geometry. Resonnance structres are a group of two or more Lewis structures that represent a single polyatomic species. Sulfate has six resonance structures.

Sulfates are often found in cleaning products. Sulfates produce a lather that carries dirt and oils away. Sulfur-containing compounds can be released into the atmosphere through several processes. These sulfate-containing compounds are then converted to sulfuric acid as they mix with precipitation and fall as acid rain. Acid rain is defined as any form of pollution that contains high levels of acids. Acid rain lowers pH levels affecting plants, organisms, and erosion of buildings.

What is sulfate in chemistry?

Sulfate is considered a polyatomic anion. A polyatomic ion is a group of two or more atoms that behave as a single unit. Sulfate is an anion because its overall charge is negative.

What is Sulfate made of?

Sulfate is a compound made of sulfur and oxygen. It is a polyatomic anion made of one sulfur atom and four oxygen atoms.

What is sulfate used for?

It is also used in dietary supplements, breads, preserved fruits and vegetables, gelatins, and puddings

What is the formal charge of S in SO4?

The formal charge of sulfur in a sulfate compound is zero. This is due to its six different resonance structures.

Sulfate Charge, Formula, & Structure | What is SO4?
Related Study Materials

Lanthanides Series & Periodic Table | How Many Elements are in the Lanthanide Series?

Nitrates in Food Examples & Side Effects | What are Nitrates (NO3)?

What is Oxygen? | Formula & Levels