What is a Solution? 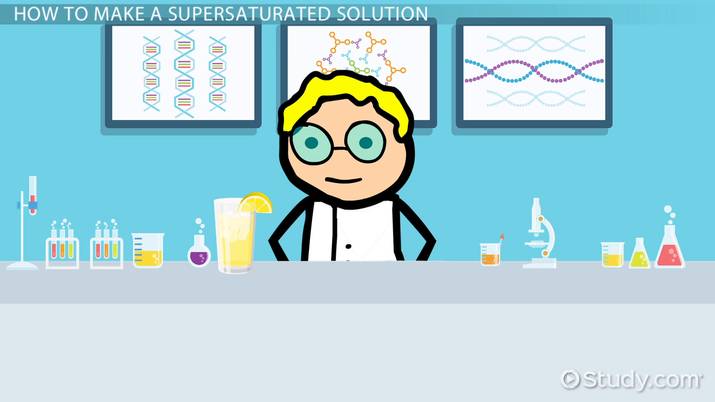 Coming up next: The Atom

What is a Supersaturated Solution?

What is dynamic equilibrium?

Dynamic equilibrium is one of the most important concepts in the study of solution chemistry. When two opposing chemical reactions (e.g., dissolution and crystallization of a solute) are operating simultaneously at equal rates, the overall process is said to be in dynamic equilibrium. This process can be summarized for a liquid solution by the following reaction:

For a gas phase solution such as water vapor in air, the reaction will involve condensation rather than crystallization:

When the processes of crystallization, condensation, or bubble formation do not occur for some reason, the solute concentration can exceed its solubility. That is, the solute can be present at levels that exceed the saturation point of the solution. Phenomena that block crystallization and condensation are called a kinetic barrier to nucleation. Nucleation is the process of solute coming out of solution to form either a solid crystal (for liquid solution) or a droplet of liquid (for the gas phase solution). The nucleation of crystals is often a kinetic barrier to the crystallization process because the formation of the atomic structure of a crystal requires energy (heat). Under some conditions, that energy is not available. A saturated salt solution offers a real-world example of a reaction in dynamic equilibrium:

This reaction indicates that when the salt dissolves, it breaks into its constituent atoms. Because of chemical interactions in the solvent, the sodium and chlorine atoms become electrically charged and are referred to as ions in solution. Sodium becomes a positively charged ion, and chlorine becomes a negatively charged ion. In the absence of a kinetic barrier to nucleation, the ions in solution can recombine through the crystallization process to form a crystal of solid sodium chloride.

How Does a Solution Become Supersaturated?

A solution becomes supersaturated when the amount of solute per volume of solution exceeds its maximum theoretical concentration. That is when the solute concentration exceeds its solubility. As discussed above, this occurs when there is a kinetic barrier to crystallization or condensation processes. A typical way to overcome a kinetic barrier to the nucleation is to add what is called a seed crystal or condensate seed. The seed added to a supersaturated solution eliminates the need for nucleation and thus eliminates the kinetic barrier to crystallization or condensation. A simple experiment involving sugar dissolved in water can be used to demonstrate this process.

Why Do Sugar Crystals Form In A Supersaturated Solution?

Like most substances, the solubility of sugar increases with increasing temperature. So, according to the solubility table below, we can make a saturated solution by adding 487 grams of sugar (sucrose) to 100 milliliters of water that has been heated to 100 degrees Celsius (C). Now, what happens if we let the sugar water cool down to 25C? The solubility table indicates that if the sugar does not crystallize (i.e., if there is a kinetic barrier to nucleation), you would end up with a supersaturated solution. You can calculate the amount of supersaturation by subtracting the solubility of sugar at 25C (211 g per 100 mL) from the amount of sugar we added to the solution when it was at 100C (487 g per 100 mL). So, at 25C, our sugar solution is supersaturated by 276 grams per 100 milliliters of solution.

So, why do sugar crystals form in a supersaturated solution? The answer has to do with the concept of seed crystals mentioned above. Seed crystals eliminate the kinetic barrier to crystallization. The surface of the seed attracts the sugar molecules as they come out of solution because its surface represents a low-energy nucleation site. That is, a site where sugar crystals can form without any kinetic barriers to nucleation. Once all of the excess sugar has crystallized onto the seed, the dynamic equilibrium of the solution is reestablished, and you now have a saturated sugar solution. Seeds do not always have to be crystals. For example, just placing a string or wooden stick in a supersaturated sugar solution is enough to overcome the kinetic barrier to nucleation. The excess sugar crystallizes onto the string or stick to form rock candy.

Making A Supersaturated Solution Through Evaporation

Supersaturated solutions can also be created by evaporating a saturated salt solution. Evaporation removes solvent from the solution, thus increasing the concentration of solutes. If enough solvent is removed, the solute concentration can exceed its solubility, thus creating a supersaturated solution. An important example of this process involves evaporating salty water from natural environments to generate salt deposits that can be used for industrial or culinary purposes. Seawater is typically undersaturated with sodium chloride. However, in salt fields, large enclosed regions of seawater are allowed to evaporate until they become supersaturated. Crystallization occurs and forms large deposits of salt that can be harvested and sold.

Supersaturated solutions have three defining characteristics: (1) the solute concentration exceeds its solubility, (2) the solution is metastable (i.e., not in equilibrium), and (3) the processes of crystallization or condensation are kinetically inhibited.

Characteristic 2: the Solution is Metastable

Characteristic 3: the Processes of Crystallization or Condensation are Kinetically Inhibited

As discussed above, supersaturated solutions form because the crystallization and condensation processes that would otherwise bring the solutions into dynamic equilibrium are kinetically blocked. These kinetic limitations happen because the formation of solute crystals or condensate droplets require a certain amount of energy to form (i.e., nucleate). In some chemical scenarios, such as cooling a supersaturated solution, the energy needed to create these crystals and droplets is not present. In such cases, the only way to overcome the kinetic limitations is to add seed crystals that remove the need for nucleation and thus facilitate the crystallization or condensation of the excess solute. This leads to the formation of a saturated solution (i.e., a solution in dynamic equilibrium).

What are some examples of supersaturated solutions?

There is a diverse range of natural and anthropogenic examples of supersaturated solutions. Some of the most common and most important include: (1) sugar solutions prepared at high temperature to make rock candy, (2) carbonated beverages before they are opened (popping the cork releases the supersaturated carbon dioxide), (3) cave waters supersaturated in calcium carbonate that form stalactites and stalagmites, (4) air masses that dissolve water vapor at high temperature but are then transported to cooler parts of the atmosphere, supersaturated drug delivery systems, (5) the blood of deep-sea divers, which can supersaturate with nitrogen due to high water pressures, (6) sodium acetate hand warmers.

What is supersaturated solution?

Why is Water the Universal Solvent?

The Rate of Dissolution: Factors and Definition

Phase Diagram of Water vs Other Substances: Differences & Meaning