When referenced in the study of biology, symmetry refers to the balance, or agreement, in dimensions of an organism. Symmetry can be found via the use of mathematics by dividing the organism into as many equal parts as possible (which is typically two or more equal parts) along an axis. For example, a human being could be divided into left and right halves, and a marine jelly could be divided into almost infinitely identical parts. Almost all animals are observed to have some type of symmetry, with few exceptions to this rule. 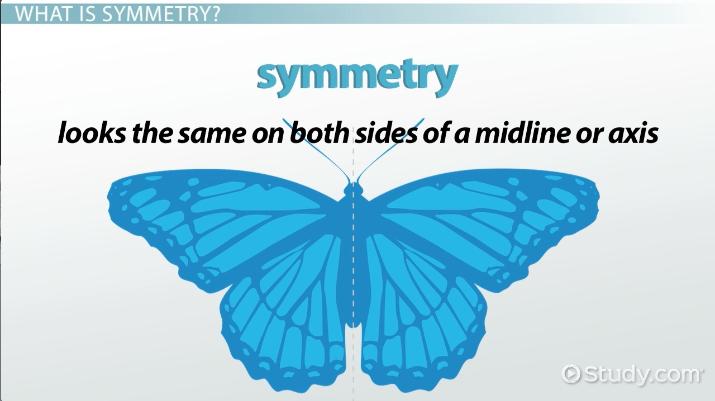 Coming up next: Chemoautotrophs: Definition & Examples

There are multiple types of symmetry observed in the animal kingdom. Symmetry is a characteristic in the animal kingdom used to classify organisms as well as determine common ancestors for these groups; since most living organisms share the type of symmetry they present with their most recent common ancestor. The types of symmetry this lesson will elaborate on include: asymmetry, bilateral, biradial, radial, and spherical symmetry.

An organism which is said to exhibit asymmetry has no symmetry whatsoever, regardless of how it would be cut on any axis or plane. Asymmetrical animals include some species of sponges, which are considered one of the most primitive members of the animal kingdom.

Animals that are bilaterally symmetrical and cephalized are able to typically move about quickly in order to escape possible predation as well as attack prey. The example of a fish fits well because fish are bilaterally symmetrical and cephalized. They are able to respond quickly to external stimuli due to these traits and move quickly toward, or away from, the stimulus. All vertebrates display bilateral symmetry.

Fish, and other bilaterally symmetrical animals, have different bodily regions such as anterior, posterior, dorsal, and ventral portions. The anterior refers to the top of the body, typically where the head is observed. The posterior of the body refers to the region where the tail, or tailbone, is located. Dorsal is the anatomical term for the back side of an animal (for example, fish have dorsal fins). Ventral is used to refer to the front, or belly, of a bilaterally symmetrical animal.

Biradial symmetry is a type of symmetry exhibited in organisms that display both bilateral and radial types of symmetry and is very rare in the animal kingdom. These animals typically have an oval-shaped body and are either weak swimmers, floaters, or sessile (do not move). Examples of animals that have biradial symmetry include ctenophores (comb jellies) and sea walnuts.

Radial symmetry is displayed in certain organisms which have bodies that radiate from the center outwards. Radially symmetrical animals can be cut on a median plane multiple times in multiple different ways and still give way to nearly identical halves. Animals that have this type of symmetry typically either move via floating freely through a water body or are weak swimmers. This includes animals such as cnidarians (such as sea anemones, hydras, and jellies). Animals with both biradial and radial symmetry typically have an oral region (a mouth) and an aboral region (the area opposite of the mouth).

Members of the phylum Echinodermata (like sea urchins, sea stars, and sand dollars) display a special kind of radial symmetry known as pentaradial symmetry. They can be divided into five equal halves when divided on a median plane. The larvae of echinoderms are bilaterally symmetrical, so many scientists believe that it is possible that the closest common ancestor of echinoderms was actually bilaterally symmetrical.

Spherical symmetry is observed in organisms which are sphere-shaped. These organisms can be cut on any axis or along any plane and will have near identical halves. They have no distinguishable head, top, bottom, nor left or right sides. This type of symmetry has yet to be recorded in the animal kingdom, and has currently only been recorded in certain unicellular eukaryote species. This includes unicellular eukaryotes that were once considered members of the kingdom Protista, Radiolaria and Heliozoa. The algae genus, Volvox, has colonial members which are externally spherical.

What is symmetrical nature?

Symmetrical nature refers to the the balance in proportions of an organism where the entity can be divided into one or more equal portions. All animals, aside from certain sponges, display some sort of symmetry.

Why are animals symmetrical?

Animals display symmetry because some of their bodily proportions are balanced. Different types of symmetry are witnessed in most animals that move freely throughout their environments.

What are the types of symmetry?

Do all animals have symmetrical bodies?