Copyright
Amanda Robb, Lauragrace Allen
The synaptic cleft is vital to how information in the brain is relayed from one neuron to another. Learn the definition and all about how the synapse works. Updated: 09/09/2021 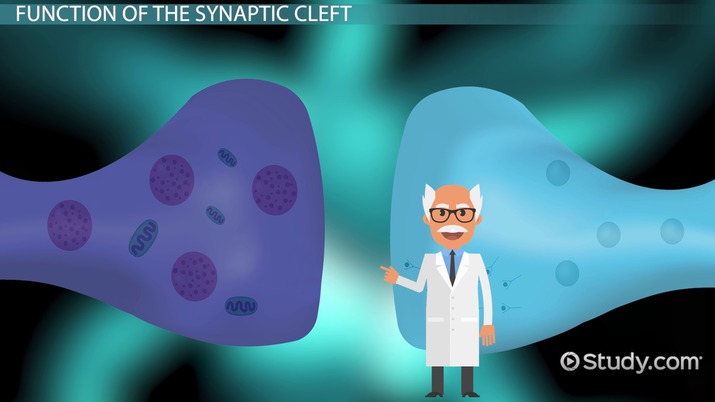 Coming up next: The Eye and Eyesight: Large Structures

What is a Neuron?

Neurons are the cells of the nervous system. They are electrochemical cells and are capable of sending high speed electrical signals and transferring those signals into chemical signals that can be sent to other cells. Neurons can communicate with other neurons, and additional cells and tissues in the body such as glands and muscle. Neurons are responsible for controlling not only all of our physical actions but also our thoughts and emotions.

Neurons are highly specialized and have a unique structure to enable them to carry out their function. Neurons have a cell body that houses the important organelles. On one end of the cell body are dendrites, which are projections that receive information from the environment or from other neurons. On the other end of the cell body is the axon. This is a long projection that carries the electrical signal, called an action potential.

The axon ends in the axon terminal, also known as the synaptic terminal. This is where the electrical signal is converted to a chemical signal, called neurotransmitters. The neurotransmitters are released into the synapse to facilitate communication with other cells. What's a synapse? The synapse is the space between one neuron and a target tissue. So, where is the synapse located? The synapse is located in the space just after the axon and synaptic terminal of a neuron and the dendrites of the next neuron.

What Is a Synapse?

The synapse is an essential component in chemical communication for neurons. There are several steps that occur to facilitate synaptic activity.

How does a synapse work?

The first step to facilitating synaptic activity is for an action potential to travel down the axon to the synaptic terminal. At the terminal the increase in voltage from the action potential triggers voltage gated calcium channels to open. This allows calcium to rush into the cell. Calcium binds to calcium binding proteins, that allow for the mobilization of vesicles containing neurotransmitter. The vesicles move towards the membrane at the synaptic terminal and eventually fuse. This releases neurotransmitters into the synapse. In the synapse the neurotransmitters diffuse to the target cell where they are able to bind to receptors and trigger changes in the cell through chemical communication.

What Does the Synapse Do?

The process of synaptic transmission begins with the pre-synaptic cell sending an action potential, which can be converted to a chemical signal at the synapse. The steps below outline how this process happens.

Neurons are nerve cells in the brain and nervous system. Neurons have several parts including:

The synaptic cleft, also known as the synaptic gap, is the space in between the axon of one neuron and the dendrites of another and is where the electrical signal is translated to a chemical signal that can be perceived by the next neuron. After the post synaptic neuron receives the chemical signal of the neurotransmitters through the synapse, it can cause changes in the dendrites which can begin the process again.

Where is synapse located?

The synapse is located just after the axon terminal of a neuron and is considered the space between the neuron and the target cell.

What's another word for synaptic cleft?

Another word for synaptic cleft is the synapse. These two words are synonymous and describe the space between the neuron and the target tissue.

What is synapse and synaptic cleft?

The synapse and synaptic cleft is the space between the axon terminal of one neuron and the target cell, tissue or next neuron.

How to Disagree with the Group: Examples of Idiosyncrasy Credits

Axon Function, Meaning & Types | What is an Axon?

What is Dopamine? | Dopamine Function & Effects on the Brain

What Are Endorphins? - Definition, Types & Function

Nodes of Ranvier: Function and Definition

Absorption of Nutrients to the Lymphatic System