Synesthesia is a term for a literary device that actually has its origins in neurology. In order to fully understand the ''synesthesia'' literary definition, it is helpful to have a grounding in the origins of the term. Synesthesia is a harmless neurological condition in which a person experiences more than one sense (taste, touch, smell, etc.) simultaneously. For instance, upon hearing a foghorn, a person with synesthesia might see the color orange, or the sound of rain might taste like chocolate. Some kinds of synesthesia are more common than others, with one of the most common being an association between letters of the alphabet and colors. People with this form of synesthesia might feel very strongly that the letter A is green, that Q is turquoise, and so on.

Synesthetic associations are unchanging throughout a person's life, though they do vary from one synesthete to another. The prevalence of this condition is debated, with estimates ranging from one in 20,000 to one in 200 people experiencing some form of synesthesia. Some people go years or decades without realizing that their synesthetic experiences are not the norm for those around them. Some visual artists and musicians are widely believed to have had synesthesia that informed their craft, including artists Wassily Kandinsky and Vincent Van Gogh, and composer Aleksandr Scriabin. Although synesthesia is relatively rare, writers and artists do not need to experience it themselves in order to be inspired by synesthetic experiences. Many writers incorporate synesthesia into their works as a literary device regardless of their own neurological experiences: the phrase ''bitter cold'' is commonly understood to mean ''very cold'' but is in fact a synesthetic association between taste (bitterness) and physical sensation (cold). 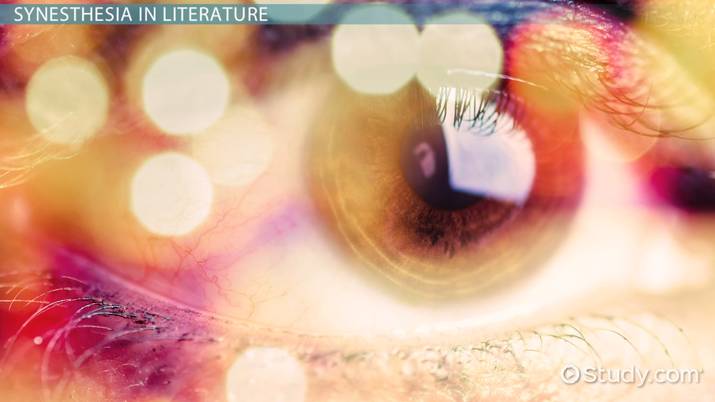 Coming up next: Simile vs. Metaphor: Differences & Examples

Importance of Synesthesia as a Literary Device

In addition to its neurological definition, ''synesthesia'' can be a term for a literary device. When writers use descriptions that blend two or more senses, they are using the synesthesia literary device. Many commonly accepted associations between ultimately disparate concepts exist in contemporary culture, whether most people are aware of them or not. For instance, black is associated with mourning and sadness, while red is associated with anger and passion. There is nothing about these colors that necessarily links them to their associated emotions, making the link essentially synesthetic in nature but shared by a large group of people. The same is true of phrases like ''flowery music'' or ''green with envy.'' When writers exploit these connections, they are using synesthesia.

Some instances of literary synesthesia are less reliant on commonly accepted cultural associations. Creative uses of literary synesthesia can help writers evoke unusual and specific moods and ideas. In Dante's Divine Comedy, for instance, the author uses the line ''back to the region where the sun is silent'' (Inferno, Canto I), connecting the visual of the sun with the auditory experience of silence. This is not a common association, but it is an expressive one that helps readers understand the experience that the speaker is going through.

The following novels and plays are prime examples of synesthesia in literature. Readers quickly get a sense of the meaning of the words even when the association is not necessarily familiar:

All of the above examples serve not only to help readers understand the narrative, but also to create a more vivid and expressive narrative landscape. These synesthetic phrases tend to stick in the mind, developing strong visuals and sometimes even becoming culturally accepted associations.

When it comes to synesthesia, poetry is particularly fertile ground. Creative use of synesthesia is perhaps more common in poetry than in any other form of literature because poetry encourages unusual uses of language. The following poems use synesthesia, sometimes in unexpected ways:

These examples are just a small representative sample of the many possible uses of synesthesia in poetry and literature. This literary device is a great way for writers to experiment with new forms of expression.

Synesthesia is a term for both a neurological experience and a literary device where two senses are blended together or experienced simultaneously. Many examples of literary synesthesia have made their way into everyday speech, including phrases like ''green with envy,'' ''bitter cold,'' and ''flowery music''. Shakespeare is thought to be responsible for the association between the color green and feelings of jealousy and envy; he makes the comparison in his famous play, Othello.

Writers can use synesthesia to produce a wide variety of effects in their work. For instance, F. Scott Fitzgerald describes ''yellow cocktail music'' in The Great Gatsby to convey a sense of warmth and happiness at a party. In another music-based example, Oscar Wilde describes a ''mauve Hungarian band'' playing ''mauve Hungarian music'' to suggest that the music is drab and boring. In his poem ''Harlem,'' Langston Hughes goes beyond the usual use of color in synesthesia and instead compares the idea of a ''dream deferred'' to both smell and taste.

What is an example of synesthesia in poetry?

The poem ''The Spirit of Poetry'' by Henry Wadsworth Longfellow includes the line ''And her silver voice / Is the rich music of a summer bird.'' Describing people's voices as silver is a common form of poetic synesthesia.

Is synesthesia a rhetorical device?

Synesthesia is a literary device, sometimes also described as a rhetorical device. It is a way for writers to incorporate multiple senses into their descriptions to make them more evocative.

What is the effect of synesthesia in writing?

Synesthesia can have numerous effects in writing. Often, it serves to develop increased interiority, letting readers see things from the protagonist's or speaker's perspective. Sometimes, synesthesia is used for humorous purposes or to evoke a commonly understood association between, for instance, a color and a mood.

Prolepsis Types & Examples | What is a Prolepsis in Literature?

What is Caesura in Poetry? | Caesura: Examples in Poetry

What is a Motif in Literature? | Literature Motifs Examples & Types

Archaism in Literature Overview & Examples | What is Archaism?

The Islamic Revolution in Persepolis

Anaphora: Examples | What is Anaphora?