What is a Synovial Joint?

Imagine sitting at home watching a movie. When the movie ends and the credits start rolling, you reach for the remote to change the channel. There are few tasks as easy as picking up the remote, but this simple action requires the coordination of multiple structures of the human body working in unison. Muscles must contract to generate force to move the arm, energy must be generated to fuel those contractions, bones must be rigid enough to hold the arm out straight and provide support, and joints must be able to bend and move to provide mobility. Let's take a moment to discuss joints.

When classified by joint material, there are three types of joints:

Of these three joint types, synovial joints are the most abundant in the body and allow the range of motion needed to move about our environments. They are identified from the other joints because of the presence of a cavity between the bones that contains synovial fluid. Let's look at this in more detail.

Synovial joints are characterized by the presence of an articular capsule. This capsule fills with fluid and allows bones to move without rubbing against each other. When observing a joint, it can be classified as synovial if the presence of this capsule is observed. Oftentimes, however, the inside of a joint cannot be seen. Fortunately, joints can also be classified by their function. The body contains three types of functional joints: 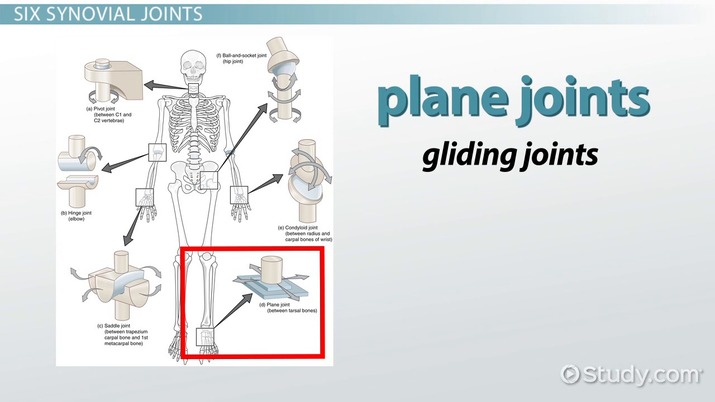 Coming up next: Fibromyalgia: Symptoms & Treatment

Synovial joints can be further classified by how they move. Traditionally, there are six types of synovial joints:

Pivot joints allow for a joint to rotate around a single axis. Joints that pivot are seen in the hand and neck, and allow us to rotate our hands about our wrist or our head so we can look from side to side.

Gliding joints are also often referred to as planar joints, as two planes are gliding on top of one another. Typically these joint types are found in areas of the body where flat bones glide against each other but a great amount of mobility isn't necessarily needed.

Ball and socket joints provide an excellent range of motion. These types of joints can be found at the shoulder and hip, which allow humans to swing our arms and walk freely. Ball and socket joints typically involve a bone with a large, rounded head feeding into a deep groove of another bone. These joints are also commonly subject to arthritis and degradation with age.

Hinge joints work like a door, opening and closing in one direction. These joints are identified by a rounded end of a bone that sits within a notch of another joint. These notches are similar to the grooves seen in ball and socket joints, but don't allow for the same level of mobility and aren't typically as deep.

Condyloid joints allow for a moderate range of motion. They are typically able to move in two perpendicular axes. Condyloid joints are seen in the fingers where the finger connects to the palm. These joints are also sometimes referred to as ellipsoid joints because two rounded bones come together to form this joint.

Saddle joints are called that because it appears that one bone covers the next bone like a saddle. A convex bone sits nestled in the concave portion of another bone. These joints allow for an intermediate range of motion between a ball and socket joint and a condyloid joint. An example of this is the thumb, which has a great range of motion but isn't as movable as the shoulder.

See the list below on specific examples of each joint type.

Outside of this articular capsule, the joint has several ligaments that connect the bones together. These strengthen the joints and keep them secured in place to prevent the bones from separating.

Synovial joints may (but don't always) contain the following structures:

Parts of a Synovial Joint

The synovial joint contains several important components. First, it must include two bones that meet together. It must also contain a capsule that is filled with fluid at the junction of the two bones, and ligaments that provide structure and report. Finally, it must be mobile. Any other features such as types of nerves, vascular structures, and musculature will vary with the type of synovial joint and where its located within the body.

Muscles work by contracting and shortening in length. There are several types of movements that occur at synovial joints and they are all achieved by the shortening of muscles.

Other Types of Joints

Synovial joints can also be classified by the number of axes they contain.

While synovial joints are the most abundant joint in the body, they are by far the only ones we see. For more information on other types of joints, read up on cartilage and fibrous joints, which offer much more stability but less overall mobility.

Joints in the body are classified in multiple ways.

All synovial joints are diarthrosis joints, and are classified as uniaxial, biaxial, or multiaxial depending on how many planes they are able to move on. There are six different types based on their movement:

These joints are all created by a combination of movement that include abduction (spreading limbs apart), adduction (adding limbs together), flexion (pulling a limb up), extension (extending a limb out), supination (rotating a limb medially), and pronation (rotating a limb laterally). Synovial joints have an articular capsule surrounded by the synovial membrane that is filled with synovial fluid to prevent friction. Synovial joints may also have articular nerves to aid in sensory information of the joint and bursae to further reduce friction.

This activity will help you assess your knowledge of the six types of synovial joints in the human body.

For this activity, print or copy this page on a blank piece of paper. Use the words presented in the word bank to complete the sentence. Neatly write them on the appropriate blank space provided.

What is the function of the synovial joint?

All joints have different purposes. Fibrous joints provide strength and fuse two bones together. Cartilaginous joints provide structure and support and allow for slight mobility. Synovial joints function to provide movement. They're what allow us to turn our head, pick up our pencil, and walk across a room.

What are the 6 characteristics of synovial joints?

Which joints are synovial joints?

What are the 6 types of synovial joints?

Synovial joints are described based on how they move and the anatomy of the joint. The six joint types are saddle, pivot, hinge, ball and socket, condyloid, and gliding. Ball and socket is the most mobile, while gliding is the least mobile.

Types of Joints & Joint Structures in the Body

Pivot Joint Examples & Movement | What is a Pivot Joint?

Hinge Joint Examples, Movement & Types | What is a Hinge Joint?

The Types of Broken Bones and Luxations

What Are Ligaments? - Definition & Types