What is a Terrestrial Ecosystem? 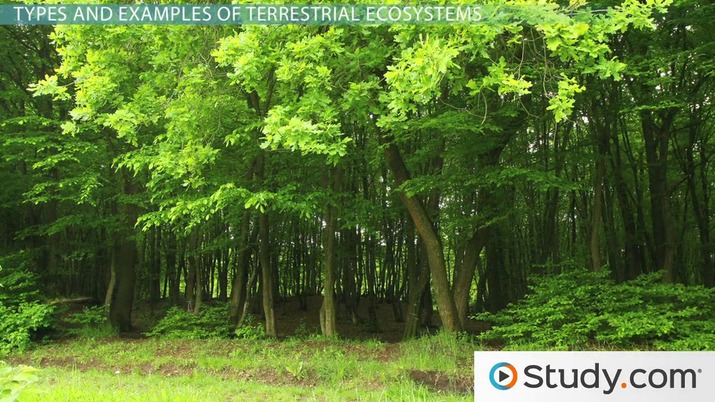 Try it now
Back
Coming up next: Temporal Isolation: Example & Definition

Terrestrial ecosystems on our planet can be further divided into six major types, namely taigas, tundra, deciduous forests, grasslands, desert, and tropical rainforest ecosystems. These classifications of distinct ecosystems are based on common features, such as their geographical characteristics (e.g., temperature, precipitation, soil, etc.) and the type of vegetation and other living organisms found in them.

The Taiga ecosystem can be found directly below the arctic circle, in the northern regions of North America, Europe, and Asian continents, primarily in the countries of Canada and Russia. This ecosystem covers over 17% of the total land on Earth and is characterized by the presence of coniferous, evergreen trees. Other distinct features of the taiga terrestrial ecosystem include its long and cold winters and high amount of yearly precipitation. The animal species of the taiga are often either able to change fur color, hibernate or migrate, which are all strategies that can help them survive the harsh winter season. Some examples of well-known taiga animals include lynx (Lynx canadensis) and moose (Alces alces). The dominant plant species of this ecosystem are the tall, coniferous trees (e.g., pine, aspen, and spruce), and the forest floor is often covered with species of fungi, such as lichens and mosses.

The Tundra ecosystem is primarily found in the arctic circles around the north and south poles of the earth. However, it can also occur at very high altitudes, such as on top of tall mountains. Tundra ecosystems are described as being cold and windy and are largely blanketed in a permanent layer of snow, except during summer months. They are primarily found in the state of Alaska (USA) and the countries of Greenland, Russia, Canada, and Scandinavian countries. Tundras are characteristically devoid of trees and are often considered deserts because of their low rainfall rates. Instead, vegetation found in tundra includes mostly moss, lichens, and small plants. Tundra soils are frozen for a major part of the year and permafrost - the phenomenon of permanently frozen soil - is common in these regions. Animal life found in tundra ecosystems includes polar bears (Ursus maritimus), Arctic hare (Lepus arcticus), reindeer (Rangifer tarandus), and ptarmigan (Lagopus genus)

Tropical Rainforest ecosystems are unique for having the greatest diversity of plants and animal species found in them. As the name suggests, tropical rainforests are found located between the tropic of Cancer and the tropic of Capricorn and are characterized by having abundant rainfall throughout the year. Vegetation in rainforests forms distinct layers such as the canopy which is occupied by tall trees, and the understory, which contains small shrubs, herbs, and young trees. The animal life found in tropical rainforests is extremely diverse, but a few examples include tigers (Panthera tigris), orangutans (Pongo pygmaeus), and sloths (Choloepus hoffmani.)

Desert ecosystems are characterized as being the driest of all ecosystems on Earth with a very low annual precipitation. Deserts can be found between latitudes 15 and 35 (in both the northern and southern hemispheres) of the Earth, and generally fluctuate between extreme hot temperatures during the day and extremely cold temperatures during the night. This extreme climate makes this ecosystem a harsh environment for living organisms, and the plant and animal species found here are highly adapted in order to survive. For example, desert plant species (such as cacti) are generally adapted to store and conserve water and remain dormant during dry periods. The majority of animal species found in deserts are reptiles, arachnids, or birds. However, mammal species (such as camels and ground squirrels) can also be found here. Desert animals generally have adaptations to evade drought conditions (e.g., through aestivation) or resist drought conditions (e.g., being nocturnal hunters and minimizing water loss through sweat/urination).

Three examples of terrestrial ecosystems are:

Some examples of terrestrial ecosystems are the Serengetti, a grassland ecosystem found in Africa; The Amazon rainforest, a tropical rainforest ecosystem in South America; and the Sahara desert, a desert ecosystem in northern Africa.

Make Your Own Ecosystem

This activity will have students researching different types of ecosystems and creating a model of their own in a plastic bottle. To carry out this activity you will need:

Before students get started, have them research what ecosystem they want to create a model of. Typically, succulent plants from the desert or chaparral do well, or small tropical plants from the deciduous forest or tropical rainforest.

Students should see plant growth over time if the greenhouses are constructed properly. A few things to look out for are over or under watering. It is important that students match the amount of water to what plants would experience in their natural habitat. Students should also consider the amount of sunlight that plants need. Some plants need partial sun, while others might need full sun to thrive.

How many terrestrial ecosystems are there?

There six key types of terrestrial ecosystems. They are:

What is meant by terrestrial ecosystem?

Terrestrial ecosystem is a term for those ecosystems that are land-based. They are different from the second type of ecosystem, marine ecosystems.

Why is terrestrial ecosystem important?

Terrestrial ecosystems are important because they house a large number of the worlds living organisms. They also provide valuable products to humans such as food, fuel and fibres.

What organisms are in the terrestrial ecosystem?

Terrestrial ecosystems provide habitat to all the world terrestrial or land-based organisms. This includes plant and animal species that are adapted to their specific ecosystem.

How to Find the Measure of Interior Angles of a Polygon

Grassland Food Chain Overview & Steps | What is a Food Chain?

How to Find the Measure of Interior Angles of a Polygon

Grassland Food Chain Overview & Steps | What is a Food Chain?