The Columbian Exchange was an exchange of plants, fruits, vegetables, disease, and other items between the Old World (Europe, Asia, and Africa) and the New World (The Americas) after the explorations of Christopher Columbus in 1492. An author by the name of Alfred Crosby wrote a book in 1972 in which he divided the exchange into categories including plants, disease, and animals and coined the phrase Columbian Exchange, which is representative of the explorations of Columbus leading to this transfer. 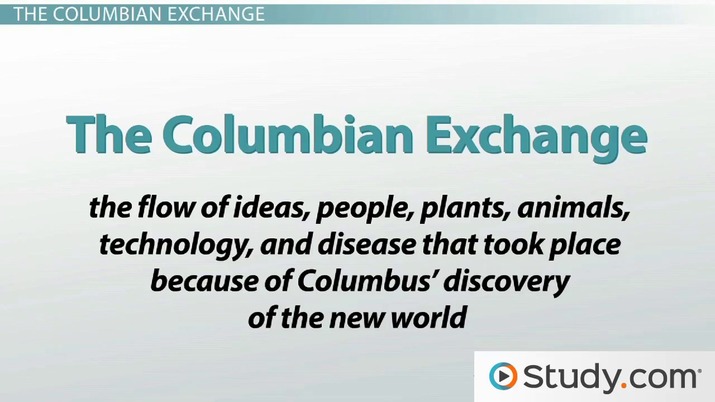 Christopher Columbus is known mainly as the sailor and explorer who was in search of a faster and easier way to reach Asia. However, his name is also synonymous with a specific event and that is the Columbian Exchange. In 1492, when Columbus left Portugal he had no idea he was going to find a treasure trove of new foods. In the New World, he was introduced to items such as peppers, tobacco, and chocolate. He would bring these items back to Europe to introduce them to society and then in 1493, he would bring items like horses, cattle, and pigs to the New World. Throughout the Age of Exploration, explorers and colonists would continue this exchange of crops and animals. Unfortunately though, there was a very dark downside to the new trade routes. Diseases would end up spreading rapidly killing many Natives in the new world and slavery would become a growing institution during this time.

Multiple diseases were exchanged wth in the Colombian Exchange. New diseases were so rampant in the Americas, that 90% of the native population was destroyed by diseases. Most notably smallpox was brought from the Old World to the New World. Since smallpox was a virus that only existed in the Old World, natives in the Americas did not have immunity to help fight the virus. This led to many native deaths. Sometimes Spanish Conquistadors would even use smallpox as biological warfare when attempting to conquer different societies.

Syphilis was another disease that was exchanged. Originating in the Americas it was brought to the Old World when explorers would return from their trip.

A tremendously negative event that occurred during the Columbian Exchange was that of slavery. Christopher Columbus first enslaved the Taino people that he encountered. Queen Elizabeth of Spain, the country Columbus was exploring for, had told Columbus that she wanted him to convert any Natives he encountered to Christianity. So, that is exactly what Columbus did. He forced them to convert to Christianity against their will and he enslaved them. Other explorers would follow this example. When Hernan Cortes invaded the Aztecs in 1519, he forced them into slavery and many others continued to do this.

Slavery existed prior to the Columbian Exchange, but usually as a result of conquest or crime. It was not until the Columbian Exchange, that slavery became a race based system, where humans were viewed as property. The new plantations in the Americas required a large amount of labor, and Europeans tapped into the slave market to fill the labor gap.

Between the 16th and 18th centuries, the economic system of a country tended to be one of mercantilism. Under this system, countries tried to accumulate as much wealth as they could, largely through trade and colonization. In order to create a profit, they needed to export more than they imported. This led to the Columbian Exchange transforming into the established Transatlantic Trade Route, also known as Triangular Trade.

Europe was the main player in this trading route. A European trader would depart from their country and head to West Africa. In West Africa, they would supply the Africans with guns, beer, cloth, money, and manufactured goods in exchange for enslaved people. The European trade ship would leave West Africa and cross the Atlantic Ocean, arriving in the Caribbean. This journey across the Atlantic was the most treacherous, often being referred to as the Middle Passage. Once in the Caribbean, slaves would be sold or bought and other goods like rum and sugar would be traded. After a short stop in the Caribbean, the European trader would head the English Colonies. Here more goods, like tea, fur, corn, tobacco, and cotton would be traded. The ship would now head back to Europe with raw materials from the colonies, further enriching the home country.

There was also a direct route between the Colonies and England. On this route, trade ships would sail back and forth exchanging raw materials from the colonies for manufactured goods from England.

One of the more important elements of the Columbian Exchange is that it increased food production around the world. Some Old World crops that did not grow easily in the Old World environment and climate, thrived in the New World, where there was a more favorable growing climate and soil. Sugar is one of these items. Sugar cane was brought from the Old World to be cultivated in the New World. Wheat, barley, and rice were also introduced in the New World and would grow to become staples in those areas. Horses, cattle, sheep, and pigs would be brought to the New World. The effects of this can easily be seen today. For example, in America, Texas has a tremendous cattle industry and Kansas has a large wheat industry. The Columbian Exchange paved the way for these crops and animals to come to America and become huge industries for those states.

Pros and Cons of the Columbian Exchange

The Columbian Exchange was an exchange of plants, fruits, vegetables, disease, and other items between the Old World and the New World after the explorations of Christopher Columbus in 1492, who was in search of a faster and easier way to Asia. Some of the items the explorers took back to the Old World include turkeys, tomatoes and habanero peppers. Some things the New World received from the Old World included things like sugarcane, coffee, and horses. While there were some great advantages to come out of the Columbian Exchange, there were also some very negative things, such as slavery and disease.

Prompts About the Columbian Exchange

In at least three to four sentences, define in your own words the Columbian Exchange.

Example: It began as a result of Christopher Columbus' discovery of the New World.

Write an essay of at least two to three paragraphs that discusses the discovery of the New World by people and civilizations prior to Columbus.

In about two to three paragraphs, explain why Columbus' "discovery" of the New World was so important.

Hint: Consider the changes brought about by the subsequent Columbian Exchange.

Write an essay of approximately one to two pages that analyzes the positives and negatives of the Columbian Exchange.

Example: A negative could be that many Native American populations were nearly eradicated as a result of the transfer of European diseases. A positive could be that the Columbian Exchange expanded the global food market.

Make a list of at least five items that were part of the Columbian Exchange. The items can be specific (the lesson mentions peppers, for instance), or broader categories of items, such as ideas.

What happened during the Columbian Exchange?

During the Columbian Exchange, people, plants, animals, and disease were exchanged across the Atlantic Ocean. The voyages of Columbus started an Age of Exploration in which explorers took goods from the Old World to the New World and vice versa.

What was the impact of the Columbian Exchange?

The Columbian Exchange impacted trade around the world. Food items, plants, animals, and people were exchanged. Food production increased and cultures became aware of other cultures across the Atlantic.

What was the Columbian Exchange and why is it important?

The Columbian exchange was the exchange of goods and people between the Old World and the New World during the Age of Exploration. It is important because it led to increased trade and food production across the globe. However, it also had a negative impact with disease and slavery.