Trevor D'Silva, Mark Pearcy
Learn about the domino theory and the importance of Eisenhower's speech that applied the theory to communism. Learn how the domino theory may have led the United States into the Vietnam War. Updated: 12/03/2021

What Is the Domino Theory?

The domino theory is a concept that if one domino strikes another, it can lead to a chain reaction where all the dominoes fall.

The fear of communism spreading from the Soviet Union who was America's ally in World War II against Nazi Germany began after the war ended. President Truman came up with the Truman Doctrine, which was based on the containment theory by the State Department and an expert on Russia, George Kennan. The Truman Doctrine stated that the United States would provide political, military, and economic assistance to all nations under democratic rule if they were under the threat from internal or external authoritarian forces.

President Dwight D. Eisenhower first put forth the idea that if the communists take over a country, then the next nearby country will fall and then the next until the whole area was under communism. This was based on the domino theory. When communist North Vietnam began attacking South Vietnam with the support of the Soviet Union and Russia, President Eisenhower began supporting South Vietnam by sending weapons and economic help to them.

After WW2 ended, the Soviet Union, immediately began to spread communism to the nations, which were under Nazi rule. They took over most of these Eastern European nations and East Germany towards the end of the war. In 1947, when the U.K. stopped funding Greece, Truman was worried that the Soviets would take over Greece and Turkey, and then that area would eventually fall to communism. The Greek Civil War was going on and the Communist Party Greece was trying to take control. Then the Soviets set their sights on Korea, which got the U.S. involved in the Korean War, and then they began funding Ho Chi Minh's party Viet Minh during the French Indochina War, which made the Americans support the French. After the war, the Soviets supported communist North Vietnam and the Americans were allied with South Vietnam.

When Eisenhower became president in 1953, the First Indochina War was going on. In North Vietnam, it was the communist leader and nationalist Ho Chi Minh who with the Viet Minh forces were fighting with the French. After the French withdrew in 1954, Indochina was renamed Vietnam and was divided into North Vietnam and South Vietnam. South Vietnam was under the democratic rule of President Diem. When the Vietnam War began in 1954 between North and South Vietnam. Eisenhower chose to invest huge sums of money and prestige into transforming South Vietnam into a ''free Asia''. He also sent military advisers, who supported the brutal tactics of the South Vietnamese regime of Ngo Dinh Diem. The intention was to help create a pro-American bastion in the Southeast and stop the spread of communism.

France was only involved in the First Indochina War against the Viet Minh, who were the communist forces under Ho Chi Minh. They wanted to regain Vietnam/Indochina as their colony. After they were defeated by the Viet Minh forces at Dien Bien Phu, they withdrew from Vietnam, but they stayed away from the Second Vietnam War. Charles De Gaulle warned Kennedy that Vietnam would be a bottomless military and political swamp. But his advice was never heeded.

Like China, Soviet support for North Vietnam was crucial during the war. They helped support Hanoi with information, technical advisors, and also moral support. In 1965, the USSR signed a defense treaty and it would provide financial aid, military equipment, and advisors to North Vietnam. In November 1968, a new set of military and economic agreements were signed between the two nations. The Soviets agreed to supply food, petroleum, equipment, metals, arms, and other commodities to help strengthen the North Vietnamese army. 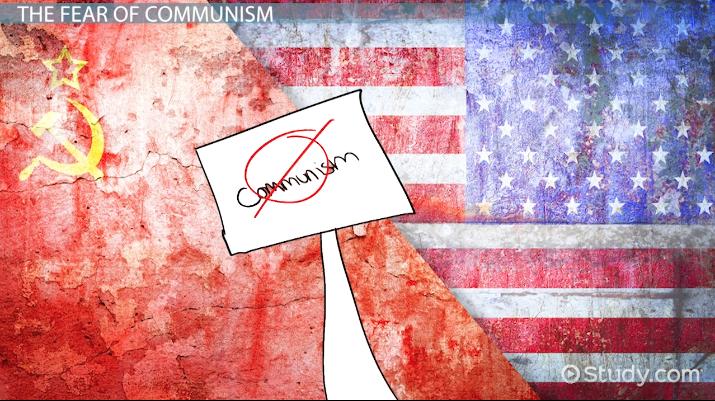 Coming up next: Vietcong: Definition & Tactics

Eisenhower gave a press conference on April 7, 1954. He laid the first major defense of the domino theory. He cited the Indochina War, which was going on between the French and the Viet Minh who were the communist forces from North Vietnam. He began by stating how economically important Vietnam was to America and he then put forth that region as an example for his ''falling domino principle.''

Therefore, if South Vietnam fell, Laos would be next and after that Thailand, Burma, and other countries in the region, and then finally India, which was the ally of the U.S. Eisenhower even warned that Japan, could also be in danger of falling like a domino to communism.

The significance of the domino theory is that because of it, the U.S. entered into the war on the side of South Vietnam to help them overcome the communist forces of North Vietnam, which were getting their support from the Soviets and the Chinese. Ho Chi Minh, the leader of communist North Vietnam at his capital Hanoi, wanted to unite the two regions which had been divided at the 17th parallel after the First Indochina War. He wanted to model Vietnam after the Soviet Union and China.

Eisenhower explained that if Vietnam fell, then Laos, Burma, Thailand, and other regions would fall and soon communism would reach the borders of India, a strong U.S. ally. He even warned that Japan could fall.

As South Vietnam fought with North Vietnam and also the Vietcong, President John F. Kennedy sent more advisors and Green Berets to South Vietnam, but this time they were allowed to fire back if attacked by the North Vietnamese. However, in 1963, three events occurred which changed the course of the war. In January, at the Battle of Ap Bac, North Vietnam defeated the South Vietnamese, but thanks to American might, there was no total loss. Then-President Diem was assassinated on Nov 3, 1963, because he tried to suppress the Buddhist majority. The relationship between Diem and Washington D.C. had deteriorated. Then Kennedy was assassinated on November 22, 1963.

President Lyndon Johnson escalated the war in Vietnam after the Gulf of Tonkin Incident in 1964, when it was alleged that the North Vietnamese forces attacked two U.S. warships. Congress passed the Gulf of Tonkin Resolution and Johnson started sending troops to Vietnam using the domino theory as justification for his actions. Operation Rolling Thunder was started to bomb North Vietnam. In 1968, when the Tet Offense began, Americans saw the realities of the war on TV and realized that the war was futile. Anti-war sentiments rose after that.

When Nixon came to power, he started a process called ''Vietnamization,'' where he wanted to scale back American presence and slowly allow the South Vietnamese to take over. He began bombing Laos and Cambodia and that increased the anti-war sentiments. In 1973, the Americans withdrew and in 1975 the North Vietnamese forces entered Saigon, which was the capital of South Vietnam, and united the nation.

President Nixon wanted to end the war with ''peace and honor.'' He started the process of ''Vietnamization.'' Anti-war sentiments began to grow in the U.S. as the war continued. Finally in 1973, after the Paris Peace Accords, America withdrew from Vietnam.

America's involvement in Vietnam, caused that area to become destabilized. The U.S. invading Cambodia in 1970 to destroy Vietcong bases, caused an uprising and violent takeover by the Khmer Rouge (a radical communist group). It launched a genocidal campaign against its own people and that resulted in the deaths of between 1.5 and 3 million Cambodians.

The slippery slope logic of the domino theory has fallen out of favor. Parallels of it remain especially in debates and in regions like the Mideast. However, from the lessons learned in Vietnam, it serves as a caution against any open-ended military action with no means of providing a clear end.

Communist regimes in the 1970s were Poland, East Germany, Hungary, and other eastern European countries. Communism ended in these countries when it fell in 1989 and when the Soviet Union dissolved in 1991.

The domino theory was a concept that was put forth by President Dwight D. Eisenhower in 1954. It stated that the failure to act could lead to a series of cascading events, and all of it could be worse than the previous one. It was developed after WW2 as a military and diplomatic justification for the U.S. to get involved in Vietnam and around the world. Communism was considered to be dangerous to American values and interests and it was the main reason it was used to prevent the spread of communism.

In hindsight, the domino theory proved to be only a theory. Communism didn't spread around the world or throughout Southeast Asia. Ultimately North Vietnam took over South Vietnam in 1975, and the U.S. involvement in the war caused further destabilization. This allowed Vietnam's neighbor Cambodia to be taken over by the Khmer Rouge, a communist group.

Did the domino theory justify the U.S. war in Vietnam?

No, the domino theory did not justify the war in Vietnam. After Vietnam fell, the whole Southeast Asia region did not fall. The war in Vietnam was a waste of time, money, and American lives and also that of millions of Vietnamese people. It also caused the destabilization of that area and the Khmer Rouge took over Cambodia and started genociding its own people.

What is the domino theory and how did it impact U.S. foreign policy?

The domino theory states that if one country capitulates and falls to communism, then the rest of the neighboring nations would fall one after another like a row of dominoes.

It impacted the U.S. foreign policy because it set the stage for the U.S. to intervene in any conflict around the world by providing equipment and troops all for the sake of keeping America safe.

Vietnam War Casualties & Statistics | How Many People Died in the Vietnam War?

Guerrilla Warfare in the Vietnam War