Edgar Allan Poe's 'The Masque of the Red Death'

Another possible influence to the story is history itself. In the mid-1300s, the Black Death killed over 20 million people, a third of the continent's population. A later plague struck in the 1660s and wiped out a quarter of London's population. Plagues in Medieval Europe were fairly common and would provide plenty of examples to influence Poe's story.

Like the writing of Nathaniel Hawthorne and Herman Melville, Poe's writing falls into the category of Dark Romanticism. The Dark Romantics were a sub-genre of Romanticism, which was more a celebration of beauty, nature, and life. As the name implies, Dark Romanticism explore the grim and frightening nature of humanity and death. The Dark Romantics embodied evil in figures such as Satan, vampires, ghouls, ghosts, and devils. This was the far end of the spectrum from Romantics and Transcendentalists, who thought there was perfection in mankind. 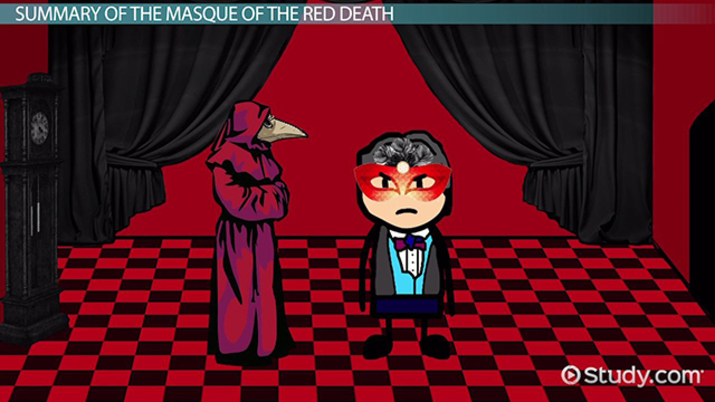 Coming up next: Baroque Literature in England: Writers & Characteristics

'The Masque of the Red Death' Summary

In "The Masque of the Red Death", a plague is sweeping the countryside. It kills quickly and in a grotesque manner. The victim develops red blotches and bleeds through the skin. Prince Prospero invites one thousand people to his abbey fortress to be the designated survivors as the plague ravages the kingdom. Those invited believe they have been spared this horrible death and have eluded the plague. The gates are sealed and no one can enter or leave.

After six months, Prince Prospero throws a masquerade ball and encourages his guests to dress as grotesquely as possible. During the evening, the orchestra stops for the great wall clock to sound the hour and then resumes. A tall figure arrives, more horrifying than the other guests, and everyone is terrified. The prince is enraged and rushes forward with a dagger, but the tall, gaunt figure turns and the prince falls dead to the floor. The guests seize the tall figure and find nothing beneath the mask and cape. In the end, everyone lies lifeless from the Red Death.

'The Masque of the Red Death' Symbolism, Motifs, and Literary Devices

There are several examples of symbolism, motifs, and other literary devices in "The Masque of the Red Death".

'The Masque of the Red Death' Rooms

The seven colored rooms are thought to represent the seven stages of life. They begin in the east and head west like the sun toward the end of the day. The room colors and their meanings are as follows:

The black room has a red window, which casts an eerie light over its interior. Red can mean intensity as it is part of the color purple, which is blue and red together, or the early growth in life. But in the story, death by the plague comes with red splotches and blood on its victims.

The focus in the story is the masquerade ball, which takes place in seven adjacent rooms, each lit in a different color to symbolize the stages of life.

The last room is death. It has black velvet tapestries, but strangely, the window bears a scarlet color that casts a blood-red hue on the room. The end comes in this room, where the tall visitor, or the Red Death, infects Prospero and everyone there.

The clock is an imposing symbol of time, passing and winding down to the end. In this story, it has a haunting effect on all present as each hour is noted by all and everything stops. It has a monotonous clang and is given its own sort of life with its "brazen lungs". When the clock struck, the musicians were "constrained to pause" and dancers all "ceased their evolutions". Ceasing evolution almost implies an hourly death. All were distressed by this, and the "giddiest grew pale". When it would finish, there followed "a light laughter" and the "musicians looked at each other and smiled as if at their own nervousness and folly."

All seem to sense something disconcerting about this hourly reminder that time is passing.

The castellated abbey is described as a fortress with high, impenetrable walls. It symbolizes safety and protection, and in the context of a plague, a sort of inoculation against infection and death.

The entire feeling of the masquerade ball, the odd disposition of the rooms and their strange colors, the moments where the "writhing dancers" and "swelling music" and the "giddiness" and the whole dizzying scene stops for the ominous chime of the clock. And the guests are all costumed in grotesque masks caught up in a revelry, as if celebrating the epidemic and the disfigurement of its victims. The entire effect is that of a distorted nightmare.

In Shakespeare's The Tempest, the character of Prospero is a magician who controls nature by creating a storm to bring his treasonous brother to him. In a similar way, Prince Prospero creates a safe place for his guest to weather the storm of the Red Death, thus believing he controls nature.

The story contains Biblical apocalyse allusions. In Genesis, the flood destroys all people except the ones chosen to survive in the ark. Prince Prospero's ark is his castellated abbey, which does not have an all-powerful blessing to protect it. Another biblical apocalyptic scene from Genesis that is similar to the Red Death killing everyone in Prospero's abbey is the destruction of Sodom and Gomorrah, where Lot and family (minus his curious wife) are the only ones spared from the divine destruction of the two places.

Denial is a motif in "The Masque of the Red Death", where Prince Prospero believes he can ignore the dying in his kingdom and elude the plague. He denies its capacity to seek out all people, which it does in the end. This denial is possibly also an acceptance of Prospero's powerlessness against the Red Death outside of the abbey walls but also a denial of the plague's power. The masquerade ball is held to celebrate their success in escaping the plague but with the grotesque costumes and masks, it seems almost a mockery of what is taking place outside the abbey walls.

Part of denial is distraction, where Prince Prospero is said to have "provided all the appliances of pleasure", which are a distraction to keep minds off of the death outside the fortress.

'The Masque of the Red Death' Themes and Analysis

In "The Masque of the Red Death", Poe employs several themes, including rich vs. poor and the inevitability of death.

There is a clear separation of rich and poor in this story. The rich buy protection, or think they do, while the poor are cavalierly sacrificed to the Red Death. While the plague may be beyond Prospero's control and he knows no other way, the behavior within the "safety" of the abbey is a distraction from thinking about the horror beyond the fortress walls. It carries a feeling of callousness and indifference toward the plight of other, a feeling of decadence.

While the seclusion in the abbey buys Prospero and his guest another six months of life, the ending demonstrates the powerlessness of man caught in the path of nature's destruction. Poe clearly demonstrates that people, no matter how important, good, or rich, cannot escape death.

'The Masque of the Red Death' Quotations

The following quote demonstrates the callousness of the wealthy prince and the arrogant belief that he could buy safety for himself and some others:

Another quote that supports Prospero's belief in invulnerability follows:

The moment that the guests realize that the tall figure is something distinctly foreign is a collective epiphany:

The catastrophic ending takes hold, and the party comes to an end:

The final death toll is made clear in the last line of the story:

"The Masque of the Red Death" (1845) by Edgar Allan Poe is a gothic allegory showing how people, no matter how wealthy or safely sealed behind castle walls, cannot elude death.

Plagues, such as the bubonic plague, or the Black Death, have long existed and reappeared across time. Two notable appearances were in the 1350s and the 1660s.

The main motif is denial.

The story's themes are rich v. poor and the inevitability of death. It shows this by revealing the hubris of Prince Prospero in thinking that by virtue of his wealth, he can outsmart death with his friends. But death is inescapable for all.

What is the disease in The Masque of the Red Death?

The disease is the Red Death, which causes the victim to have sharp pains and dizziness and then get red blotches and bleed through the pores.

What do the masqueraders symbolize?

The masqueraders represent the aristocracy because that's who they are. But they don't decide the theme of their costumes; Prospero tells them to be as grotesque as possible and they do. This seems a cavalier way of pretending they are the disfigured dying and the dead outside the abbey walls, all for amusement.

What is ironic about Prince Prospero's death?

It is ironic that Prince Prospero takes such comprehensive precautions to isolate himself and his guests from the Red Death and still, he dies.

What do the 7 rooms symbolize?

These seven rooms with their colors represent stages in life from birth represented by the color blue to death in black.

What does the mask symbolize in The Masque of the Red Death?

The mask can symbolize the grotesque victims of the Red Death outside the abbey walls. It also is worn by the plague itself, disguising itself to fit in with the revelers. This mask allows the disease to move freely among the masqueraders, undetected.

What is the main theme of The Masque of the Red Death?

The main theme of The Masque of the Red Death would be the inescapable nature of death. Even the seclusion of the abbey does not provide protection from the plague.

The Masque of the Red Death: Theme & Quotes

The Masque of the Red Death: Characters & Setting

Satire in The Devil & Tom Walker

How to Use and Interpret Hyphenation Conventions

The Pit and The Pendulum by Edgar Allan Poe | Summary, Analysis & Themes

The Devil and Tom Walker by Washington Irving: Summary and Analysis

Socratic Questioning: Definition & Use in Business

The Murders in the Rue Morgue by Edgar Allen Poe | Summary, Analysis & Characters

The Pit and the Pendulum: Theme & Symbolism

The Pit and the Pendulum: Setting & Characters