Sasha Blakeley, Stacy Redd
What is The Picture of Dorian Gray about? This lesson summarizes the story of Dorian Gray and explores characters, themes, and the book's author Oscar Wilde. Updated: 01/29/2020

The Picture of Dorian Gray Summary

The Picture of Dorian Gray is a Victorian novel that was originally published in 1890. It tells the story of Dorian Gray, a wealthy young Englishman who prizes his looks and his youth above all else. The basic plot of the novel is as follows:

The story's plot is actually quite a bit more complex than that, but essentially this is a tale about the dangers of vanity and the consequences of making a deal with the devil.

The Picture of Dorian Gray's plot begins with a painter, Basil Hallward, speaking to a friend, Lord Henry Wotton, about a portrait that Basil has just completed. The portrait is of a beautiful young man, Dorian Gray, with whom Basil is a little besotted. Dorian soon arrives to sit for Basil while he finishes the portrait and gets the opportunity to meet Lord Henry. Henry is a scandalously amoral man who believes only in the value of pleasure and hedonism; his manner of thinking seems instantly alluring to Dorian, despite Basil's warnings. Lord Henry warns Dorian that soon his youth and good looks will fade, and Dorian laments this, wishing that it were not the case. Little does he know, simply by stating this wish, he has brought a terrible curse upon himself.

Lord Henry becomes increasingly interested in Dorian in the months that follow, and Dorian is quickly taken in by his charming if dangerous philosophy. Dorian soon meets a young actress named Sibyl Vane with whom he falls in love. The two get engaged and Dorian seems happy. Sibyl's brother James is less than enthusiastic about the match. However, there is little that James can do, as he is about to move to Australia.

The Picture of Dorian Gray's summary continues at the theater. When Dorian brings Basil and Lord Henry to see Sibyl act, he is horrified when she puts on a terrible performance. She tells him that she can no longer pretend at being in love now that she has experienced true love with Dorian; as a result, she has decided to give up her career as an actress. Dorian immediately rejects her. When he returns home, he sees that his portrait has developed a sneer and abruptly realizes that his offhand comment about wanting to stay young has come true. He decides to make up with Sibyl the next day, only to learn that she has died by suicide because of his rejection of her. Instead of changing his ways, Dorian takes Lord Henry's advice and pivots into a life of hedonism where there seem to be no consequences. He decides to hide his portrait in a locked room.

Years pass, and Dorian continues to engage in sordid and hedonistic behaviors. Rumor about his actions surround him, but he dismisses them, even though his portrait grows ever uglier. Eighteen years after the portrait was first painted, Dorian meets Basil by chance. Basil confronts Dorian about his actions and talks about how he wishes he could see Dorian's soul. Dorian agrees and decides to show Basil the portrait that has been locked away for so long. Basil begs Dorian to repent of his actions, but Dorian refuses. He stabs Basil and kills him.

The final part of The Picture of Dorian Gray's synopsis starts with Dorian summoning an old friend, Alan Campbell, to his house. Alan is a scientist and Dorian asks for his help in disposing of Basil's body. Naturally, Alan refuses, so Dorian blackmails him by threatening to reveal a damaging secret. The book implies that the secret that Dorian will reveal is that he and Alan once had a sexual relationship. Alan reluctantly agrees to help Dorian, who then visits an opium den to deal with his feelings. There, he encounters James Vane, who threatens to kill him. Dorian escapes by claiming that he could not possibly be the man who rejected James's sister because he looks so young. James lets him go, but then realizes that he was wrong to do so.

Dorian becomes fearful, thinking that he can see James wherever he goes. However, during an accident at Dorian's estate, James actually gets shot and killed while Dorian and Lord Henry are out hunting. Relieved, Dorian returns to London, where he learns that Alan Campbell has died by suicide. After an uncomfortable conversation with Lord Henry where Dorian becomes convinced that he is unable to repent, he goes into the room where he keeps his portrait. It has become unspeakably ugly. He stabs the painting, attempting to destroy it, and his servants hear a loud noise and come to investigate. They find Dorian, now an old and ugly man, lying on the floor with a knife in his heart. His portrait shows a beautiful young man. 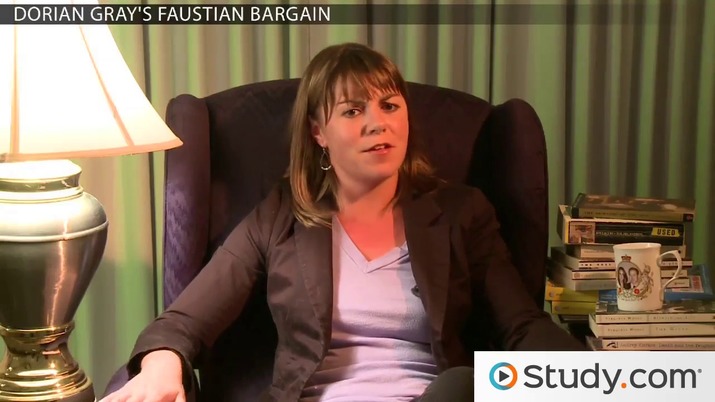 Coming up next: Introduction to George Bernard Shaw: Life and Major Plays

Who is Dorian Gray?

Who is Dorian Gray in the context of his story? Dorian is an interesting character who undergoes profound changes. When the book begins, he is just twenty years old. Lord Henry tells Basil that Dorian came from a troubled childhood and Basil warns Henry not to corrupt him. In many ways, Dorian is a kind of blank slate, able to be molded any which way. It is a shame, then, that the first major influence to come to him in his adult life is Lord Henry. Dorian turns out to be a superficial character throughout the book, which is exacerbated repeatedly by his connection to Lord Henry. Basil is essentially a good influence on Dorian, but he is not powerful or determined enough to overcome Lord Henry's impact.

Major Themes and Lessons within the Novel

Like all literary works, The Picture of Dorian Gray has many major themes that repeat throughout the story. The two most important of these themes are aestheticism and Faustian bargains.

Aestheticism is a philosophical standpoint that argues in favor of beauty for beauty's sake and art for art's sake. It is a philosophy that the book's author, Oscar Wilde, espoused in his own life. While there is nothing wrong with aestheticism as such, in The Picture of Dorian Gray, it evolves into hedonism. Hedonism is the pursuit of pleasure above all other things in life, rather than a simple appreciation of aesthetic beauty. Basil and his paintings represent aestheticism in the novel, while Lord Henry represents hedonism.

The story of Faust is a German legend that has been retold many times, most notably by Christopher Marlowe and Johann Wolfgang von Goethe. It is about a man who sells his soul to the devil in exchange for the ability to practice magic. After squandering his magical gifts, Faust is eventually dragged to hell where he suffers for all eternity. Dorian Gray also engages in a Faustian bargain: he sells his soul for the ability to remain young and beautiful. Unlike Faust, Dorian does not make this bargain on purpose, but the effect is the same: his choice cannot be undone.

Other Characters in The Picture of Dorian Gray

Dorian Gray is the titular and main character in The Picture of Dorian Gray, but his story would be nothing without a host of other characters. Each figure in the story has a particular role to play.

There are a few other minor characters in the novel, but none who appear for more than a handful of pages or have any significant bearing on the plot.

Who Wrote The Picture of Dorian Gray?

While Oscar Wilde was married and had children, he had relationships with men throughout his life. Eventually, Wilde was put on trial for his homosexuality, though his conviction was for ''gross indecency.'' During the trial, excerpts from The Picture of Dorian Gray were read to give credence to accusations against him because of the suggestive nature of, among other things, the relationships between Dorian and Alan Campbell and between Dorian and Adrian Singleton.

Other Work by Oscar Wilde

The Picture of Dorian Gray was the only novel that Oscar Wilde ever wrote. He also wrote some poetry, but he was most famous for his plays. Other notable works by Oscar Wilde include:

The Importance of Being Earnest is by far his most famous work besides The Picture of Dorian Gray. It is a comedy about two couples and their desire to get married.

The Picture of Dorian Gray is an 1890 novel by Oscar Wilde that tells the story of a young man named Dorian Gray. Dorian is superficial and wants to remain beautiful forever. He makes a Faustian bargain, selling his soul for youth and beauty, while his portrait becomes steadily uglier, to the point where Dorian eventually has to hide it. Other major characters in the story include:

What does the picture of Dorian Gray symbolize?

The picture in The Picture of Dorian Gray symbolizes Dorian's soul: as he becomes more corrupt, his sins begin to show on his portrait even though his outer complexion remains youthful and beautiful.

How does Dorian Gray die?

Dorian Gray dies when he stabs his portrait in an attempt to destroy it. His servants enter the room to find him dead on the floor, as ugly as his portrait once was, while the portrait looks beautiful once more.

What was Dorian Gray famous for?

Dorian Gray was not a historical figure; he is the fictional main character of The Picture of Dorian Gray by Oscar Wilde.

The Ballad of Reading Gaol by Oscar Wilde: Summary & Analysis

Rime of the Ancient Mariner: Summary and Analysis

Introduction to Romantic Poetry: Overview of Authors and Works

The Wind in the Willows: Summary, Characters & Author